Members of Congress on Tuesday heard directly from victims of military medical malpractice who are barred from suing the government due to a decades-old Supreme Court precedent known as the Feres Doctrine. 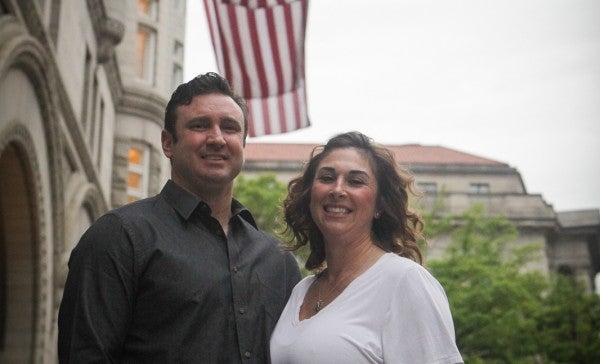 Members of Congress on Tuesday heard directly from victims of military medical malpractice who are barred from suing the government due to a decades-old Supreme Court precedent known as the Feres Doctrine.

Among those who testified was Army Sgt. 1st Class Richard Stayskal, a Green Beret whose lung cancer was overlooked during a routine CT-scan in January 2017 — the disease wasn’t properly diagnosed until late June of that year, and that was only after Stayskal’s health had deteriorated dramatically and he was finally given leave to see a civilian specialist off-base, as Task & Purpose previously reported.

Stayskal’s cancer has since metastasized and is terminal, and he is currently facing a medical separation from the Army.

“This does affect me obviously, but my children are definitely the true victims along with my wife,” Stayskal, who has two daughters, said during the hearing. “The hardest thing I have to do is explain to my children when they ask me ‘this doesn’t make sense, how is this happening?’ and I have no good answer to give them and that’s why I’m coming up here to help convince these folks in Congress to change this.”

Richard Stayskal and his wife Megan at the Trump International Hotel in Washington on April 29, 2019. (Task & Purpose/James Clark)

Alexis Witt, the widow of Air Force Staff Sgt. Dean Witt, also spoke before lawmakers. In October 2003, Witt’s husband underwent a routine surgery for acute appendicitis, but a series of errors — from moving Witt to the pediatric area, where undersized devices couldn’t fit a grown adult, mistakenly administering a lethal dose of fentanyl which led to respiratory and cardiac arrest, and improperly inserting a breathing tube — left the airman with severe brain damage. Three months later he was taken off life support.

Rebecca Lipe, a former Air Force judge advocate who endured a string of medical errors by military care providers that permanently damaged her reproductive system, also testified. Though Lipe is no longer in the Air Force, she is eligible to receive military health care through her husband, who’s in the Navy, but she testified that after her experience, she’s “completely lost faith in the DoD to take care of me.”

“Instead I pay an exorbitant amount to pay for my private insurance with my current employer because I don’t trust them,” Lipe added. “I will not let them touch me or my daughter because I no longer trust they can take care of us appropriately.”

Despite the mistakes made, Witt, Stayskal, Lipe and other medical malpractice victims are barred from suing the federal government for negligence and wrongdoing due to the Feres Doctrine.

“It is disrespectful and shameful that for 69 years Congress has refused to give them the same rights as everyone else,” Speier added.

“No one should have to experience what you have experienced. Our service members who have sacrificed so much deserve the best medical care we can provide,” said Rep. Trent Kelly (R-Miss.) the subcommittee’s ranking Republican. “Even if the Feres Doctrine is changed, we know it will not make you and the other victims of military medical malpractice whole … therefore we must prevent these mistakes from happening again.”

The Feres Doctrine was established in 1950 by Feres vs. United States — a Supreme Court case involving the Federal Tort Claims Act that allows citizens to sue the government for negligence or wrongdoing. In Feres, the Court found that the federal government could not be held liable “for injuries to members of the armed forces arising from activities incident to military service.”

In layman’s terms, the Feres Doctrine prohibits troops and their families from suing the military for injury or death brought on by their service. In the decades since the rule was established, it has been broadly applied to incidents far from the battlefield, to include training mishaps, to sexual assault, and medical malpractice.

Critics of Feres argue that it leads to a double standard in cases where victims seek monetary damages: One set of rules for civilians, and another for those in the military. For example: If a service member and a military dependent saw the same military doctor on base, for the same ailment, and the same mistakes were made in both cases, the civilian patient would be able to sue for medical malpractice; the service member would not.

“We should treat a civilian-like wrongful act, like on-base medical incompetence or sexual assault, in the same way those get treated in the civilian world, because for all intents and purposes they are occurring in a civilian context,” Dwight Stirling, the CEO of the Center for Law and Military Policy, told Task & Purpose in a phone interview last week. “There is nothing inherently military about the routine appendectomy that occurs at the hospital at Camp Pendleton … that same type of procedure could have occurred right down the street at the City of Oceanside at a private hospital.”

Stirling, who testified before the subcommittee, described the Feres Doctrine as “the most disparaged and discredited legal doctrine in modern history,” and argued that it unfairly impacts junior enlisted personnel who have no choice but to receive care at military hospitals on base, unlike higher ranking military personnel, who Stirling said have the financial and personal freedom to go off-post for their care, and thus retain the right to sue should an issue arise.

Even so, the Feres Doctrine wasn’t without its defenders during the hearing.

“Simply put, Congress should not alter the Feres Doctrine,” Paul Figley, a professor of Legal Rhetoric at American University Washington College of Law, testified. “Doing so would disrupt the vital and special relationship between the government and its service members.”

“If three service member amputees share a hospital ward, one having lost the leg in combat; one suffering the same loss in a tank accident in France; and one because of malpractice by a military doctor in New York, each will have the full panoply of military benefits,” Figley explained. “The two who suffered their loss in combat or overseas would be barred from suing … and the [Federal Tort Claims Act] suit by the one injured in New York would likely recover a million dollar judgement and the other two service members would know it and may very well feel unfairly treated. Such feelings undermine military morale and cohesion. This is not an idle concern.”

Because the Feres Doctrine is a Supreme Court precedent it can only be changed two ways: One is through a Supreme Court decision to overturn the 1950 ruling, and there’s been some progress on that front — there’s a petition before the nation’s highest court to hear the wrongful death case of Navy Lt. Rebekah Daniel brought by her widower Walter Daniel. Even so, it takes years for a case to reach the nation’s highest court, and there’s no guarantee it’ll be heard: The Supreme Court only hears about 80 of the 7,000 to 8,000 cases submitted each term.

In Witt’s case, it took her seven years to get her husband’s wrongful death case to the Supreme Court, but in 2011, but the court declined to hear it, Stars and Stripes reported at the time.

Stayskal, along with his attorneys at the Tampa, Florida-based Whistleblower Law Firm, told Task & Purpose they intend to file a lawsuit in federal court this week, but due to the Feres Doctrine, his case will almost assuredly be barred, and then he and his lawyers will begin a long slog through the court system before they finally have a chance to petition the Supreme Court, like Witt, and Daniel.

The other way to change Feres — and possibly the best chance advocates and medical malpractice victims have at repealing the legal rule — is through Congress, in the form of a legislative fix to the Federal Tort Claims Act.

Currently, there’s a bill in the works, named after Stayskal, that aims to do just that by allowing victims of military medical malpractice to sue.

And for Stayskal, addressing Congress directly provides an opportunity to put a human face to his story, and those like him.

One of the challenges to garnering public and Congressional support to change Feres is that it’s not a problem that impacts a great number of people, Stayskal explained.

“I think it’s a small number that’s just forgotten about and that’s really easy, when you’re not a large mass,” he told Task & Purpose. “It’s one of those things where ‘if it doesn’t happen to you, what do you have to complain about,’ you know? It doesn’t affect you until the day it affects you.”

Because of the ordeal he’s been through, Stayskal testified that his faith in the military healthcare system has been shaken.

“I believe it violates the trust completely. When I signed up to do my job I was told ‘this is your job you will do this to the best of your abilities no questions asked,'” he said during the hearing. “I believed that when the DoD said they’d provide me adequate medical care to a standard, and they failed that portion. My trust is completely broken.”

Stayskal and his attorney’s said their hope is to see the Feres Doctrine changed so medical malpractice victims will have a chance to seek legal recourse, and see bad or negligent care providers held accountable.

“There’s this idea that changing Feres means there’s an insurmountable number of lawsuits against the government,” Daniel Maharaj, one of Stayskal’s attorneys with Whistleblower Law Firm, told Task & Purpose. “That’s not going to be the case and I think a closer look at this is going to show that, and over time this is going to correct the system and these issues from occurring because you don’t have the shield to go behind.”

As for Stayskal’s wife, Megan, she said she wants lawmakers to put themselves in her husband’s place, and to consider how they’d feel if it was their family and their children who would be left without legal recourse, simply because their family member was in the military when a medical mistake was made.

“I’ve kind of thought about this, but never really said the words aloud, but I’d ask them to put themselves in his shoes,” Megan Stayskal told Task & Purpose. “What would they want to see if it was them. How would they think that justice should be served?”