The legislation would allow service members and their families to sue the government when a member of the military is a victim of military medical malpractice. 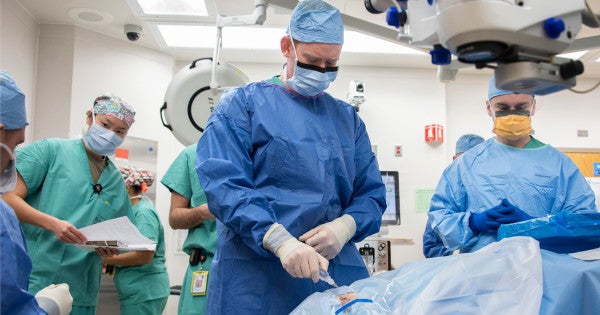 Lawmakers introduced legislation on Tuesday that would allow service members and their families to sue the government, in certain cases, when a member of the military is a victim of military medical malpractice. The bill was introduced by Rep. Jackie Speier (D-Calif.) the chairwoman of the House Armed Services Subcommittee on Military Personnel, and includes co-sponsors from both sides of the aisle.

The news comes the same day that members of the subcommittee heard from military medical malpractice victims, and bears the name of Sgt. 1st Class Richard Stayskal, who testified at the hearing. A Marine infantryman and Purple Heart recipient who went on to join the Army and become a Green Beret, Stayskal has terminal lung cancer, and has become a symbol for advocates who want to see a change to the Feres Doctrine — a 1950 Supreme Court precedent that bars lawsuits against the military “for injuries to members of the armed forces arising from activities incident to military service.”

As Task & Purpose previously reported, Stayskal’s cancer was missed during a routine CT-scan in January 2017 at Fort Bragg’s Womack Army Medical Center in North Carolina. The disease wasn’t properly diagnosed until June of that year, and that was only after his health had deteriorated dramatically and he was finally given leave to see a civilian specialist off-base.

“This does affect me obviously, but my children are definitely the true victims along with my wife,” Stayskal, who has two daughters, said during Tuesday’s hearing. “The hardest thing I have to do is explain to my children when they ask me ‘this doesn’t make sense, how is this happening?’ and I have no good answer to give them and that’s why I’m coming up here to help convince these folks in Congress to change this.”

Because of the Feres Doctrine, Stayskal and his family are barred from suing the government for damages. If the Sergeant First Class Richard Stayskal Military Medical Accountability Act of 2019 were to pass, that could change, not only for the Staykals, but other service members and their families.

The bill would create an exemption to the Federal Tort Claims Act — a law which allows citizens to sue the government for negligence or wrongdoing — and allow them to file medical malpractice lawsuits. However, it would only cover cases that are still pending on, or occur after the bill’s passage, as a way to limit costs, according to a press release provided by Speier’s office.

Because Stayskal and his attorney’s have already filed their malpractice lawsuit in federal court, their case would be covered if the bill passed, said Natalie Khawam, one of the attorneys representing Stayskal.

“Today, the American people saw Congress take action,” Khawam told Task & Purpose. “We are one step closer to protecting our troops and their families. I’m humbled to represent Sgt. 1st Class Richard Stayskal, and honored to fight for of all the men and women that serve our country.”

Additionally, the bill would have no impact on those instances of medical malpractice that occur during combat operations, aboard ships, or at battalion aid stations.

Under the proposed bill, service members would be able to sue for malpractice that occurs at major military clinics and hospitals, where both civilians and military personnel are already treated.

“The Feres Doctrine is a travesty,” Speier said in a statement. “It denies service members who put their lives on the line for this country the same access to the justice system enjoyed by service members’ spouses, other federal employees, and even prisoners. Creating an exemption for medical malpractice is long overdue.”

One of the major critiques of the Feres Doctrine is that it creates a double standard: One set of rules for civilians, and another for those in uniform. For example: If a service member and a military dependent saw the same military doctor on base, for the same ailment, and the same mistakes were made in both cases, the civilian patient would be able to sue for medical malpractice; the service member would not, as Task & Purpose previously reported.

“Representing the men and women stationed at Fort Bragg and their families is one of the greatest honors of my life,” Rep. Richard Hudson (R-N.C.) said in a statement. “My priority is doing right by my constituent Rich and making sure our service members and their families receive the support and top-notch health care they were promised.”