An online petition calling on Congress to change the Feres Doctrine, a 68-year-old legal rule that bars service members and... 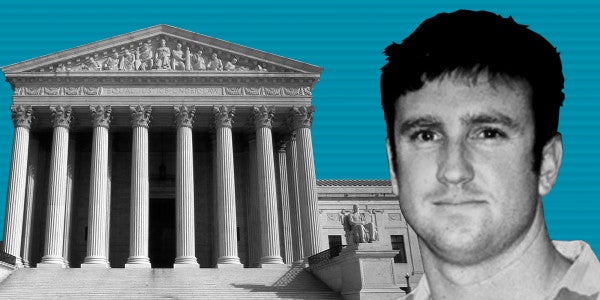 An online petition calling on Congress to change the Feres Doctrine, a 68-year-old legal rule that bars service members and their families from suing the government for negligence or wrongdoing, has reached more than 17,000 signatures.

The petition was published to Change.org after a Fox 46 News investigation, and a separate piece on Task & Purpose covered the story of Army Sgt. 1st Class Richard Stayskal.

A 37-year-old Green Beret and Purple Heart recipient, Stayskal and his attorneys with the Whistleblower Law Firm allege that medical personnel at Fort Bragg’s Womack Army Medical Center in North Carolina failed to diagnosis his lung cancer during a routine health screening in January 2017, as Task & Purpose previously reported.

It wasn’t until a June 2017 consultation with a civilian pulmonologist — after months of declining health, which included coughing up blood, and repeated attempts to have his appointment with a specialist moved up — that Stayskal learned he had lung cancer. The cancer is now stage IV and has metastasized to his pelvis, spinal bones, lymph nodes, liver, and spleen. Doctors estimate he may only have a year to live.

“I feel like my life has been stolen from me because people failed to do their job,” Stayskal told Task & Purpose.

Stayskal’s attorneys intend to bring their allegations of medical malpractice to U.S District Court in the Eastern District of North Carolina, where they’ll have a chance to submit evidence to support their claim. Because of the Feres Doctrine, that may be as far as it goes.

The legal rule was established in 1950 by the Supreme Court in Feres vs. United States, a case involving the Federal Tort Claims Act — a law which allows citizens to sue the government for negligence or wrongdoing. As Task & Purpose reported previously, the Supreme Court dismissed a lawsuit brought by the widow a soldier who died in 1947 when his barracks caught fire due to a defective heating system, and ruled that the federal government could not be held liable “for injuries to members of the armed forces arising from activities incident to military service.”

In the years since the ruling, that particular line — “incident to military service” — has been broadly interpreted to apply to a range of instances from military sexual assault, to training, and medical malpractice.

On Nov. 27, a Federal judge dismissed a $100-million lawsuit against the Marine Corps brought by the family of Raheel Siddiqui — the case was barred due to the Feres Doctrine. A Marine Recruit who died at Parris Island in April 2016, Siddiqui’s death led to a series of investigations into egregious hazing incidents at the Recruit Depot.

“The Feres Doctrine ignores the plain language of the [Federal Tort Claims Act] and has led to unfair, absurd, and inconsistent results that treat service members differently than the rest of us,” reads the petition, which was published online earlier this month by a family friend of the Stayskal’s on behalf of Whistleblower Law Firm.

“Most commonly, the Feres Doctrine has been used as an unfair defense that military medical personnel hide behind when such personnel fail to provide the basic care that would save a person’s life just because they are on active duty,” notes the petition.

Since the Feres Doctrine is a Supreme Court precedent it can only be changed one of two ways: Either by overturning the original ruling — there’s currently one petition for a military medical malpractice lawsuit awaiting a decision from the nation’s highest court; or, Congress could pass a law to amend the Federal Tort Claims Act.

“The main issue that we would like Congress to address with the Feres Doctrine is that the Court’s interpretation has broadened the scope of the exception currently codified in the FTCA to encompass injuries that occur from non combatant activities in a time of peace,” reads the petition, which calls on Congress to amend the Federal Tort Claims Act to make an exception for cases where injury or harm occurs not on the battlefield, but stateside, in the same hospitals where civilian dependents are treated alongside service members.

Among critics of the Feres Doctrine, the frustration stems from what many see as a double standard — one set of rules for civilians, and another for service members. For example, if a service member and a military dependent go to the same on-base hospital, receive the same treatment from a military doctor, and the same mistakes are made in each case, the law treats them differently.

“The one who was on active duty cannot bring a claim under the Federal Tort Claims Act; the one who is a dependent, can,” Eugene R. Fidell, who teaches military law at Yale Law School, told Task & Purpose previously.

“And so you have tremendously disparate outcomes based on the same professional shortcomings simply as a function of whether the victim of the malpractice is on active duty or not.”

Titled “Tell Congress to Protect Our Troops from Negligent Medical Care – Amend the Feres Doctrine,” the petition can be found here on Change.org.

SEE ALSO: ‘It’s A Scandal’ — Inside The Fight To Hold The Military Accountable For Medical Malpractice