The Navy Won’t Pay Damages To People Who Drank Camp Lejeune’s Toxic Water, But It Is Throwing Money At Its Broke Aircraft Carrier

"This was a difficult decision, to be frank with you. It would have been easier not to make the decision and have this thing just tick on." 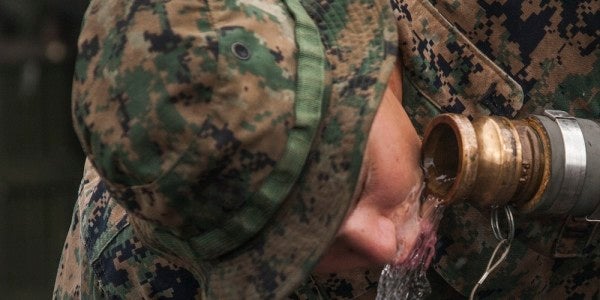 The Navy can afford an aircraft carrier that doesn't work, but it can't put any money aside for people who may be suffering after drinking contaminated water at Camp Lejeune, North Carolina.

To be fair, the Navy Department faced a total of $963 billion in claims from former service members, family members, and employees who have filed more than 4,400 lawsuits claiming they were harmed after drinking water at Lejeune that contained dangerous chemicals, Navy Secretary Richard Spencer said on Wednesday.

It is estimated that people at Lejeune could have been exposed to the toxins between 1953 and 1987, Spencer said at a Pentagon news briefing. But in December 2016 a federal judge ruled the Navy Department was not liable for damages, in part because the industrial chemicals found in the drinking water were not regulated until 1989, and the Feres Doctrine prevents service members and their families from suing the U.S. government.

“The court decision has made it clear there is no legal basis nor ability for the Department of the Navy to pay these claims,” Spencer said. “Based on these decisions and my assessment of the facts as well as advice and recommendations from both the Department of Justice and the Judge Advocate General of the Navy, I have approved denial of the remaining claims.”

Spencer stressed that he would prefer to give the claimants some money, but he does not have the legal ability to do so. He added that the decision does not affect any disability compensation or other benefits from the Department of Veterans affairs that the claimants are currently receiving.

“This was a difficult decision, to be frank with you,” Spencer said. “It would have been easier not to make the decision and have this thing just tick on.”

When Task & Purpose asked Spencer why the Navy has no money for the claimants, yet it can spend $13 billion on the Gerald Ford aircraft carrier — which recently got one of its 10 elevators to actually work — he was less than pleased.

“You understand the appropriations process in the government?” Spencer responded. “You can't spend money unless it's appropriated. I do not have the capability to put these funds to this.”

Then Task & Purpose noted that the Navy Department could ask Congress for money to compensate the claimants in the fiscal 2020 National Defense Authorization Act.

“And the Gerald Ford actually does work,” he continued. “If you'd like to have a personal interview, I'd like to take you down there at some point and show you how it works.”

Such a visit would provide an opportunity to look at the carrier's elevators, Task & Purpose replied.

“Yup, that's where I was last week,” Spencer said.

With that, the press conference ended.

SEE ALSO: Toxic Chemicals Poisoned The Drinking Water At Military Bases. Now Congress Is Doing Something About It