The Navy’s contaminated drinking water crisis is only getting worse

Water, water everywhere and not a drop to drink. 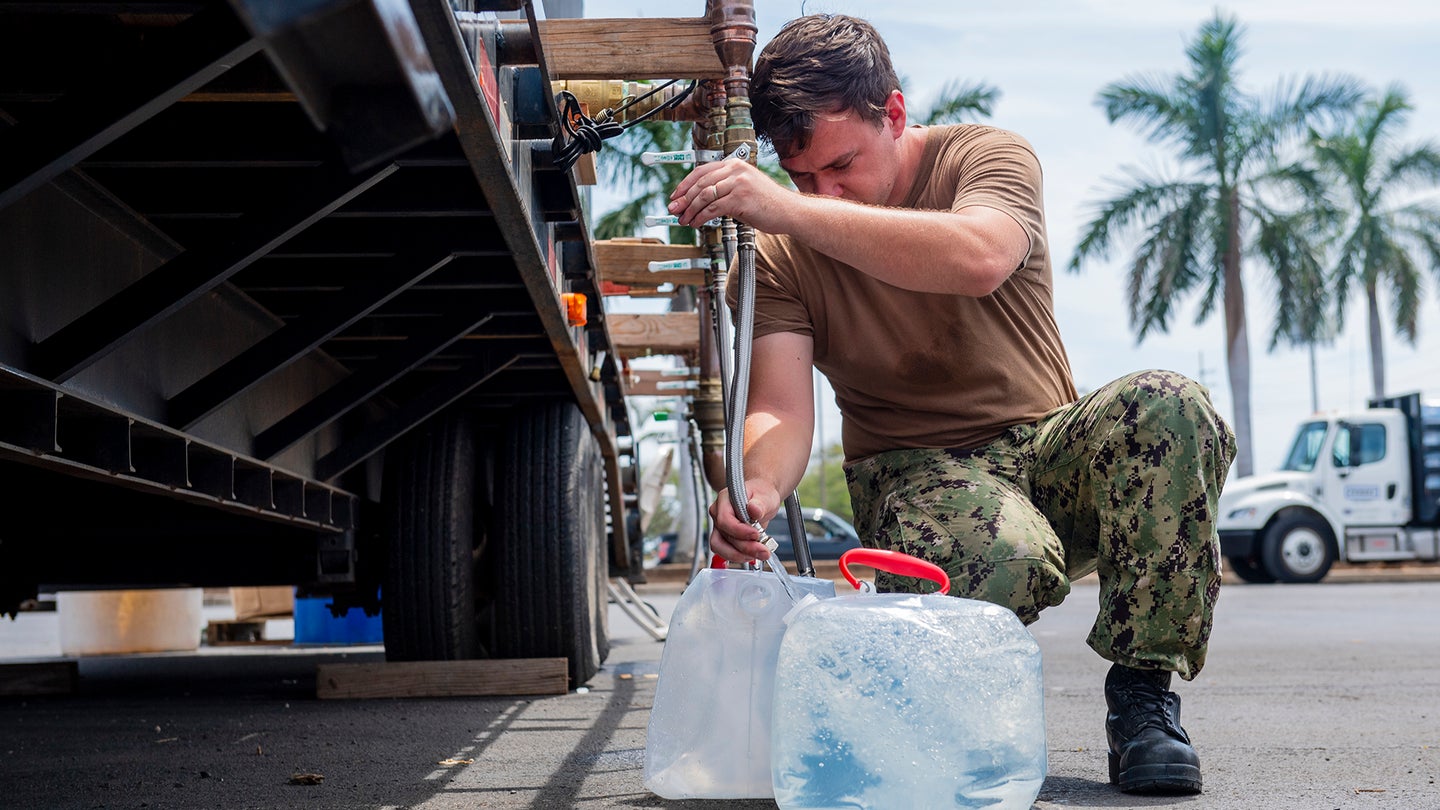 The Navy needs to admit that it is facing growing problems with providing sailors and their families with clean drinking water.

At Joint Base Pearl Harbor-Hickam in Hawaii, where thousands of people were poisoned last year by leaks from the Red Hill Bulk Fuel Storage Facility, recent water main breaks have again left many people on base without drinking water, as first reported on Oct. 17 by Military.com.

Repairs to the base’s water system should be completed between October 23 and 26 — about seven to 10 days after the base’s 36-inch water main broke, according to Charles Anthony, a spokesman for Joint Base Pearl Harbor-Hickam. Anthony also said the most recent problems at the base are not related to the earlier fuel spills.

“The Hawaii Department of Health amended the advisories for all neighborhoods on the water system in March 2022, saying the water is safe,” Anthony told Task & Purpose. “The issue we are working on now is broken water mains, which can introduce potential contamination into the water system.  This is a separate issue. We are committed to the safety of the community — all users of the water system — and are coordinating closely with regulators on all of our efforts.”

It’s becoming difficult for the Navy to claim that drinking water problems such as those at Joint Base Pearl Harbor-Hickam are isolated incidents considering that potable water aboard two aircraft carriers recently became contaminated: E. coli bacteria was found in the USS Abraham Lincoln’s water, and the Navy found jet fuel in the USS Nimitz’ drinking water after initially claiming the water was safe.

Eleven sailors aboard the Nimitz may have been sickened by the jet fuel in their drinking water, a spokesman for 3rd Fleet told USNI News. All those sailors were treated and cleared to return to duty. One sailor aboard the Abraham Lincoln told San Diego’s ABC affiliate station KGTV that she became sick after drinking the ship’s contaminated drinking water.

In a statement to Task & Purpose, Navy Secretary Carlos Del Toro said the service is working to address the continuing problems with drinking water.

“The health and wellbeing of our sailors and their families is my number one priority and the Department of the Navy is committed to ensuring every member of our team has access to clean and safe drinking water,” Del Toro said in the statement. “Our team is laser-focused on fixing the near term challenges while also addressing long term infrastructure issues that in some cases date back 50 years. Experts across the fleet at Navy Region Hawaii, Joint Region Marianas, U.S. Pacific Fleet, and at Naval Air Forces are working around the clock to remedy each unique situation. Make no mistake, this has my full attention and no resource will be spared to get after these issues.”

But the Fleet Reserve Association, an advocacy group for enlisted sailors, Marines, and Coast Guardsmen, believes the Navy needs to do more to protect its people from contaminated water, said John Davis, the association’s director of legislative programs.

Moreover, the association’s National Executive Director Christopher Slawinski believes that ensuring that sailors and their families have clean drinking water is “an issue of paramount importance,” said Davis, who added that Slawinski has been diagnosed with prostate cancer, which may have been caused by his exposure to jet fuel while in the Navy.

While the number of sailors aboard the Abraham Lincoln and Nimitz who became ill from contaminated drinking water may be relatively low, such incidents are poison for any crew’s morale, said Dan Grazier, a Senior Defense Policy Fellow with the Project on Government Oversight, a watchdog group.

“If they can’t trust their commanders to provide something as basic as clean drinking water, that’s really going to make them question their judgment on a lot of other issues,” Grazier told Task & Purpose.

The Navy needs to do more to ensure that all its ships perform necessary maintenance, but that could be difficult for the service given the non-stop operations tempo that requires ships constantly deploy all over the world, he said.

Even though the size of the Navy’s fleet has shrunk by more than half since the 1990s, the service still tries to maintain a constant global presence with a much smaller fleet.

When the Navy had about 600 warships during the Cold War, it tried to keep about 100 vessels deployed at any given time, former Undersecretary of the Navy Robert O. Work wrote in 2021 commentary in the U.S. Naval Institute’s Proceedings magazine. As of Oct. 17, a total of 87 Navy warships were underway, according to USNI News’ Fleet and Marine Tracker.

“There have been a lot of reports over the last couple of years about how over-stressed and overtaxed the Navy is, which has contributed to a whole bunch of problems, Grazier said. “Perhaps if the deployment schedule wasn’t so rigorous, then the Navy would have a better chance of catching these issues before they crop up.”

Contaminated drinking water has been a perennial problem for the Navy. A 2013 Navy Inspector General’s report found that “not a single Navy overseas drinking water system meets U.S. compliance standards”.

Obtained by the Project on Government Oversight, the report noted that a 2005 sanitary survey found severe problems with the drinking water at Mineo Family Housing near Naval Air Station Sigonella, Italy, that should have been fixed before roughly 1,580 residents had moved in.

“The scope and magnitude of the deficiencies were so egregious, the consultant conducting the sanitary survey recommended the Navy declare the water non-potable,” the report found. “There is no evidence that Navy officials approved the water source or even routinely monitored the treatment system to ensure the water complied with applicable standards and was safe to drink.  For at least six years, thousands of Sailors and their dependents residing at Mineo drank, washed and bathed in this water without knowledge of its deficiencies.  As a result, thousands of people remain unaware of their potential exposure to harmful contaminants with the possibility of future adverse health outcomes.”

Back in the United States, the Department of the Navy announced in 2019 that it would not pay any claims to people who were exposed to toxins in the drinking water at Camp Lejeune, North Carolina, between 1953 and 1987. That decision came after a federal court had ruled that the Navy was not responsible for damages because the chemicals found in the water were not regulated until 1989.

Then-Navy Secretary Richard Spencer told reporters at the time that the Navy Department had faced a total in $963 billion in claims from more than 4,400 lawsuits filed by former service members, family members, and employees, who claimed they were harmed by contaminated drinking water at Camp Lejeune.

“The court decision has made it clear there is no legal basis nor ability for the Department of the Navy to pay these claims,” Spencer said at a January 2019 news conference. “Based on these decisions and my assessment of the facts as well as advice and recommendations from both the Department of Justice and the Judge Advocate General of the Navy, I have approved denial of the remaining claims.”

The Navy is not the only military branch struggling to deal with water issues. More than 700 military installations are either known or suspected to have been contaminated by polyfluoroalkyl substances, or PFAS, a toxic substance used in firefighting foams, according to the Environmental Working Group, a nonprofit advocacy group based in Washington, D.C.

Earlier this year, Congress finally approved the PACT Act, which expands healthcare for veterans suffering from lung cancer and other illnesses caused by burn pits and other sources of toxins. Up to 3.5 million veterans may have been exposed to burn pits and other airborne hazards, according to the Iraq and Afghanistan Veterans of America advocacy group.

Kayla Williams, an expert on veterans and military personnel with the Rand Corporation, also noted that water contamination is a problem that is not just limited to the military, as evidenced by the crisis in Flint, Michigan, from 2014 to 2016, when residents were exposed to lead that had leached from the city’s water pipes.

Media reports indicate that other cities in the United States are dealing with similar issues, Williams told Task & Purpose.

“Contaminated drinking water is an issue that the entire United States has to reckon with and be attuned to,” Williams said.

But until the Navy can figure out how to provide its people with clean drinking water, it cannot expect to rule the waves.