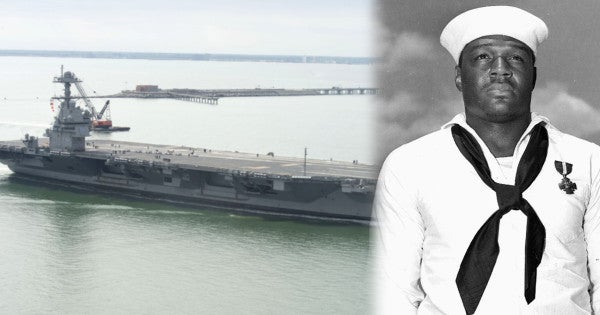 The Navy did not immediately respond to a request for comment from Task & Purpose.

Miller joined the Navy in 1939 and was trained as a mess attendant, one of a handful of jobs open to African-Americans in a then-segregated military. On Dec. 7, 1941, during the attack on Pearl Harbor, Miller helped to move the mortally wounded captain of his ship to safety and then manned an anti-aircraft machine gun and fired at attacking Japanese planes until he ran out of ammunition, according to his citation for the Navy Cross.

“It wasn't hard. I just pulled the trigger and she worked fine,” Miller, who had no training on the gun, later recalled. “I had watched the others with these guns. I guess I fired her for about fifteen minutes. I think I got one of those Jap planes. They were diving pretty close to us.”

Miller was the first African-American sailor to receive the Navy Cross, as Adm. Chester Nimitz, then commander of the Pacific Fleet, noted at the time. Miller later died in Nov. 1943 after his ship was struck by a torpedo fired by a Japanese submarine.

Miller was the namesake of the the USS Miller (FF-1091), a Knox-class frigate commissioned in 1973. The new CVN-81 aircraft carrier named for Miller, scheduled to replace the Carl Vinson, will join the Gerald R. Ford (CVN-78), John F. Kennedy (CVN-79), and the Enterprise (CVN-80).