Donald Stratton, one of the few remaining members of the USS Arizona who survived the Dec. 7, 1941 attack on Pearl Harbor, has died. He was 97 years old. 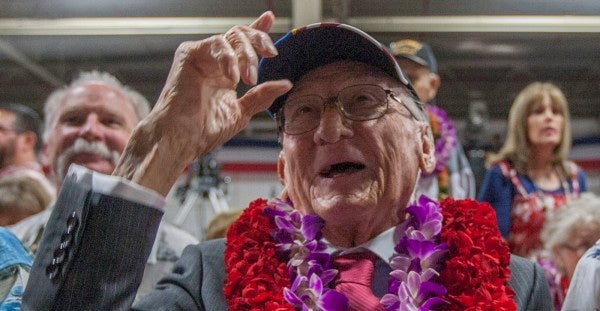 Donald Stratton, one of the few remaining members of the USS Arizona who survived the Dec. 7, 1941 attack on Pearl Harbor, has died. He was 97 years old.

“We are profoundly sad to say that last night, February 15, Donald passed away peacefully in his sleep surrounded by his wife of nearly 70 years, Velma, and his son Randy,” reads a Facebook post on his account. “One of Donald's final wishes was that people remember Pearl Harbor and the men aboard the USS Arizona.”

Stratton grew up in Nebraska and enlisted in the Navy in 1941, and was serving aboard the USS Arizona during the attack on Pearl Harbor. He was with five other sailors in the burning forward mast, and was saved when a sailor from the USS Vestral threw them a line, which he crawled across, hand over hand, sustaining burns to over 70 percent of his body in the process, according to the Pearl Harbor National Memorial.

After surviving the attack, Stratton was medically discharged in September 1942, but he reenlisted in January 1944 and served in the Navy for the remainder of the war being leaving the service as a Gunners Mate Second Class.

On Sunday, the flag over the USS Arizona Memorial was flown at half staff in recognition of Stratton's life and service.

In recognition of Donald Stratton's life and military service, the flag over the USS Arizona Memorial was flown at half staff,(Pearl Harbor National Memorial/Facebook)

The USS Arizona was hit by Japanese bombers during the Dec. 7, 1941 attack, which prompted the United States' entrance into World War II. The attack claimed the lives of 2,341 American service members, including 1,177 crewmen aboard the USS Arizona, according to the National Park Service's website.

According to ABC news, at the time of his passing, Stratton was one of three remaining survivors of the USS Arizona.