The Best List Of The 10 Best Sailors In Navy History

People love lists! Well, web publishers love lists, because you click them and share them, especially if they have funny... 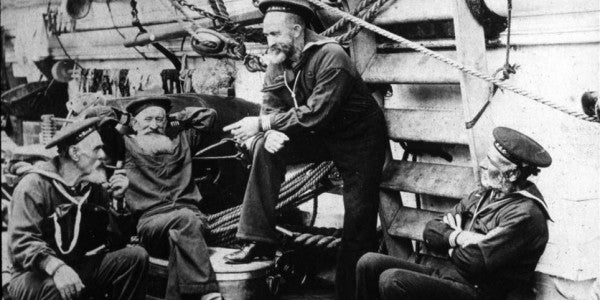 People love lists! Well, web publishers love lists, because you click them and share them, especially if they have funny headlines about ingroups that interest you and your peers. Some blogs make banal, predictably officer- and SEAL-heavy lists of “best sailors ever” for you to click on. Some bigger outlets may run those lists instead of making their own.

It's a slippery slope from PO2 to Purple Heart and a U.S. flag diaper.Larry Flynt Publishing via Vice

Enlisted in the Army 1958 when he was 15, then discharged the following year. So he waited till he was 17 and the Navy took him as a radar operator. After he got out, he opened his first bar, beginning an unconventional but undeniably successful career as a porn king and First Amendment icon. That didn’t leave much time for, like, high school — but Flynt got all the education he needed in the sea service. “If you’re doing something because you want to learn, you’re gonna learn a hundred times more than a kid at school who’s doing it because he has to,” he’s said. “Those four years in the Navy were really great for me for that reason.”

Even if he’d never donned an officer’s cover in McHale’s Navy, actor Ernest Borgnine — you know, that guy from The Dirty Dozen and Spongebob Squarepants — would be salty as fuck. “After graduating high school in 1935, he was selling vegetables off the back of a truck when he saw a U.S. Navy recruiting poster, which led to enlistment,” according to Military.com. He stayed in until October 1941… and then reenlisted after Pearl Harbor, spending the war on a yacht converted into an antisubmarine patrol craft, making gunner’s mate 1st class. And that was all before he became the most famous lieutenant commander in primetime… and that guy in that movie who vaguely reminds you of your favorite grandfather.

The crew of the USS Dallas

Not every petty officer gets this kind of audience.Youtube/screenshot

Look, highlighting individual sailors at all is kinda weird, since the strength of a ship is her crew. And one of our favorite ensembles is the all-American boomer-hunting team aboard this 688-class attack sub from The Hunt For Red October — from cowboy captain Bart Mancuso to the bookish XO, whose name you forgot, to the donut-loving, sea-story dispensing chief of the boat. And, of course, cocky Sonarman Jones, who ends up having a nice post-Navy career in law. Recovering a secretive Soviet missile boat, and using some fancy angles and dangles to kill an Alfa sub with its own torpedo: Get you a fast-attack crew who can do both.

During World War II, loading munitions onto Navy ships at Port Chicago, in the California Bay Area, was hazardous duty — and the service assigned it to “colored” sailors who didn't receive full training on the job's dangers. In July 1944, one bad move at Port Chicago lit up 5,000 tons of explosives on two ships, flattening everything in a two mile radius and killing 320 mostly African American sailors. A month later, the Navy sent 258 surviving black sailors to continue the slipshod ordnance work; they refused. 108 of the men got docked pay and bad conduct discharges; another 50 got court-martials and hard labor, an injustice that stings to this day. But the sailors stuck to their guns, most only getting recognition for their act of civil disobedience decades after the fact.

Next time someone tells you women are bad at math, computers, or the military life, tell them fuck you, because Rear Adm. Grace Hopper, PhD, existed. She also more or less invented computer programming languages and explained the concept of the nanosecond for you dumb rubes before retiring from the Navy just shy of her 80th birthday. Salty af.

You’ve heard of Jack Kerouac and Allen Ginsburg? Probably no one would have heard of those goddamn hippies if not for a decorated naval officer who had enlisted after Pearl Harbor and patrolled for German subs during the Normandy invasion. But Lt. Cmdr. Lawrence Ferlinghetti, USNR (Ret.) used his postwar GI Bill to attend Columbia, added a doctorate in poetry for the Sorbonne, and opened a San Francisco bookstore and press — City Lights — that not only birthed and nourished the Beat literary movement, but still stands today. As does Ferlinghetti himself, now a spry 99. If Beats were Jedi Knights, Ferlinghetti would be their Yoda.

How do you define “overachiever”? Well, say you’re the cantankerous first Jewish commodore in the history of the U.S. Navy; you helped ban flogging as a punishment, for which you were court-martialed; you killed an officer in a duel after he called you a “Jew coward,” and were court martialed for it; and you got four more courts-martial on the way, before President Lincoln appointed you to the Navy court-martial board? Also, say you bought Thomas Jefferson’s ancestral home and patriotically kept it intact for almost a century until the government took it off your family’s hands? I’d say you qualify in my book.

Rudy Boesch, the SEAL from season No. 1 of Survivor

Seriously, how does he even lift his arm with all that gold?

Boesch enlisted at the end of World War II, became a UDT, then became a plankowning SEAL, then became the senior enlisted advisor to SOCOM. By the time he retired in 1990, he was the SEAL teams’ “bull frog,” having served longer on active duty than anyone else in the community — 45 years. Good thing he had that retirement, since he fucked up Survivor at the end of the season.

Thanks for walking point, and also for observing opsec instead of cashing in. Hooyah!

Hungry for more lists and features like this? Tell us what you’d like to see in the comments or email us at tips@taskandpurpose.com.