It was “perhaps the worst national-security breach of its kind to hit the Navy since the end of the Cold... 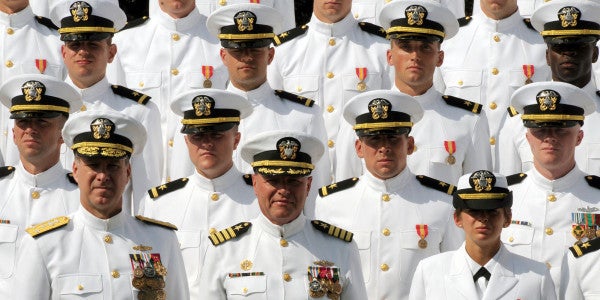 It was “perhaps the worst national-security breach of its kind to hit the Navy since the end of the Cold War, as the Washington Post put it: Leonard Glenn Francis, a 350-pound defense contractor, plied dozens of Navy and Marine personnel with prostitutes and cash to get sensitive info on their ships’ movements — info he used to snag port-service contracts and overbill the service to the tune of at least $35 million.

So far, federal authorities have successfully prosecuted 16 service members and contractors for their roles in the “Fat Leonard” scandal.

The Navy? Not so much.

According to Marine veteran and San Diego Union-Tribune military reporter Carl Prine, the naval service’s ethics watchdog — once led by a lenient admiral who’s now the chief of naval operations — “has only one ongoing court-martial, a pair of lighter nonjudicial punishment decisions and a handful of sternly written rebukes of senior officers to show for more than three years of inquiries” related to the scandal.

Among the officers who have been disciplined by the service, punishments have been surprisingly light — a fact that some critics say highlights the easier treatment commissioned officers get from NJP and courts-martial.

“When we go to boot camp and as we’re coming up in the military, we’re told that officers and chiefs are held to a higher level, a higher standard,” Navy veteran and Truman Foundation representative Shawn VanDiver told Prine. “But time and time again, we see that that’s just not the case.”

That’s not how it was supposed to be. Shortly after the Fat Leonard scandal became public knowledge in 2013, then-Navy Secretary Ray Mabus set up a “consolidated disposition authority” to address related cases not handled by civilian authorities. “The Navy does not convene a team to review cases and dispense justice (and give it a Grim Reaperesque title of “Consolidated Disposition Authority”, no less) unless…the organization expects that team to be relatively busy,” naval analyst Dr. Craig Hooper suggested after the CDA’s creation.

But Prine suggests the CDA hasn’t been that busy. A Union-Tribune analysis of CDA files, obtained through a Freedom of Information Act request, shows that while 200 sailors and DoD personnel were flagged for investigation in connection with the Fat Leonard case, the CDA has disciplined only 25 personnel for wrongdoing in four years with “relatively light” punishments.

Those punishments included letters of reprimand for four admirals; administrative action for six other sailors; and forfeiture of half a month’s pay for one sailor who confessed to slipping Francis the Navy Flag Roster of admirals.

In some cases, sailors who received $750-a-plate dinners and personal gifts from Francis were simply given private talking-tos by Navy higher-ups — including current CDA chief Adm. Philip Davidson and his predecessor, Adm. John Richardson, who is now the CNO. Both in Fat Leonard cases and in unrelated investigations where they had substantiated misconduct, the admirals sought leniency for the offenders for a variety of reasons, Prine’s reporting reveals.

Experts tell Prine there are plenty of reasons for why the Navy’s Fat Leonard investigations haven’t yielded more, and harsher, punishments. According to Navy spokeswoman Capt. Amy Derrick, the service is focused on cases not taken up by prosecutors, meaning there’s usually insufficient evidence or statutory basis for criminal prosecution.

Beyond that, officers can’t suffer a reduction in rank from nonjudicial punishment, and the CDA “lacks legal authority to compel officers and petty officers to reimburse the government for taking prohibited gifts,” Prine reports.

But critics say these are profound problems for a service that can’t expunge its ranks of loose-lipped backbiters and bribe-takers who shared operational details with a defense contractor simply for a little cash or companionship. The Fat Leonard case “highlights a lack of discipline across the board,” as retired Navy lawyer Lawrence Brennan told Prine.

“Tailhook was bad,” Brennan added, referring to the 1991 misconduct scandal that paralyzed the naval aviation community, but “‘Fat Leonard’ is an existential problem for the Navy because it affects the entire institution.”