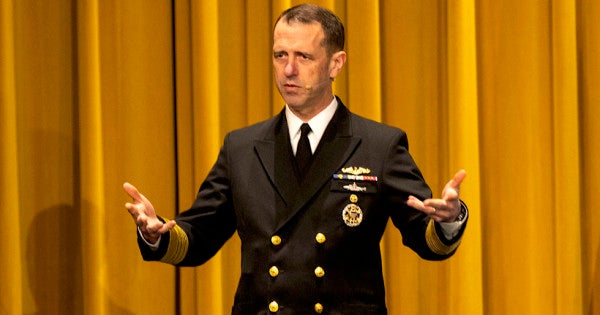 Former Chief of Naval Operations Adm. John Richardson just gave the weakest of weak-ass excuses for the litany of disasters that define his legacy.

“Your character is like a muscle,” Richardson told Washington Post reporter Dan Lamothe in a recent interview. “It sort of gets stronger when you train it, and then it gets fatigued when you strain it and you use it a lot.”

Richardson was speaking about scandals plaguing the Navy SEALs, but considering the other catastrophes during his tenure as CNO, Twitter users seized on Richardson's comment about character fatigue as ironic, incomplete, and totally clueless.

Richardson touched on the issue of character in May when he ordered a review into how the Navy investigates and separates sailors for misconduct after former SEAL Eric Greitens was able to return to the service.

Greitens had resigned as Missouri governor in May 2018 after being accused of sexually assaulting a woman. Prosecutors decided not to charge him for the alleged sexual assault due to a lack of evidence and the statute of limitations.

“Top performance from our sailors can only be achieved through a deliberate enduring commitment to professional expertise and commitment to being a person of high moral character consistent with our core values of honor, courage, and commitment,” Richardson wrote in a May 30 memo. “This is a high but necessary ethical standard and sets an expectation for personal behavior that far exceeds mere criminal standards.”

But character was not the Navy's Achilles heel under Richardson. Competence was. Two separate ship collisions in 2017 involving the destroyers USS John S. McCain and USS Fitzgerald revealed that sailors in the surface fleet were woefully undertrained and overworked.

The Navy's attempt to prosecute Cmdr. Bryce Benson, the former captain of the Fitzgerald, collapsed in part because Richardson kept blaming Benson for the disaster, running afoul of unlawful command influence.

And the prosecution of Navy Special Warfare Operator 1st Class Eddie Gallagher failed so spectacularly that Richardson ordered a review into the Navy's Judge Advocate General Corps on Aug. 1.

Yet, others were always at fault during the Richardson years. Scandals that would have felled other CNOs left Richardson unscathed while subordinates saw their careers ruined.

As historians will debate how much Richardson is at fault for all that went wrong while he served as CNO, one question will be whether he had the right character for the job to begin with.