The recruiting commercials for the Army Reserve proclaim "one weekend each month," but the real-life Army Reserve might as well say "hold my beer." 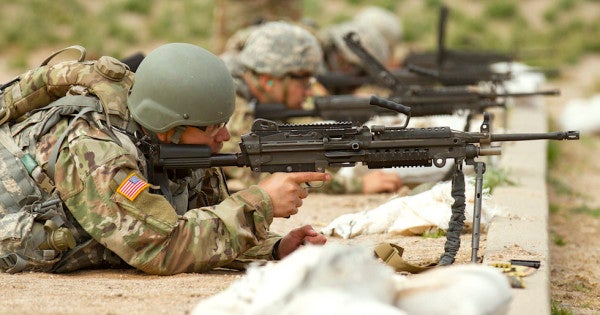 The recruiting commercials for the Army Reserve proclaim “one weekend each month,” but the real-life Army Reserve might as well say “hold my beer.”

That's because the weekend “recruiting hook” — as it's called in a leaked document compiled by Army personnel for the new chief of staff— reveal that it's, well, kinda bullshit.

When they're not activated or deployed, most reservists and guardsmen spend one weekend a month on duty and two weeks a year training, according to the Army recruiting website. But that claim doesn't seem to square with reality.

“The Army Reserve is cashing in on uncompensated sacrifices of its Soldiers on a scale that must be in the tens of millions of dollars, and that is a violation of trust, stewardship, and the Army Values,” one Army Reserve lieutenant colonel, who also complained that his battalion commander “demanded” that he be available at all times, told members of an Army Transition Team earlier this year.

In addition, the colonel added, the Army Reserve had sucked up so much of his time that he was “struggling to keep my marriage and family together.”

The quote was among several compiled by an Army-wide team tasked with compiling data and answering questions for new Army Chief of Staff Gen. James McConville. They also offered up plenty of gripes among the rank-and-file, to include their near-universal hatred of the service's “Sustainable Readiness Model” of getting soldiers ready for combat — which, according to soldiers, quite often has reservists working overtime for no pay.

“Not only are Soldiers presenting themselves in uniform more often, but more importantly, there is a greater expectation that Soldiers, on non-pay status, complete military work in order for the unit to maintain their readiness,” said one staff sergeant in the Army National Guard.

Under the theme “Readiness demands are breaking the force” in the 142-page document, which was obtained by Task & Purpose earlier this week, the report's authors note a sentiment among soldiers that SRM is “neither sustainable nor effective,” since they are under constant stress to meet quotas for mandatory training programs — while other things like housing, job satisfaction, and healthcare tend to go out the window.

“The Reserve Component feels this strain too,” the authors write, “which manifests in additional time necessary to meet requirements outside of the espoused one weekend a month, two weeks a summer recruiting hook.”

For example, according to one Army major with 12 years in the reserves: “I'm taking vacation days from my civilian job to keep up with metrics and mission. Give me more time and money for the job I'm doing. The only reason I am staying is to get the 20 year pension.”

“We tell our Soldiers, if you're at an interview don't tell people that you're a reserve component Soldier,” said another Army Reserve captain. “When I was a Reserve Company Commander I worked 20 hours a week for the Army for free. Right now I lose 2-3 months a year for reserve component commitments.”

Though the personal feedback from soldiers was limited, it was “honest and emblematic of the force as a whole,” wrote Lt. Gen. Eric Wesley, Army Transition Team director, in the report's executive summary.

“The Army Reserve has this fundamental imperative to be ready enough for the next fight,” Chief of Army Reserve, Lt. Gen. Charles Luckey, told reporters earlier this year. “But not so ready that we can't keep meaningful civilian jobs, and a healthy family lifestyle. We have soldiers out there every day that are committed to something larger than themselves: selfless-service support in defense of the United States of America. It is a national imperative to continue to share this talent, and encourage and incentivize our soldiers to continue to serve.”