The Army, Navy, and Air Force are banning all vaping products from the exchange

So far, only the Marines have yet to make a decision on whether or not they'll ban the sale of e-crayons, err, we mean e-cigarettes and vaping accessories on base. 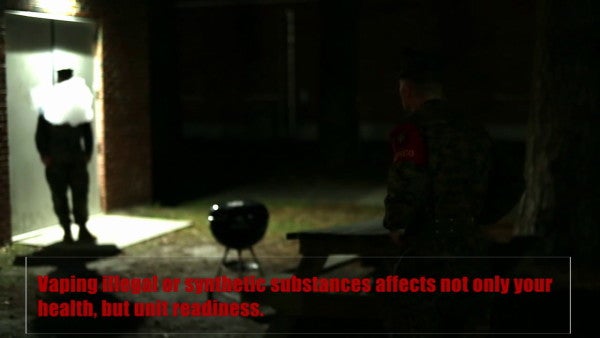 If you're a soldier, sailor or airman who enjoys taking way-too-long drags of your JUUL while on duty, then you may want to vape 'em while you've got 'em, because at the end of the month the Army, Air Force and Navy will be putting the kibosh on e-cigarette sales at base exchanges.

So far, only the Marines have yet to make a decision on whether or not they'll ban the sale of e-crayons, err, we mean e-cigarettes and vaping accessories on base.

As for whether or not the Corps will remain the military's lone purveyor of cotton candy vape juice: “No decision has been made yet,” Bryan Driver, a spokesman for Marine Corps Community Services told Task & Purpose.

The Coast Guard did not immediately respond to request for comment.

The decision for the other military branches to stop selling e-cigs at their base exchanges comes amid concerns about links between vaping and lung disease.

“Until the U.S. Food and Drug Administration's work with the Centers for Disease Control and Prevention and state health departments to collect information on e-cigarette and vape products is complete, the Army & Air Force Exchange Service is removing these products from its assortment, effective close of business Sept. 30,” Chris Ward, a spokesman for AAFES, told Task & Purpose.

For the Army and Air Force Exchange Services, the temporary ban on e-cigs is unlikely to have that much of an affect on their bottom line.

“The category is a very small portion of the overall tobacco category accounting for about ½ of 1 percent of the total sales of all tobacco at exchanges last year,” Ward told Task & Purpose. In 2018, e-cigarette products accounted for $1.8 million in sales at Air Force and Army exchanges, down from 11% the year prior.

In a Sept. 23 statement, the Army Public Health Center warned troops and their families to steer clear of vape products, saying that “hundreds of cases of severe lung illness associated with e-cigarette products have been reported across multiple states. Numerous people have died from the illness.”

The Navy for its part already removed vaping products from a majority of its locations earlier this month, and plans to put a stop to the sale of those dastardly smoke delivery systems at its remaining vendors.

Which just leaves the few, the proud, the Marines still in the fight for troops' rights to purchase e-cigs on base, where they can also buy chewing tobacco, actual cigarettes, and booze, before, or ideally after a day out on the range tossing hand grenades or shredding targets with 5.56 and 7.62 mm rounds – you know, safe wholesome stuff with no adverse side affects.