The Air Force Is Down With The Army’s OCP. The Other Branches, Not So Much

The Air Force has officially adopted the Army’s camouflage pattern, but don’t expect the rest of the services to follow... 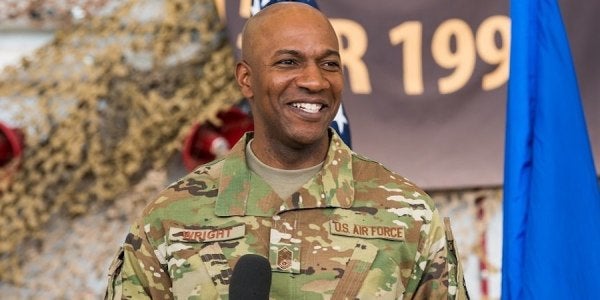 The Air Force has officially adopted the Army’s camouflage pattern, but don’t expect the rest of the services to follow suit — that’s just crazy talk. Both the Marines and the Navy plan to continue to wear their distinct camo patterns, service officials told Task & Purpose.

Over the next 30 months, the Air Force will phase out its tiger-striped Airman Battle Uniform and sage green boots in favor of the Operational Camouflage Pattern (OCP) uniform and coyote brown boots for airmen, Air Force Maj. Gen. Robert Labrutta, director of military force management policy, told reporters on Monday

The OCP uniform will also include tan undershirts and tan socks for airmen. Airmen who go outside the wire will receive the fire retardant version of the OCP.

The timeline will allow industry to ramp up production of the OCP uniforms, Labrutta said. “It’s going to take some time for us to be able to field this across the United States Air Force, and that’s the reason for the 30 months.”

It will cost about $237 million over the next three years to switch to the OCP uniforms, LaBrutta said, who added that the service expects to break even on uniform costs because airmen deploying downrange will no longer be required to have both the ABU and OCP.

“There are upfront investment costs any time you transition into something like this, but in the long term it will be a break even for the United States Air Force,” LaBrutta said. “The benefit that we’re going to get out of this in readiness, joint integration, and of course the airmen demand signal, are the reasons why we’re doing this – and very worthwhile.”

The only major differences between the Army and Air Force’s version of the OCP is that the latter will use spice brown for all patches and rank insignias with the exception of the first lieutenant and lieutenant colonel rank insignias, which will be black.

The Air Force’s move puts the U.S. military closer to the pre-Iraq War days when all troops rocked the same woodland green and desert uniforms regardless of branch. Then the Marine Corps introduced its own camouflage pattern in 2002, starting a cold war between the services to develop their own distinct camouflage uniforms.

From this conflict sprang the Army Combat Uniform, which worked in neither woodland nor desert climes, and the Navy’s Type I working uniform, dubbed “aquaflage” because it allowed sailors who fell overboard to blend in perfectly with the water.

But lawmakers were so outraged that in 2014 they explicitly prohibited the services from spending any more money on service-specific uniforms until they developed a common camouflage pattern. Both the Army’s OCP and the Navy’s newest camouflage patterns had been designed before then, so they are exempt from Congress’ edict, officials said.

The Marine Corps and Navy intend to stick with their camouflage uniforms rather than adopting the Army’s camouflage pattern, like the Air Force, officials told Task & Purpose.

While the Fiscal 2014 National Defense Authorization Act allows one service to wear another’s uniforms for special mission requirements without having to switch over to another uniform, Moore said.

“The Marine Corps utility uniform has undergone several positive, iterative changes over the past 17 years and we have a uniform designed, produced, and distributed to match our mission and combat requirements,” said Corps spokesman Maj. Brian Block. “Our uniform, and the MARPAT camouflage pattern, has proven itself in combat. The Marine Corps views our unique uniforms as a key attribute distinguishing Marine units from our joint and international partners. The distinctive appearance of our Marines is a tactical advantage and a source of esprit de corps.”

As for the Air Force, airmen will be able to start wearing the OCP uniform in lieu of the ABU on Oct. 1, when enlisted airmen will begin to receive an extra $20 for their clothing allowance. The purpose for the delay, LaBrutta said, is for the service develop guidance showing how to properly wear the uniform, which will include pressing issues such as how airmen should wear their headgear and heraldry patches and when they can roll up their sleeves.

More AAFES stores will begin selling the uniform in April 2019, and then the Air Force will start fielding the uniform at basic military training and officer training programs in October 2019, LaBrutta said. All airmen will be required to wear the coyote brown boots starting in June 2020, he said.

The OCP uniform will be mandatory beginning in April 2021, when the ABU will no longer be in the Air Force’s inventory.