We Veterans Get Upset About The Dumbest Crap

It's another week, and yet another overblown scandal led by the internet veteran outrage police. This time it's over a... 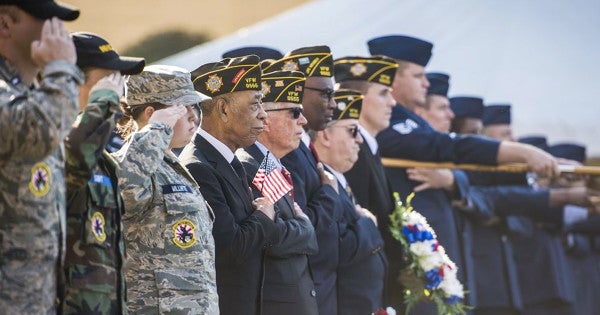 It's another week, and yet another overblown scandal led by the internet veteran outrage police.

This time it's over a dumb reenlistment video starring an Air Force National Guard master sergeant and her dinosaur hand puppet. After the video was posted by a popular Air Force Facebook page and subsequently went viral, the National Guard commander went ballistic and fired the colonel who conducted the reenlistment, reassigned the master sergeant, and even fired the goddamn camera man.

To be clear, I'm not excusing the behavior depicted in the video. Was it unprofessional to recite the oath using a dinosaur hand puppet? Yes, it was. It also turns out that the video was made for the woman's kids. Does that make it any better?

But how about the fact that, in just about every case of a reenlistment ceremony I've ever heard of, the person reenlisting gets to choose how they want to do it? That often leads to people reciting their oath in stormtrooper costumes, at weird locations, or with guns to their head. Sometimes they even happen underwater. If there's anything that qualifies as mocking what the Air National Guard commander called “such a cherished and honorable occasion,” it's probably a shirtless sailor reciting the oath while wearing board shorts and scuba gear.

Does that change your opinion of dino-puppet-gate? I think it should.

If not, I'm guessing you must have been the epitome of faithful service while you were in, where you never even thought of dodging evening colors. You certainly never drank underage, berated one of the new guys to your unit, or ever insulted one of the officers appointed over you to one of your buddies in formation.

The truth of the matter is that we in the veteran community often get outraged over the absolute dumbest shit in the world, and this is just one of many examples. Veterans have gotten angry over college students attempting to wear camouflage, high schools not allowing recent basic training graduates to wear military uniforms in lieu of a cap and gown, or a small community trying to get a Navy officer to stop or at least turn down the volume when he blasts Taps over loudspeakers every night at 8 p.m.

Are these really the things we should be upset about? Are these the issues that matter most within the veteran community?

They are most certainly not.

Meanwhile, there are veterans struggling with homelessness or stuck in a backlog trying to get benefits through the VA, or continuing to kill themselves at an alarming rate. Sexual assault cases in the military went up 72% between 2012 and 2016. Our politicians are still waging a seemingly endless war, and most recently, expanded the mission in Afghanistan of supporting an inept military and corrupt government that hasn't changed in over a decade.

Aren't you outraged over that?

Why aren't you angry enough to leave nasty comments on the story of how Defense Secretary Jim Mattis tried to get Congress to at least do some level of oversight and be involved in the decision-making process before striking Syria? Why aren't you posting in your private Facebook groups and your hundreds of thousands-strong Facebook pages about the more than 47 service members dying over the past year in aviation mishaps?

Maybe it's because these things aren't meme-worthy, nor do they get the immediate incitement and engagement that words like “women in the infantry” or “transgender” ignite.

But they are the issues we should care about, and they are the issues that we can change through our tremendous power. Yeah, that's right. The veterans community is really powerful. In the past, it organized massive protests to get its earned benefits and to bring about the end of an un-winnable war.

Now it gets people fired over stupid videos.

“This is the kind of bullshit that makes people not want to serve,” Nick Palmisciano, a former Army officer who now runs Ranger Up, said in a recent video (I don't recommend reading the comments). “We've all done stupid things. If you put a bunch of veterans together, what are the stories about? We're telling stories about the dumb things we did that should have got us in trouble or maybe did get us in trouble, and how fun it was as a community.”

The veteran community is squandering the power it once held firm. We keep getting up in arms over what are often minor issues, which then get blown way out of proportion through social media. If our community used just an inkling of its power, perhaps our leaders would be challenged to actually explain to the American people how we're supposed to win in Afghanistan, among other worthwhile initiatives.

But by all means, keep getting pissed off about a female soldier's hair coming down below her shoulders, or a homeowner's association maintaining common standards for how residents can decorate the front of their condo.

I'll be among the rational veterans in the space, getting worked up about things that actually fucking matter.

I hope you can join me.