Marine Captain: Actually Talk To The People Getting Out And They May Change Their Mind

A former Marine captain has written about a common behavior among senior leaders that often leads to a bad taste... 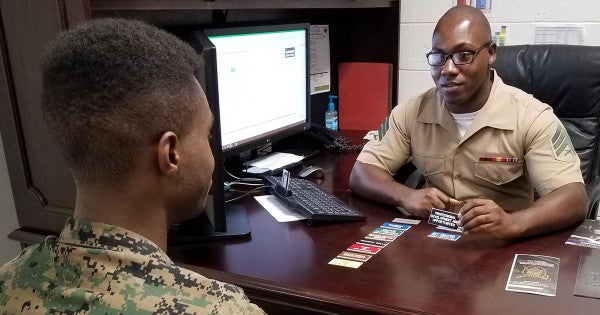 A former Marine captain has written about a common behavior among senior leaders that often leads to a bad taste in the mouth of those who leave the Corps: Being treated like a leper before the end of enlistment.

In an article published in the September issue of the Marine Corps Gazette, Capt. Yosef E. Adiputra (who transitioned out of the Corps before publication) talks about being one of the “EAS Marines” — those coming up on their end of active service date — and how leadership treats them differently if they decide to try something else after their enlistment.

“After three and a half years of honorable service (for the majority of enlisted Marines), a Marine will have endured the rigors of field exercises, shop inspections, field days, working parties, and deployments,” he writes. “After this time, the fork in the road begins to present itself: either EAS from the current contract and use the GI Bill to pursue post-military goals, or remain with the Corps for an additional four years.”

He adds: “But a strange yet common phenomenon begins to occur after that Marine makes his decision to depart. Those leaders who developed and mentored that EAS Marine will slowly begin to drift away from him. This sentiment can often turn into scorn and disdain, as leadership associates that Marine with such characteristics as laziness, selfishness, and detachment because of his decision to leave.”

The feeling of distance and, in some cases, outright hostility from leaders is sadly common. As Adiputra and others can attest, the Corps has a tendency of taking its EAS Marines and putting them on the sidelines somewhere, left to do working parties, stand a bunch of duty, and do other menial tasks before they leave. For a Marine who has decided the Corps may not be all it's cracked up to be — their leadership's actions in response to the question of “are you getting out?” can further reinforce a notion they aren't really valued.

As the captain writes, leaders may respond by saying transitioning Marines are often afforded transition readiness seminars and time for job interviews but in reality, “stories of Marines attending these seminars the month before EAS or participating in month-long field exercises in their transition season are all too common.”

Now consider a different approach, which Adiputra tried with one of his junior Marines. As he writes in his essay, a young corporal came and told him privately that he was getting out. Instead of blowing him off or half-heartedly asking him what his plan was, Adiputra spent time with him working on his resume, talking through his career goals, and developing a budget.

“This simple act of compassion radiated across the platoon, and Marines began seeing themselves as valuable assets of the unit instead of contracted government workers,” he writes. “This shift in perception of the Marine Corps leadership convinced not only that corporal but also nearly 40 percent of my deployment platoon to reenlist.”

Yes, that's right. The corporal who was about to eat the apple and say “fuck the Corps” decided instead that, hey, my officers actually care about me. I'm going to stay in.

“The underground will constantly talk and create the culture,” Adiputra said in a phone interview. “A small thing like that makes a huge difference.”

The idea of continuing to mentor and lead Marines before they leave the Corps could be a better approach, especially considering the increasing numbers of Marines expressing a desire to EAS, according to a 2016 enlisted retention survey. And if nothing else, an extra 10 minutes with a Marine getting out may make the difference between a happy and healthy veteran and one standing in the unemployment line.