Back in the hazy Vietnam War days of 1968, Marine Sgt. Chuck Taliano was only a month away from snagging... 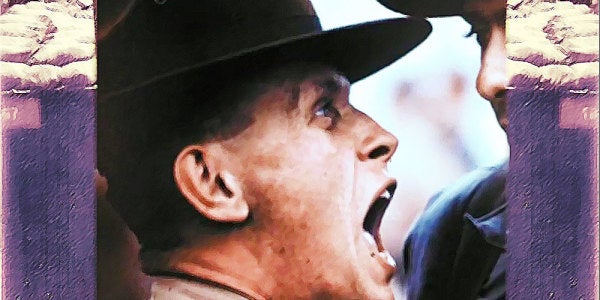 Back in the hazy Vietnam War days of 1968, Marine Sgt. Chuck Taliano was only a month away from snagging his DD-214, capping off his five-year enlistment. Three of his five years were spent as a Drill Instructor at Parris Island, a piece of real estate referred to as a ‘blot on creation’ by the Marine Corps Association.

Taliano was helping provide an ‘attitude readjustment’ to an incoming platoon of new recruits, as is the tradition among the roving cadre of campaign hat enthusiasts. A photographer captured the iconic moment, and unbeknownst to Taliano, a new Marine Corps recruiting push was born.

From this series of photographs, one went on to anchor an iconic recruiting poster, while the others in the series were used as the intro to a recruiting video that took the slogan “We don't promise you a rose garden.”

Hitting television screens in the early 1970s, the new recruiting commercial was a call to wannabe Marines that they should stop being hippies and get a haircut — at Parris Island.

“If you just want to be one of the boys stick with the boys,” a voiceover said. “The Marines are looking for a few good men.”

Chuck with a copy of the recruiting poster bearing his image. Cpl. Jennifer Brofer

The ‘Rose Garden’ recruiting push ran from 1971-1984, and in 1971 Taliano discovered he was the face of it by complete accident.

According to an interview with the Marine Corps, his father called him to let him know his face was in the pages of Newsweek. Taliano went on to work in the publishing industry, and worked at the Parris Island museum gift shop until his death in 2010.

He left behind the standard of what to expect when recruits step on the yellow footprints at Marine Corps Recruit Depot Parris Island, a land that is certainly ‘No Rose Garden’.