“We will give every effort to train you, even after some of you have given up on yourselves.” If this... 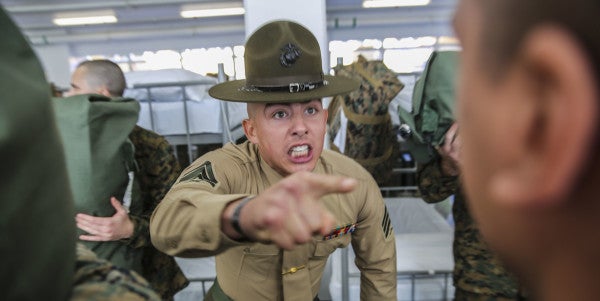 “We will give every effort to train you, even after some of you have given up on yourselves.”

If this sounds familiar, then you might be a Marine.

The line is from the senior drill instructor’s speech that is given during pick-up: The day that recruits meet the drill instructors who will transform them from “nasty” civilians into United States Marines.

At Marine Corps Recruit Depot, Parris Island in South Carolina, recruits go through pick-up on Saturday. At Recruit Depot San Diego in California, recruits are transferred over to their drill instructors on Friday, colloquially referred to as “Black Friday.”

Like everything else in boot camp, the speech is done by the numbers. After the recruits go through receiving, a multi-day in-processing period, they are delivered to their drill instructors.

“These recruits are entrusted to my care. I will train them to the best of my ability. I will develop them into smartly disciplined, physically fit, basically trained Marines. I will demand of them and demonstrate by my own example the highest standards of personal conduct, morality, and professional skill.”

At the end of the speech, May hands the platoon over to its waiting drill instructors before the video fades to black. What follows offscreen is sure to be a whirlwind of screaming, knife hands, cries of “yes, sir,” “no sir,” and “aye-aye sir,” and a few freshly shed tears.