Because Of The Military, I’m No Longer A Self-Conscious Pooper

Have you ever taken a poop while other people watched? If you haven’t… could you? If you’ve served in the... 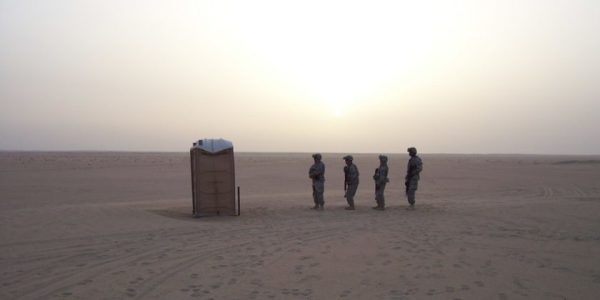 Have you ever taken a poop while other people watched?

If you haven’t… could you?

If you’ve served in the military, you understand this existential problem well.

Generally speaking, we poop in privacy. We also do our daily hygiene and face-pruning without an audience — except for that one dude in ninth grade phys ed class who always took a shower in the locker room before next period. For most of us growing up, our bodily functions were carried out behind closed doors.

You take your dumps in front of an audience.

For some, the experience can be overwhelming, perhaps even horrifying. But those who successfully move their bowels in front of battle buddies will be prepared for life downrange — where the enemy isn't going to give you a porta-john to answer nature's call, according to every gunnery sergeant ever.

This is the story of how I crossed the threshold from self-conscious pooper to a man who could shit like a Marine.

If you think “self-conscious pooper” isn’t a thing, let me set your shit straight. A greatmany people seem to suffer from deep embarrassment when dropping a deuce in a public restroom. (It’s a weird example of a first-world problem, sure, but hey, we’re talking about pre-military me here.)

If self-conscious pooping was an actual, recognized disorder, these would be some of the symptoms:

I’m not sure exactly when that self-consciousness set in for me, but it all evaporated once I arrived at Recruit Depot San Diego in 2008.

Marine recruit training was defined by three things: Instant obedience to orders, speed, and yelling — yours, and theirs. Mostly theirs. The drill instructors yell to wake you up, then yell to get you dressed, then yell to get you and 60 to 80 of your new buddies through your revolutions in the head.

A couple of precious minutes, that’s what you and these five or six dozen other guys get to shave, brush your teeth, and excrete all your excretions. So that every time you sit down on the toilet for your morning glory, there’s a dozen guys anxiously waiting just outside the stall — the one without a door — to use the john before the yelling starts again.

It’s not the kind of environment that accommodates self-consciousness and embarrassment well. Everything is a mission. There’s always a timetable. Even when pooping. If you know fast pooping is not a strength of yours, you try to speed up the shaving and the brushing to buy some time. But you still need that crap to be a speedy one. You can’t hold things up — and you can’t, for the love of God, be the last guy the DIs see coming out of the head.

By the time I graduated recruit training, I could probably poop on command. You could scream at me to take a dump and start a countdown, and before you finished I’d likely respond with a wipe, a flush, and a “DONE, SIR, DONE.” (This was never put to the test.)

Boot camp, it turned out, was only a crash course in public crapping; now came the advanced courses and follow-on training. Barracks life as an enlisted Marine is defined by its 24/7 open door policy. There’s no semblance of privacy. NCOs drop in unannounced, like roid-raged Jehovah's Witnesses, for random inspections. And once you hit the fleet, nothing’s private. If you're lucky, you share a room and one toilet with just one or two other Marines, if you're not, then you share an adjoining bathroom with twice that number. There’s always someone outside the crapper door yelling at you to “hurry the fuck up so I can shit and get to formation 15 minutes prior to being 15 minutes prior.”

Then there’s deployments to exotic locales. For me this meant Helmand province, Afghanistan’s Marjah and Kajaki districts, where flushing toilets and individual stalls were the stuff of dreams. A grown man could cry tears of joy just discovering an empty ammo can or a crate he could set underneath his wag bag. And a wooden outhouse erected by combat engineers would make any weary Marine or sailor feel like a king atop an ivory throne.

But when such amenities weren’t available, you had to make do.

In 2011, I was attached to an infantry battalion in Afghanistan. We were early into a multi-day movement through the township of Kajaki Sofla when I made the mistake of eating some questionable chicken.

On the second day of our mission, I ran through my allotment of wagbags.

On the third day, I was out of empty MRE bags.

On the fourth, I grew steadily more competent at rapidly dropping my trousers, squatting, and doing my business on the side of whatever road, goat path, or wadi I was near.

I never stopped to feel embarrassed — just concerned that I might get shot while my pants were around my ankles. So I’d ask a nearby Marine to keep his eyes out while I popped a squat, and I would take the security watch when it was his turn to clear out some inventory. Taking a tactical deuce like this can often be a point of pride, or a much-needed source of humor downrange.

By the time the food poisoning passed, I probably had the process down to a few minutes from start to finish. And that was it: I was a poop jedi.

It’s been nearly a decade now since I enlisted, and six years since I left the Corps — along with many of the good habits it tried to instill. But there’s one lesson that stays with me: Thanks to the Marines, I no longer shit in a public toilet with any embarrassment.

Now, in those moments, I can almost feel like that youthful Marine on the side of a goat path in Kajaki again, freed by his discovery that poop is a lot like shame: Sometimes, you just gotta let it go.