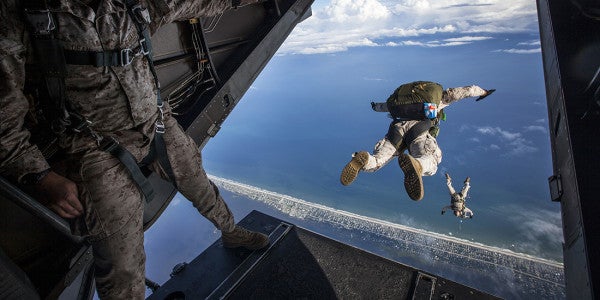 Marines get this more than anyone: You’re never an “ex-Marine,” you’re a “Marine veteran.” But even as a Marine vet, I still wanted — no, needed — to keep the word “pilot” as part of my personal self-image.

So when I was looking for jobs during my last few months in the military, I focused exclusively on flying gigs. I could have expanded my search towards some of my other interests… like writing… but I saw myself first and foremost as a reasonably talented meat servo who could make a rotorcraft dance like a butterfly, and occasionally sting like a bee.

I combed the pilot job advertisements and job boards, and I eventually found a gig flying helicopters for a police aviation unit. As a helicopter pilot, it was pure awesomeness. I flew nearly 80 hours a month instead of the 15-20 I was getting in the Marines. A chase — car, foot, or dirt bike — would pop up every few days. I finally got to ditch the fitreps, the safety stand-downs, and definitely the PFT that occupied my time in the Corps.

I got to fly my aircraft like I stole it — definitely not as fast as in my Osprey, but playing “Star Wars canyon” amid skyscrapers in the Inner Harbor was still money.

I still wasn’t happy, though. Part of it was working a lot of night shifts and holidays. More than that, it turned out that flying wasn’t the only good thing about being an aviator in the Marine Corps.

The most enjoyable part of flying in the Marines wasn’t flying low and fast, but knowing that there was always another qualification to work towards or another planning problem to solve. That’s not something that exists in civilian aviation — at least, not to the same degree.

Even though I was miserable, I didn’t know what I was going to do. I thought maybe I’d be happier if I stuck it out. If only I was a little more senior and able to pick my days off, maybe it would be okay. If I could plug on for a decade longer, eventually I’d have my shit in one bag.

But I happened to grab dinner with a friend of mine from the service. He knew a mutual acquaintance of ours, now with an aerospace firm, and that friend’s company needed somebody who could talk about the Osprey in front of Marine audiences.

Initially, I wasn’t that sure about it. But then I talked with other folks at the company. I went through the interview process. After all of that, I finally got where I could have gotten almost two years earlier. I made the leap from public to private sector — and, more importantly, the leap from professional pilot to just a professional.

Think outside the (fitrep) box

I can’t say I don’t miss the flying, but I’m glad that my time in the Marine Corps prepared me to do more than just my literal military occupational specialty… much more.

Maybe to some, that’s an obvious thing, but after a couple decades in the military bubble, it was a big revelation to me. I’m a fairly experienced guy with a couple of degrees. I might be a little slow on the uptake, but I think there are probably some other veterans who are in the same boat.

You’re not (just) a logistics clerk: You’re directing the deployment of $10 million in assets and 200 personnel to a critical operational assignment on schedule.

You’re not (just) a pilot: You’re directing the deployment of six aircraft–$420 million in assets and 24 personnel over 2,000 miles while adhering to FAA and ICAO regulations.

I’m not an advocate for inflating one’s achievements, but too many vets have done amazing things for so long that they’ve come to feel normal, mundane, when they’re anything but.

You know more than you think you know

You get up every morning for 20 years and put on a certain outfit to do a certain thing. It just makes sense that you try to find a place in the civilian world to do the closest possible thing to that.

News flash: There’s nowhere in the civilian world that lets you do what you did in the military. You can chase that feeling in any number of ways, but eventually you have to find meaning in life apart from risking your safety. The sooner you realize it, the better off you’ll be.

That re-envisioning took me a while. It cost me a lot, from a professional standpoint; I took a lot less pay for two years and lost potential advancement, just to stay close to my military specialty.

But more importantly, delaying my true transition from the military also cost me from a personal standpoint, as a divorced dad. If I’d seen myself as being able to pilot a desk, rather than just an aircraft, the scope of jobs available to me would have been much greater. I could have found one that afforded a better work-life balance, but I started out in civilian life welded to my self-image as Action Jackson. I never consciously articulated it, but I thought those guys putting on the polos with contractor logos on them after they retired were selling out. Yes, that was a selfish call, but I had talked myself into believing I was only suited for one thing. I wasted two years of my life, and time with my kids, figuring out a better, healthier path.

You joined the military, and they indoctrinated you. That was the right thing for you at the time. You got through what you were supposed to get through. But you have so much more than that to offer the world.

So don’t sit around feeling sorry for yourself! Just because the military prepared you to do a job, doesn’t mean it’s the only job.