Shipboard Service Is Harsh. The Navy Isn’t Preparing Recruits For This Reality

“It’s a floating prison.” This is how a sailor described serving aboard USS Shiloh, and the sentiment seemed to be... 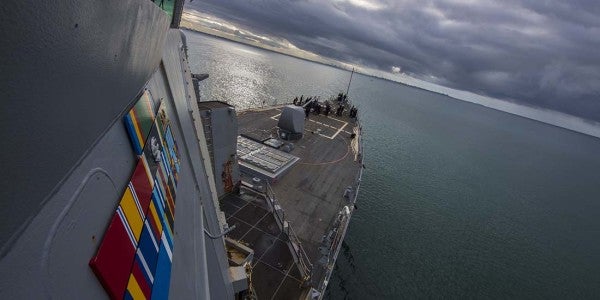 “It’s a floating prison.” This is how a sailor described serving aboard USS Shiloh, and the sentiment seemed to be shared by many of the crewmembers. The Shiloh made headlines when a crewmember Petty Officer 3rd Class Peter Mims went missing while underway, spurring a massive search by the crew for a comrade who, it turns out, who was hiding in an engineering space the whole time.

This seemingly came as a surprise to no one in the crew, as Mims was a strange guy. What struck a chord with me was the fact that so many people in the media were shocked by the story. The truth is every ship has several Mims-like characters on board. The whole Shiloh affair led me to believe that the higher-ups have no idea who is actually serving aboard their ships.

From my time onboard the USS Vella Gulf (CG-72), spanning 2010 to 2013, we lost more sailors to nerves, pressure, and ineptitude than I can actually count. We called the ship “Cell Block 72,” and it sure felt like a floating prison. That’s exactly how I describe serving in the Navy to my friends who’ve asked me about it.

We had Mims beat by a long shot, as eccentricities go. We had an IT who was so inept he was not allowed to use the phone, per the captain’s orders. We had another sailor who would speak to himself aloud in Portuguese — not even remotely his native tongue — and, with a wide-eyed gaze, shout Bible verses in berthing to make us aware of our impending damnation for watching R-rated movies. He was also not allowed to touch or operate anything other than a swab, and eventually parted ways with the crew after almost losing his hand trying to catch the ship’s jack-staff, after he’s removed its securing pin while it was in an upright position.

We had another sailor, a young LSSN, go missing one night… and after a lengthy man-overboard drill, he was discovered in a comatose state, hidden away in a supply locker, high from huffing paint.

These sailors were such commonplace for us — and everyone else that I knew serving on smallboys in Norfolk — that we mostly ignored the obvious facts: They not only shouldn’t have been in the Navy, they needed help.

The truth is, the Navy does not prepare sailors for what life is actually going to be like on a ship. I’m not even sure if it can. The long hours, the endless drilling, the ship in constant disarray — nothing can really prep someone for operating at a non-stop pace for literally years without adequate sleep.

Unfortunately, when everyone in your immediate community is depressed, people who are really slipping off the edge go unnoticed. In the early 2010s, the “spice” epidemic hit the Navy hard. One sailor got high and passed out in the berthing barge with a spice pipe still in his lap, which launched a probing investigation onboard that had all of us afraid to even associate with anybody who might seem guilty. This is another impossibly complicated situation, and since the military is only beginning to test for the drug in your system, hearsay or suspicion by association can be enough to get you kicked out. This left many sailors hanging out to dry: These were people that were dealing with tremendous pressure by self-medicating, and nobody could help them.

I’m guilty here. I turned a cold shoulder to sailors who were crying out for help, all because I was terrified of being associated with them. That’s something I have to carry now.

Navy bootcamp actually sets the precedent for what happens in the fleet. Right away, a small group of sailors is selected, receives symbolic leadership ranks, and essentially carries the rest of the team to the finish line. The problem is, once you’re in the fleet, nobody can carry you.

As much as I resented the captain and chain of command for the lack of sleep, the constant drills, working until damn near midnight even while in port, pushing a broken ship through what should have been deployment-ending technical issues (and fires — so many fires), the all-too familiar echoes from the Shiloh lead me to believe that this is just how the Navy is. I truly don’t know if it can be fixed.

When I read articles about Petty Officer Mims asking, “Why were the signs missed?” I can’t help but think about a sign that our deck department’s chief placed on the door of the boatswain’s locker: “If you are going through hell, keep going.”

Why were the signs missed? Because you can’t tell a feces-covered HT running on negative 20 hours of sleep how shitty your day was. Everybody is depressed, everybody’s got issues at home, everybody is tired, and still, everyone must carry their weight for the crew to be able to complete its mission.

I’m not advocating any of this; I’m simply describing the realities of life in the fleet. I’m explaining why my first reaction to the Shiloh testimonies was “So what? Nothing new. Suck that shit up with a straw”: because, well, we had to. I have no idea if that’s the right or wrong reaction to my fellow shipmate’s misery. For now, let’s go with “it’s complicated.” And I’m not sure how you simplify it. But being honest about fleet life is a good start.