When a sailor from USS Shiloh (CG-67) went missing last summer, presumably lost overboard in the Pacific, only to be... 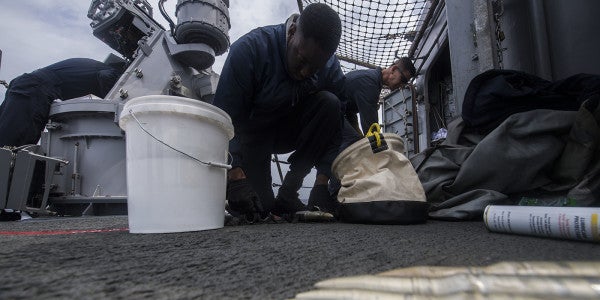 When a sailor from USS Shiloh (CG-67) went missing last summer, presumably lost overboard in the Pacific, only to be found a week later hiding out in the ship’s machinery spaces, some readers could be forgiven for wondering what was going on in that command.

Quite a lot, and none of it good, it turns out.

Navy Times this week published comments by sailors aboard the USS Shiloh — a Ticonderoga class guided-missile cruiser named for one of the bloodiest days in American military history — taken from command climate surveys ordered aboard the ship in the past two years under the watch of Capt. Adam M. Aycock, who recently completed his command tour on the ship. The crew’s comments paint a picture of a ship gone amok, in the same chain of command as two West Pacific destroyers whose at-sea collisions have spurred a stem-to-stern review of the United States’ entire surface warfare fleet.

The Shiloh crew charged that Aycock ruled unilaterally and aggressively, “neutered” the chiefs mess, and punished minor infractions with time in the brig, where sailors subsisted on bread and water. The result was “dysfunction from the top, suicidal thoughts, exhaustion, despair and concern that the Shiloh was being pushed underway while vital repairs remained incomplete,” Navy Times’ Geoff Ziezulewicz reported.

The damning report highlighted what it said were common complaints in the Shiloh sailors’ comments, including:

That may seem par for the course for hyperbolic scuttlebutt on any overworked forward-deployed ship, but three retired Navy surface captains who reviewed the surveys for Navy Times were pretty much horrified by what they’d read:

They expressed dismay and questioned if the Navy did enough to correct the situation.

“The disrespect shown to Sailors in this ship was unforgivable,” said Wallace Lovely, a retired Navy captain and surface warfare officer who led Destroyer Squadron 31 after serving as the commander of the Frigate Samuel B. Roberts.

“The large number of lengthy comments from the respondents is not normal and the number of consistently negative comments is shocking.”

Such reports always include some disgruntled sailors, but Lovely said he had never seen it at the Shiloh’s level.

“I felt the tension while reading these surveys and can’t imagine what a Junior Sailor would be thinking while living through this scenario,” he said. “We’re lucky that a suicide or other casualty didn’t occur due to this oppressive environment.”

Things never got that bad, apparently, though the case of 3rd Class Peter Mims, a gas turbine systems technician, last June certainly brought Shiloh unwanted attention. When Mims failed to muster, he was presumed to have been swept overboard; a 50-hour search of the ocean around Shiloh failed to turn him up. But after a week, he was found hiding out in the engineer room and sent to the brig. He now faces charges that could bring him a year in military prison and a dishonorable discharge.

It's amazing how much a toxic CO can poison morale. Saw the change myself on USS Last Ship – not as bad as USS Shiloh – but dramatic still.

His reasons for going AWOL while underway are still unclear, but the ship’s command climate immediately came under scrutiny.

Despite all that, Navy Times reports, Aycock’s career continues apace at the Naval War College. Navy officials told the paper on background that “Aycock’s superiors at Task Force 70 were aware of problems” in his command early on. Regardless of how long the Navy brass keeps him in uniform, his ship’s troubles will give them a lot to think about as they try to repair a rapidly unraveling and strategically critical surface fleet.