It’s been a rough year for the Navy, especially the forward-deployed surface fleet. Reeling from four underway mishaps that claimed... 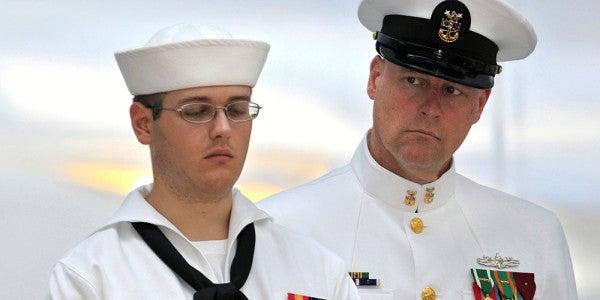 It’s been a rough year for the Navy, especially the forward-deployed surface fleet. Reeling from four underway mishaps that claimed the lives of 17 sailors in 7th Fleet alone, the service enters 2018 resolved to improve safety fleetwide — which that means addressing sleep deprivation among overstretched crewmembers.

And that could mean government-issue tinted spectacles for shipboard watchstanders.

That’s one novel fix the service is looking at, according to an analysis yesterday by USNI News. “Based on initial testing,” USNI’s Ben Werner writes, “Navy researchers think wearing specially tinted glasses for an hour or two before bedtime can make falling asleep easier.”

The idea — which could be especially helpful to all those poor operations specialists in the ship’s combat information center — “is to address sailors’ ability to fall asleep after working shifts at computer screens or in artificial lighting,” Werner writes.

That’s because exposure to artificial “blue light” produced by digital screens inhibits some of humans’ natural sleep mechanisms. So even after you shut ’em off, those infernal displays are keeping you more awake than you should be. (Your smartphone manufacturers already know this; it’s why they include a “night mode” to reduce the bluetones emanating from your little timewaster in the wee hours.)

The Navy is the lead agency responsible for all the DoD’s safety-glasses requirements, so the service spent much of the past year playing with inexpensive red-brown tints on existing spectacles — which can block out up to 70% of blue light bouncing in a sailor’s direction. Tests are ongoing, but Nita Shattuck, a top sleep researcher at the Naval Postgraduate School in Monterey, California, said in an April news release that “the results are very promising so far.”

Mind you, making sailors see the world through rose-colored glasses isn’t the Navy’s only new action on sleep issues — or even its most significant, long term. Last month, Vice Adm. Thomas Rowden, the commander of all surface forces, pushed out a new “Comprehensive Fatigue and Endurance Management” guidance to the fleet recommending seven hours of sleep a day for sailors “under ordinary circumstances underway” — a laudable step forward, but also a challenge for a sea service where extraordinary circumstances underway seem increasingly common.

It’s that challenge that’s leading the Navy to look at incremental, lowest-level fixes like tinted glasses. Speaking as a former operations specialist myself, I like the idea… though I’m also skeptical of wrapping sleep-enhancing spectacles around the head of an already-groggy sailor halfway through a turn on the electronic warfare console.

But the Navy already knows that. The glasses, the service conceded in a press release, would be worn only “an hour or two before bedtime,” not all the time, “since people need to be alert on the job.” Don’t worry: Nothing ever happens in that last hour or two on the midwatch, right?