“I don't think I can remember not being completely exhausted on watch, be it the middle of the day or... 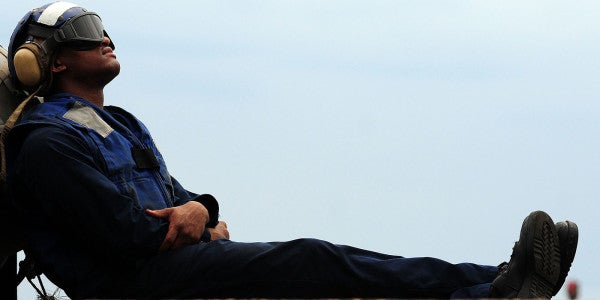 “I don't think I can remember not being completely exhausted on watch, be it the middle of the day or the seven-to-forever,” says August Sorvillo, a former Navy quartermaster who helped his ships navigate all manners of challenging channels and anchorages. “It's safe to say I've bought enough Red Bull, Monster, and Rip-Its that I could a sizable down payment on a house.”

Lori Schulze Buresh, a former surface warfare officer, still cringes thinking about the deployment where she stood the Navy’s notorious “five and dime” watches: five hours on, 10 off, then repeat — no matter what time of day or night. “The hardest part is being awake at some point every night and still doing a job all day,” she says. “It is hard on a body and hard on the mind.”

Gotta love the navy when you work 14 hours then sleep for 4 hours, and wake back up to work another 12 hours. 😒⚓️

After four different groundings and collisions in less than a year in its Japan-based 7th Fleet — including the crashes of the advanced guided-missile destroyers USS Fitzgerald and USS McCain this summer, leaving 17 sailors dead or missing — the Navy is cleaning house and doing some soul-searching. But beyond the particulars of each incident, service officials are intent on identifying broader issues that may leave crews more prone to deadly accidents.

Many current and former sailors have a suggestion for the Navy: Let your crews sleep more.

Worked for the past 33 hours, finally in bed about to sleep, waking up in 4 hours to get ready to go back to work again.. thanks Navy ☺️

It’s not a new refrain: Sleep deprivation, long a fixture in all the military services, is accepted by most sailors as a way of life, made slightly more bearable by strong coffee, midrats, and SWOnuts. In the naval service, “Sleep when you’re dead” is the unwritten 11th general order.

But science shows that this hard-charging ethos can yield a fleet of well-trained watchstanding zombies. In a 2012 military study, 39% of sailors reported that they were “frequently not getting enough restful sleep to function well at work and in their personal lives.” Previous studies have suggested that surface sailors lose out on five to nine hours of sleep every week they’re underway.

In 2015, the RAND Corporation published a two-year survey on sleep in the military, and the findings were dire. It showed “a high prevalence of insufficient sleep duration, poor sleep quality, daytime sleepiness, fatigue, and nightmares” across the military — particularly in the fleet.

RELATED: The Fitzgerald’s Watch Team Could Have Been Mine »

RAND found that out of all military communities, the Navy alone had one significant red flag: Sailors “with prior deployments had greater sleep-related daytime impairment than those without a prior deployment.” This is especially problematic for surface ships, which lean heavily on mid-level officers and petty officers with prior underway experience to conduct bridge and combat information center watches that are critical to safe navigation.

‘I have seen and heard things that weren’t there’

The problem is significant enough that when one sailor responded to the McCain collision by sharing her daily work schedule and sleep problems on Reddit this week, the thread exploded with hundreds of commiserating comments from vets of the surface, sub, and naval air communities.

“I averaged 3 hours of sleep a night” on a destroyer and cruiser, the sailor wrote:

I have personally gone without sleep for so long that I have seen and heard things that weren't there. I've witnessed accidents that could have been avoided because the person was so tired they had no right to be operating heavy machinery, including an incident in which someone got descalped and someone else almost losing a finger.

The responses, from veterans and civilians, were wrenching. “I work for an airline,” one commenter said. “If we operated on this schedule they would us down so fast we couldn't even look.”

The Navy knows sleep deprivation is a perpetual problem in its ranks. “Fatigue has measurable negative effects on readiness, effectiveness and safety,” Vice Adm. Thomas Rowden, commander of Naval Surface Force—Pacific, said in a fleet-wide message in 2016. “After a day without sleep, human performance drops to dangerously ineffective levels.”

Rowden and other senior Navy leaders have been taking pointers on keeping a ship’s crew well-rested from a “Crew Endurance Team” of military and civilian experts at the Naval Postgraduate School. Their suggestions include setting a “circadian watchbill” — organizing watches to conform to a 24-hour rotation, more in line with the human body’s natural sleep rhythms.

Asked whether any of 7th Fleet’s mishaps could be directly attributable to sleep and fatigue issues, the sailors are more circumspect. For one thing, there are no easy fixes; for another, everyone’s really busy and tired most of the time.

“It’s a factor, but it’s always been a factor,” one former surface officer told Task & Purpose. “But you’ve got to have watches.”

‘The practice briefing for the pre-briefing’

The officer says that sleep deprivation may be less of a cause than a symptom of bloat in sailors’ responsibilities, including arcane online training requirements (also a target of Secretary of Defense James Mattis), collateral duties, and a host of chores you don’t have to do, but should, like “the practice briefing for the pre-briefing, because the XO didn’t think we were ready yet.”

“The focus on collateral duties in our modern Navy part of the blame for a lot of missed days of sleep,” Sorvillo, the enlisted navigator, says. “On my last ship I, as well as quite a few others, had at least two full time duties to perform before going on watch… Eighteen to twenty hour days was the norm for six to eight months.”

Regardless of whether sleepy sailors can keep it together for a successful bridge watch, the Navy’s grueling schedules may wreck their crews even after getting out of uniform: Research suggests that fatigue problems, once programmed into a service member’s biology, can follow them for life. “[O]nce initiated, sleep disturbances may follow a persistent course, lasting for years after deployment,” RAND’s study concluded. The authors added that “sleep problems are prevalent, debilitating, and persistent in servicemember populations in the post-deployment period.”

That’s no news to Sorvillo. “I've been diagnosed with chronic insomnia,” he told Task & Purpose.

Despite leaving the fleet in 2009, he says, “I still get at most four hours of sleep a night.”