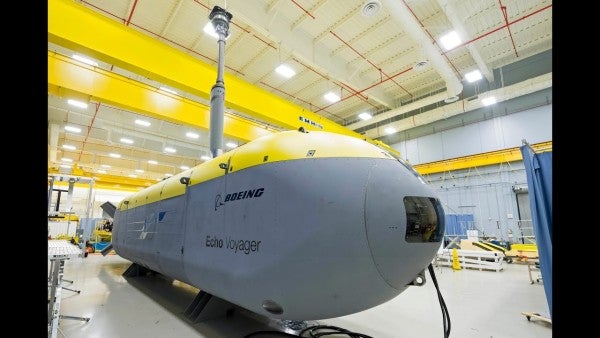 The Navy is bulking up its fleet of autonomous robot vessels with the purchase of a cadre of four of Boeing's extremely large and incredibly grandiose unmanned Orca submarines.

On Feb. 13, the Navy awarded Boeing a $43 million contract to produce four of the 51-foot Orca Extra Large Unmanned Undersea Vehicles (XLUUVs) that are capable of traveling some 6,500 nautical miles unaided, the U.S. Naval Institute reported.

According to USNI, the Navy could potentially deploy the Orcas from existing vessels to conduct “mine countermeasures, anti-submarine warfare, anti-surface warfare, electronic warfare and strike missions.”

But as Popular Mechanics points out, the Orca's modular design and relatively inexpensive price tag make the robo-subs a potential game-changer for a Navy that's struggling to grow to 335 hulls:

Orca could even pack a Mk. 46 lightweight torpedo to take a shot at an enemy sub itself. It could also carry heavier Mk. 48 heavyweight torpedoes to attack surface ships, or even conceivably anti-ship missiles. Orca could drop off cargos on the seabed, detect, or even lay mines. The modular hardware payload system and open architecture software ensures Orca could be rapidly configured based on need.

This sort of versatility in a single, low-cost package is fairly unheard of in military spending. The nearest rough equivalent is the Navy's Littoral Combat Ship, which costs $584 million each and has a crew of 40. While LCS is faster, has the benefit of an onboard crew, and carries a larger payload, Orca is autonomous—and cheaper by orders of magnitude.

The purchase comes amid a push into autonomous vessels for the Navy, and not just because of President Donald Trump's newfound focus on artificial intelligence. Earlier this year, the Navy's autonomous Sea Hunter trimaran, engineered for minesweeping and sub-hunting, traveled from San Diego to Hawaii and back again without a single sailor aboard in a historic voyage.

The Navy has pulled all the stops in “the last six or seven months,” Navy surface ship executive Rear Adm. William Galinis told Breaking Defense. “We've got a set of RFIs we're going to be putting out here probably in the next few days to industry to really start that process, put some proverbial meat on the bones.”

No word yet if this particular “robot wolfpack” of four Orcas will patrol the oceans in search of strippers and cocaine:

SEE ALSO: The Navy Is On The Hunt For Robot Warships