Editor's note: This story first appeared in April 2018 and is being reposted due to reader interest. After 16 years... 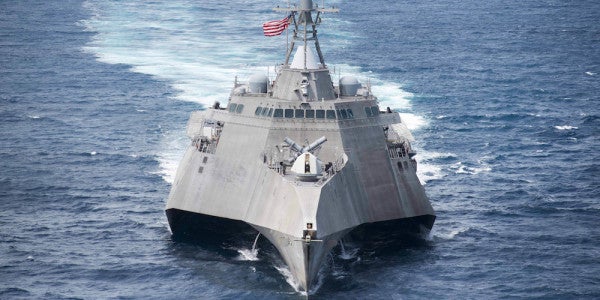 Editor's note: This story first appeared in April 2018 and is being reposted due to reader interest.

After 16 years and billions of dollars, the Navy may have finally acknowledged that its Littoral Combat Ship program looks like a miserable failure.

The service “may not” deploy any of the dozen small surface combatants this year despite officials’ previous plans to deploy several to join the 7th and 5th Fleets in Singapore and Bahrain respectively, the U.S. Naval Institute first reported on April 11.

Given the embarrassing cost overruns and frequent mechanical failures that have plagued the program, the exquisitely-detailed report suggests that the Navy has run out of patience for the disappointment mill that is the Littoral Combat Ship, once the backbone of the future fleet that could have 355 ships.

In addition to the deploying ships themselves being in maintenance, so too are the training ships that will be required to help train and certify the crews. The Navy upended its LCS training and manning plans in 2016 when then-SURFOR commander Vice Adm. Tom Rowden announced a change to a blue-gold crewing model and a ship reorganization … not only does the deployable ship have to be in the water and ready for operations, but so does the training ship.

It’s clearly not just a matter of organizational chance that’s complicated the deployment of the LCS. Not only did the Navy reduce the number of LCSs ordered from Lockheed Martin and General Dynamics back in 2014 out of concerns over the vessel’s performance, but a review of the Navy’s LCS fleet by the Pentagon’s operational testing and evaluation arm, conducted between 2016 and 2017 and published in January 2018, revealed significant structural problems with the program’s Freedom and Independence variants.

This problems include: a concerning deficit in combat system elements (namely radar systems), limited anti-ship missile self-defense capabilities, and a lack of redundancies for vital systems necessary to reduce the chance that “a single hit will result in loss of propulsion, combat capability, and the ability to control damage and restore system operation.”

While the report recommends that the Navy continue to address the Pentagon’s recommendations, the service is already eyeing other hulls to take on the coastal combat operations initially envisioned for the LCS. In July 2017, the service posted official requirements for a brand new frigate under the Guided Missile Frigate Replacement Program or FFG(X) that will “employ unmanned systems to penetrate and dwell in contested environments” — basically, be the LCS but without the headache (and the additional costs of upgrading each LCS warship to an FFG(X) configuration.)

“In many ways, this FFG(X) design goes beyond what today’s LCS can do, particularly as it relates to surface warfare,” as USNI News put it at the time. “The RFI states the frigate should be able to conduct independent operations in a contested environment or contribute to a larger strike group, depending on combatant commander needs.”

Will 2018 be the last gasp for the troubled LCS program? Knowing the DOD, probably not — but the USNI News report on the lack of LCS deployments only solidifies one truth about the vessel: LCS, as The War Zone put it, almost definitely stands for ‘Little Crappy Ship.’