This Is Why The Pentagon Could Never Build A Death Star

Say what you will about Darth Vader, but he knew how to run a modernization program. When he was put... 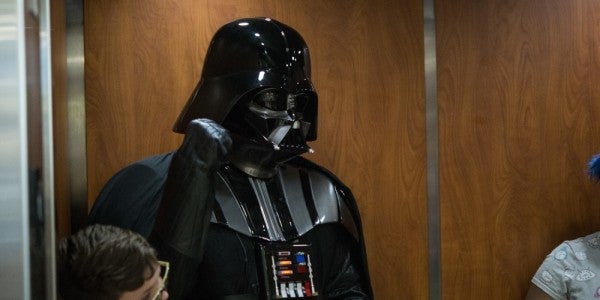 Say what you will about Darth Vader, but he knew how to run a modernization program. When he was put in charge of the Death Star Joint Program Office, that battle station reached initial operating capability on time – a feat the Pentagon seems unable to replicate many years later.

The Defense Department could learn a lot from Vader. For example, is there any mention in the “Star Wars” trilogy of the second Death Star being over budget? Of course not. You best believe that the Sith bad-ass would have locked the prime contractor into a fixed-price contract that included a clause such as, “JPO reserves the right to force choke your CEO every time the software doesn’t work as advertised.”

Indeed, the Empire’s stunning success in The Return of the Jedi led your humble Pentagon correspondent to wonder how the Defense Department would fare should it decide to build a Death Star of its own. From this reporter’s limited experience covering military acquisition and modernization efforts, here is what a Pentagon Death Star program might look like.

If the Army were in charge of building a Death Star, you can be guaranteed that the program would be cancelled. The service’s last modernization successes were decades ago: The Abrams tank, Bradley Fighting Vehicle, Black Hawk transport helicopter, Apache attack helicopter, and Patriot missile defense system – the Bradley is nearing the end of its life cycle so the Army is working to replace it.

Since then, Congress has killed nearly all of the Army’s high tech weapons programs including the Crusader self-propelled howitzer, the Comanche helicopter, and Future Combat Systems – which urinated away a Niagara Falls of cash.

The Army is so ass-backwards on developing new stuff that the service’s master plan is to lure highly paid entrepreneurs from Silicon Valley to Austin, Texas, to work for Futures Command. One can imagine the Army’s recruiting campaign for Project Death Star: “Are you ready to work on Hoth?!?”

No, a project that could potentially bankrupt the United States would have to be helmed by the two services Congress loves rewarding for failure: The Air Force and Navy.

Let’s start with the Navy, which proved that when you put ALL of your whiz-bang new technology into one ship – namely the Gerald R. Ford-class aircraft carrier – not a single goddamn thing will works at sea.

The reason the Navy gets away with building vessels that don’t work is that it single-handedly keeps U.S. shipbuilders solvent – and that makes Congress very happy. Former Navy Secretary Ray Mabus will be remembered for two things: Giving a lot of work to shipbuilders in Mississippi, where he was governor; and his jihad against enlisted ratings, which was ultimately defeated.

This allows the Navy to keep building Littoral Combat Ships, which have so little protection that in a war against Russia or China, they might sink slowly enough to let some of the crew abandon ship in time.

Were the Navy to lead Project Death Star, it would shrug off concerns about the exposed thermal exhaust port leading straight to the main reactor by saying the Death Star was too important to the Defense Department Industrial Base Sector to cancel. After all, The Pentagon is primarily a jobs program with a $700 billion budget, and this means defense industry has learned that the key to keeping big weapons systems alive when they bleed money and run decades behind schedule is to spread the work out into all 50 states.

You can bet your life that a piece of the Death Star would be made in each Congressional district, because it doesn’t matter if they are Republicans or Democrats: Lawmakers love defense jobs. (Just ask Sen. Richard Blumenthal, D-Conn., if he has any qualms about the exploding costs of the Marine Corps’ CH-53K King Stallion helicopter, which is built in his home state.)

Given all of the above, it is likely that the Pentagon’s Death Star would be a lot like the F-35 – years behind schedule, way more expensive than originally expected, and impervious to any criticism.

Prime contractor Lockheed Martin seems in no hurry to fix a glitch in the F-35C’s helmet that prevents Navy pilots from seeing a ship’s flight deck at night. The Marine Corps’ F-35B has a faulty bracket that caused one plane to catch fire in flight. And all of the services’ F-35s were recently grounded after a fuel line issue contributed to an F-35B crash.

Just like the F-35, it would take decades to work out all of the Death Star’s software glitches and design flaws. But given how long it takes for the Pentagon to field new weapons systems, China would likely steal the Defense Department’s Death Star plans and build their own in half the time, said Rachel Zissimos, a defense expert at the Heritage Foundation think tank in Washington, D.C.

Moreover, the estimated $858 quadrillion required to build a U.S. Death Star probably does not include all of the project’s costs, especially considering the “unknowns” involved with building such a battle station, Zissimos told Task & Purpose.

“I think delays in initial operational capability for the death ray would yield a Death Star with a functional tractor beam but no combat function and it would end up as high powered vacuum repurposed for the cleanup of space junk,” she said.