Could This Reporter Survive The Army Combat Fitness Test?

While explaining the specifics of the Army’s new Combat Fitness Test recently, Maj. Gen. Malcolm Frost turned to a reporter... 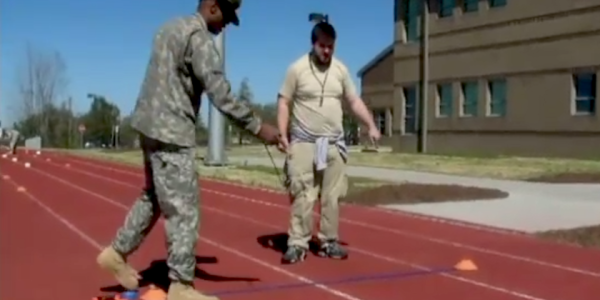 While explaining the specifics of the Army’s new Combat Fitness Test recently, Maj. Gen. Malcolm Frost turned to a reporter and delivered a subtle challenge to members of the press: “Yes, you can take it if you want.”

Can he read minds? Your favorite Pentagon reporter was thinking about the time in 2011, when he attempted to complete the Army’s old physical readiness test. At nearly 280 pounds and standing just 5 feet 10 inches tall, this reporter was, at the time, the most out-of-shape human to step foot on an Army PT field since Maj. Gen. Winfield Scott last mounted a horse. After seeing this husky journalist flouncing toward him, an Army drill sergeant told a cameraman, “I don’t think he’s going to make it through, to be honest with you.”

Listening to Maj. Gen. Frost, your humble journalist had a fleeting thought: What would it take to get in shape for the combat fitness test and actually pass this time?

The short answer is: A lot.

The new test is age-neutral, and that means that 50-year-old soldiers who possibly have injuries from training and deployments will have to hurl a 10-pound medicine ball as far as 19-year-olds fresh out of Advanced Individual Training.

All battalion and brigade commanders, as well as command sergeants major, will have to pass the test in their pre-command courses before assuming their duties, said Frost, head of the Army Center for Initial Military Training.

If you listen carefully, you can hear a slew field-grade officers and crusty senior enlisted leaders describing their enthusiasm for the test by finding new and creative ways to use the word “bulls**t.”

The purpose of the new test will be to set a single level for physical fitness that all soldiers will have to meet, Frost told Task & Purpose after the roundtable.

“Now, the average 20-year-old might end up achieving a higher score than the average 50-year-old, but it is really more about meeting the baseline standard and that is really what our focus is on – can a soldier meet the Army standard,” Frost said. “Combat does not differentiate between a 50-year-old soldier with a rifle and a 20-year-old: Both need to be able to meet the physical requirements of their combat-related tasks.”

Frost also said he is serious about offering reporters the chance to take the new test and the Army is expecting to hold a media day in the near future can try out events.

That means this reporter could have a second chance to reclaim his dignity on the PT field.

Your correspondent is older than his 39 years so he sought out workout tips for how old-timers can prepare for the Army’s age-neutral standards.

Step 1: Work out every day, said Sergeant Major of the Army Daniel Dailey.

If you haven’t worked out in a while, “Start up easy on the exercise, and sneak up on the running especially,” said Brian Schilling, professor and chair of kinesiology and nutrition sciences at the University of Las Vegas.

For those of you who used to working in a tactical operational center, “running” is defined as putting one foot in front of the other until you accelerate to 3.5 miles per hour or faster. If you haven’t tried it in a while, Schilling recommends starting with brisk walking to build up your connective tissue. Also, try rowing to work on your cardiovascular system.

If you are like this friendly Pentagon correspondent, you would also need to lose weight to meet the Army’s standards. Thankfully, Dailey has a tip for that too.

“Push away from the table!” Dailey said. “Cut down on the cookies, candy, and doughnuts!”

David Levitsky, a nutrition and psychology professor at Cornell University, suggests going slowly – trying to lose one pound per week – so that you can make changes to your diet that you can live with, such as reducing snacking.

Levitsky also recommends investing in a scale to track your weight loss. “The reason we gain weight is we are constantly inundated by stimuli in our environment that cause us to eat,” he said. “We are programmed to – when we see food – eat it. Advertisers know this. The only way that I know to resist that stimuli is that scale.”

Ease into the exercise. Get a scale. Resist the stimuli. Got it. Your correspondent figures that with a year or so of preparation, he would fare about as well on the Army test as a colonel on limited duty for getting the mother of all hernias while practicing with the medicine ball.