"More testing options will put flexibility in the hands of our Airmen – where it belongs." 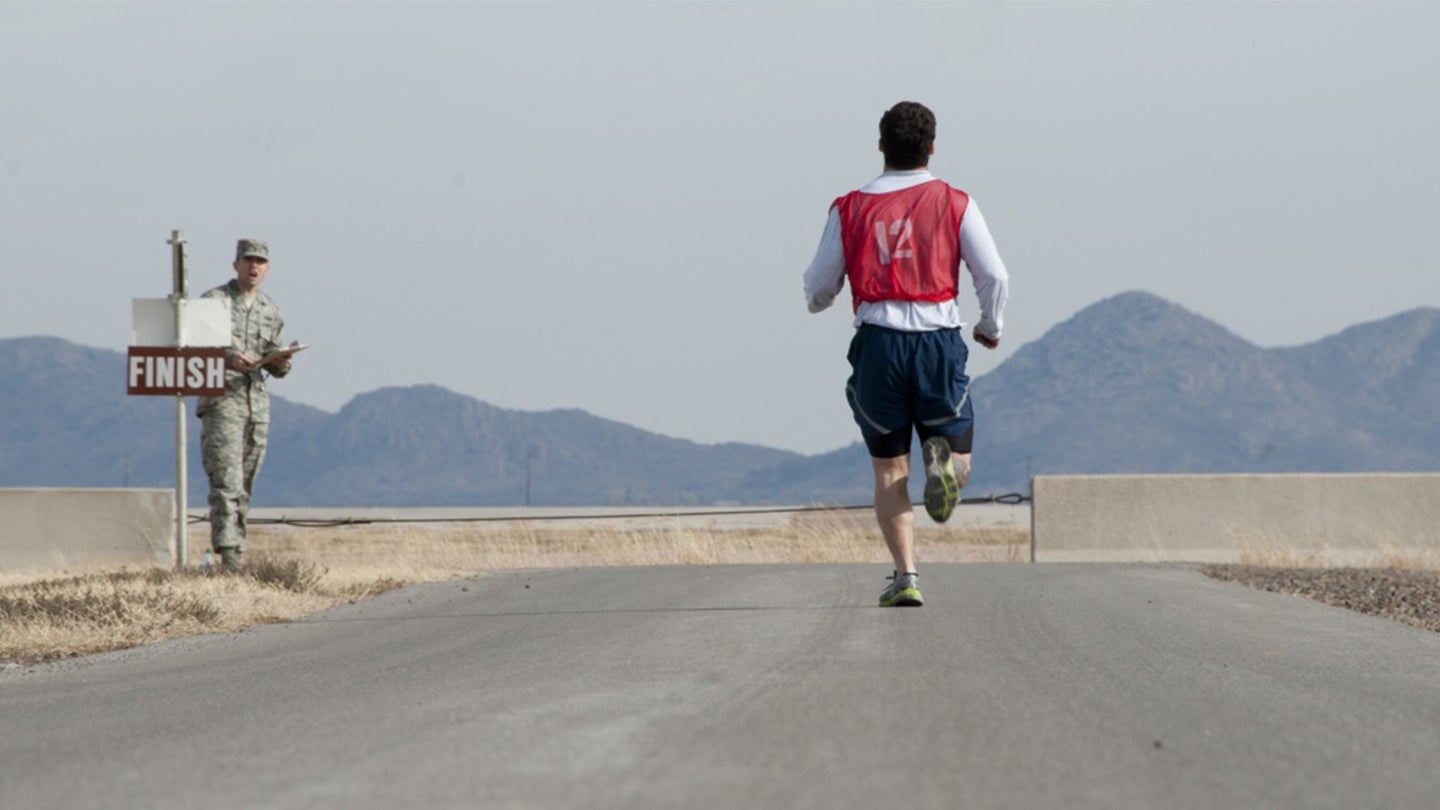 Editor’s note: This story has been updated to include more details that the Air Force released on Friday.

A swarm of keyboard warriors took to the field this week to rag on the Air Force for announcing it would allow airmen to walk instead of run for the aerobic portion of their annual fitness test, which the service will try out for six months starting in January 2022. Plenty of the critics accused airmen of being soft, lazy, or a national security risk.

But as it turns out, the walking option is based on years of research and feedback from airmen which shows that walking works just fine for testing fitness, especially for the goals of the Air Force. After all, not many airmen are expected to serve on the front lines in a combat situation, and those that do often have, or are developing, their own fitness tests tailored to their specific job.

Which is to say: If you’re an airman in a physically demanding job, like special operations, you are most definitely running your ass off during morning PT.

“This initiative is the result of Airmen providing feedback to Air Force leaders through the physical fitness working group in conjunction with looking at the way other services complete their physical fitness programs,” Maj. Leah Brading, a spokesperson for the Air Force told Task & Purpose. “From the data collected, the Air Force fitness working group conducted research and testing on the health benefits of the current fitness components and various other components to come up with the alternative options.”

Making the service work better for individual airmen seems to be the main goal of the PT changes, according to its top military leader, Chief of Staff Gen. Charles “CQ” Brown, Jr.

“We are moving away from a one-size-fits-all model,” Brown said during an announcement of PT changes in May. “More testing options will put flexibility in the hands of our Airmen – where it belongs. We know not all Airmen maintain their fitness the same way and may excel in different areas. Alternate components provide choices while still providing a mechanism to determine overall fitness.”

Earlier this week, the Air Force announced it would also allow airmen to choose between planks, cross-leg reverse crunch and sit-ups for the core strength measure of its fitness test. For the final portion of the test, airmen would be allowed to choose between push-ups and raised-hand push-ups, which allow airmen to alternate lifting their hands up while in the push-up ready position. The test will still score participants on a 100 point scale, with the aerobic portion being worth 60 points and the other two worth 20 points each. The finalized scoring charts will be broken down by gender and age, the Air Force explained in a statement on Friday.

Beyond this once-a-year test, 10 career fields in the Air Force will establish their own job-specific fitness test over the next two years, Air Force Times reported last January. Some of those jobs include firefighters, explosive ordnance technicians, security forces and special operations. Airmen in jobs with an approved Tier 2 test will not have to take the Tier 1 test that everyone else does, according to service regulations.

Of course, simply getting into certain fields like combat control or pararescue involves a ton of arduous physical training. But the Tier 2 tests, as they will be known, are supposed to mimic the specific tasks which airmen in those jobs have to perform often.

For airmen taking the Tier 1 test, the walking portion will be one mile long, as opposed to the run, which is 1.5 miles. In a statement on Friday, the Air Force explained that the test will also take into account the airmen’s age, weight, heart rate. While the scoring charts and time limit for the test are not yet available, previous research shows that walking is still a good measure of an airman’s aerobic capability. Previously, airmen could walk instead of run only if they had a medical waiver to do so. Starting in January, airmen will be able to choose between walking, running and sprinting to carry out the aerobic portion of the test.

“[T]he one-mile walk was found to be a reliable alternative cardiovascular fitness test to the 1.5-mile run in moderate to high fit airmen; therefore a majority of airmen can expect to earn equivalent scores,” wrote the journal Military Medicine in a 2011 study, which was cited in a 2021 RAND review of the Air Force fitness program.

The one-mile walk was first implemented “as an alternative cardiovascular fitness test for injured Airmen who are medically exempt from running,” wrote Military Medicine.

RAND also found that most airmen they spoke to never found themselves running while on a deployment.

In the past, the walking test has been useful not only for airmen recovering from injuries but also for airmen with bad allergies who are stationed at bases with poor air quality. One such airman said she never had any issues with running until she came to Cannon Air Force Base, New Mexico, where she developed bad allergies due to the air quality. That, combined with the high altitude, led her primary care manager to put the airman on a walking profile.

“The walk wasn’t bad. It just burned my shins,” the airman said. “It was easy for me because I’m a fast walker regularly, but you really have to book it for the walk test. It was like a 1.2 mile test and you had to walk it in under 17 minutes and some seconds.”

Lt. Gen. Brian Kelly, deputy chief of staff for Manpower, Personnel, and Services, said in a statement on Friday that the walking test is harder than you might think.

“The ‘walk’ is not a stroll in the park and both the pace required and method for computing aerobic fitness make it 100% equivalent to the run,” he said. “In fact, I think we’ll find fewer people will prefer that option over the more traditional mile-and-half run.”

Several other airmen who performed walking tests in the past seemed to agree.

“With a few months of rigorous training 3 times a week it was easy,” one said on Reddit. “That said, when I first started training for it my shins hated me and I wished I could run instead. F””k the walk test lol.”

Another commenter, this one responding to a recent Task & Purpose story on the proposed fitness test, said that, in her experience, job ability took priority over physical fitness in the Air Force.

“Back in my day we had the 1.5 mile run or three mile walk. My commander would start the stopwatch two minutes after the last runner left the starting line,” she said. “As he said…. I don’t care if you can run, I care if you can fix aircraft and keep people safe.”