Britain’s Ministry of Defense has released footage of a Royal Air Force drone strike that it claims disrupted a public... 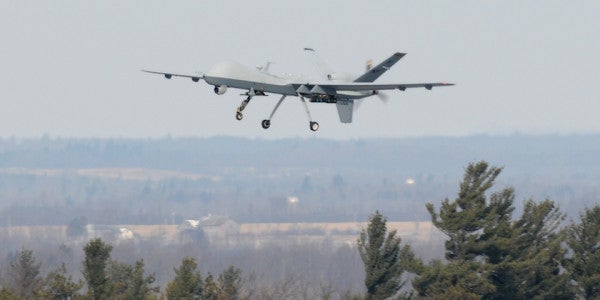 Britain’s Ministry of Defense has released footage of a Royal Air Force drone strike that it claims disrupted a public execution being staged by ISIS in Syria back in May.

The strike was reportedly carried out by a Reaper drone on May 9 as ISIS militants were preparing to kill a pair of shackled prisoners before a group of spectators in the town of Abu Kamal, which is located in eastern Syria near the Iraq border.

According to the MoD, the Reaper was flying an armed reconnaissance mission when its pilots, located 2,000 miles away in jolly old England, spotted the militants unloading the prisoners from a van. A large crowd was assembled nearby.

“Given the large number of civilians present, the Reaper’s crew could not target directly the [ISIS] fighters about to carry out the murders,” the MoD explained in a statement to The Guardian in May.

The crew also spotted an armed ISIS sentry on a nearby rooftop, whom they immediately obliterated with a Hellfire missile. This appears to have done the trick.

“The individual whom we engaged was a sniper in over-watch to shoot civilians who sought to move away from the execution, let alone to protect the planned execution itself,” Air Commodore Johnny Stringer, commander of UK air operations in Iraq and Syria, told The Telegraph.

The video, which the MoD released for public consumption on Sep. 19, shows the crowd start to scatter even before the missile hits. As the dust settles, people can be seen running in all directions. It is unclear what happened to the prisoners.

Speaking to British troops in Iraq earlier this week, Sir Michael Fallon, the U.K.’s Defense Secretary, said Britain has carried out over 1,500 strikes against ISIS targets in Iraq and Syria since the campaign to drive the terror group out of the region began.