A 49-year-old U.S. military veteran convicted for trying to join ISIS two years ago has been sentenced to 35 years... 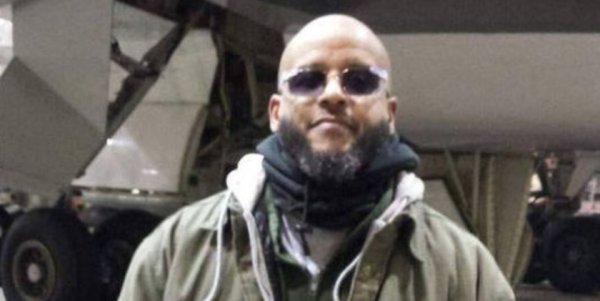 A 49-year-old U.S. military veteran convicted for trying to join ISIS two years ago has been sentenced to 35 years in prison, according to the Department of Justice.

In March 2016, a federal jury found Tairod Pugh, a former U.S Air Force mechanic from New Jersey, guilty of attempting to provide material support to a foreign terrorist organization and obstruction of justice. Among the dozens of U.S. citizens arrested for trying to either join ISIS or carry out a terrorist attack on its behalf, Pugh was the first to be handed down a verdict.

“The defendant turned his back on his country, and the military he once served, to attempt to join a brutally violent terrorist organization committed to the slaughter of innocent people throughout the world,” Acting United States Attorney Bridget Rohde said in a statement on May 31.

Pugh, a convert to Islam, was arrested on January 16, 2015, in Asbury Park, New Jersey, and has maintained his innocence ever since.

Several days before his arrest, Pugh had flown from Egypt to Turkey, after spending about a year in the Middle East working for small American airlines contracted by the Pentagon t0 support military operations in the region. Turkey is a common jumping-off point for would-be jihadists entering Syria, which has been embroiled in a brutal civil war since 2011.

Turkish authorities detained Pugh immediately after he landed in Istanbul and deported him, via Cairo, to John F. Kennedy International Airport in New York, where an undercover FBI agent was waiting for him. According to the Justice Department, the FBI closely monitored Pugh until his arrest.

While in Cairo, Egyptian authorities found that Pugh was carrying “a laptop computer and four USB thumb drives that had been stripped of their plastic casings and an iPod that had been wiped clean of data,” as well as “solar powered chargers, compasses, a black balaclava, and clothing suitable for war-torn Syria,” the Justice Department said.

During Pugh’s trial at the federal courthouse in Brooklyn, which began on Feb. 29, 2016, prosecutors presented evidence showing that he had researched how to cross the border into Syria and that his laptop contained ISIS propaganda and execution videos. The prosecution also demonstrated that Pugh had voiced his support for ISIS to coworkers and on Facebook, encouraging his followers to “support [ISIS] with your bodies.”

Another piece of evidence was a letter Pugh drafted to his wife while in Egypt but never delivered. It read:

I am a Mujahid. I am a sword against the oppressor and a shield for the oppressed. I will use the talents and skills given to me by Allah to establish and defend the Islamic State. There is only 2 possible outcomes for me . Victory or Martyr.

Pugh did not mention the third possible outcome: Prison, a fate his lawyers attempted to spare him from by arguing that, because he didn’t send the letter to his wife, Pugh never actually intended to join ISIS, according to The New York Times.

According to CNN, Pugh had been on the FBI’s radar since as far back as 2001, when he was working for American Airlines. A criminal complaint filed that year showed that a co-worker told the FBI that Pugh “sympathized with Osama bin Laden” and “felt that the 1998 bombings of U.S. embassies overseas justified and expressed anti-American sentiment.”

William F. Sweeney Jr., the assistant director-in-charge of the FBI’s New York field office, commended the federal court’s decision to impose a heavy sentence on Pugh as a necessary a warning to others thinking about supporting terrorist groups like ISIS.

“The alarming reality of this case is that Pugh served in the U.S. military but ultimately traded in his pledge to defend the United States to defend the Islamic State,” Sweeney said in a statement. “Today’s sentencing should send a strong message to those who seek to support terrorist groups — they will face serious consequences for their actions.”