ISIS, the global terrorist organization that once held huge swaths of Iraq and Syria and is now fighting to defend... 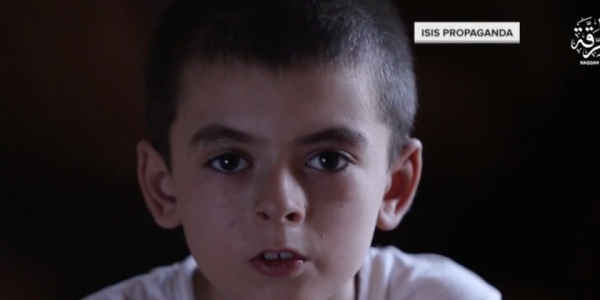 ISIS, the global terrorist organization that once held huge swaths of Iraq and Syria and is now fighting to defend what little remains of its failed caliphate, has released a propaganda video featuring a child who claims to be the son of a U.S. soldier,NBC News reports.

Speaking in fluent but accented English, the boy in the seven-minute video talks directly at the camera and, at one point, appears equipped with a flak vest and assault rifle. He identifies himself only as Yousef, age 10. NBC was not able to verify the boy’s name, nationality, or whereabouts.

“My father’s an American soldier who fought the mujahideen in Iraq,” he says. “I didn’t know much about Islam except the name. When me and mom came to the Islamic State, we started learning the correct Islamic creed.”

As NBC notes, Yousef — who is not the first child to be featured in an ISIS propaganda video — appears to be reading from a script. He claims to be living in the Syrian city of Raqqa, where U.S.-backed forces are currently engaged in a pitched battle with an estimated 2,000 ISIS militants holed up in the group’s last major stronghold.

Yousef mentions President Donald Trump and issues a warning to the United States: “Get ready, for the fighting has just begun.”

A portion of the video focuses on Yousef’s life in Raqqa, including his playdates with another boy whom he identifies as his 7-year-old best friend. One clips shows the duo exploring the rubbled remains of a bombed-out building.

If Yousef is in fact in Raqqa, his chances of survival rank among the lowest in the world. Syria, which has been embroiled in a bloody civil war since 2011, is currently rated theworld’s deadliest conflict zone. And the consensus among foreign policy experts is that it is only a matter of time before Raqqa falls.

“ISIS wants the world to believe that life in Raqqa is stable and that it can protect the people it proclaims to represent,” Laith Alkhouri of security firm Flashpoint told NBC. “The fact is, life in Raqqa is dangerous and brutal, and ISIS’s control over there is diminishing by the day.”