The Twitter and YouTube accounts for U.S. Central Command was the victim of an apparent cyber attack today, as the... 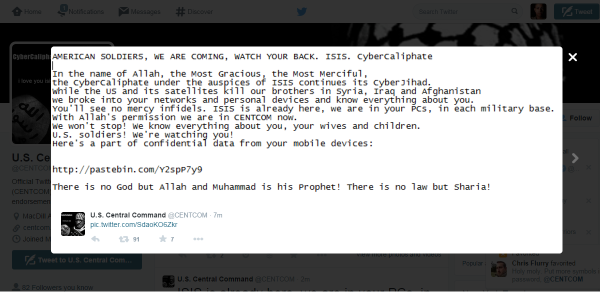 The Twitter and YouTube accounts for U.S. Central Command was the victim of an apparent cyber attack today, as the images and postings associated with the accounts began depicting threatening messages from proclaimed agents of Islamic State terrorists.

“AMERICAN SOLDIERS, WE ARE COMING, WATCH YOUR BACK. ISIS,” the first tweet read at 12:30 p.m. East Coast time.

A person reached via phone at CENTCOM's public affairs office told Task & Purpose that officials were dealing with the situation and did not have immediate comment at this time.

Following the first post is an image that depicts military personnel in a wooden office building, similar to the structures used in forward deployed areas or training sites. The image is undated.

“We won’t stop! We know everything about you, your wives and children,” read another post. It included a series of contact rosters with the names of military personnel and what appear to be addresses to their offices, as well as official emails. However, it does not appear that any of this information is classified.

The bellicose rhetoric comes as the United States and its allies are several months into a prolonged military campaign dubbed Inherent Resolve to erode and defeat Islamic State militants that have controlled territory in Iraq and Syria.

The self-declared Islamic State has distinguished itself among extremist groups with active social media and cyber campaigns. Sure enough, some of the posts in were accompanied by the hashtag #CyberCaliphate.

It’s worth noting that only some of CENTCOM’s social media channels were controlled at any point by ISIS loyalists, and it doesn’t appear that any classified information was leaked.

Hope Hodge-Seck at the Marine Corps Times struck the right chord on Twitter.

I'm sure the ISIS hackers are terribly impressed with themselves. They shouldn't impress the rest of us.

Within an hour, Twitter suspended the account. Shortly before the page was shut down, the most recent posts included images of grid maps with routes and force positions and include the titles “Korean Scenarios” and “China Scenarios.”

However it is unclear if these are authentic tactical plans or just documents belonging to wargames which occasionally ‘take place’ in real world countries.Hayes Brown, a foreign reporter at BuzzFeed, noted on Twitter that most of the purported CENTCOM documents were just model U.N. scenarios. The hacked YouTube channel contains stunning juxtapositions. Beside the two posted ISIS propaganda videos are videos CENTCOM actually uploaded the week before that show coalition airstrikes against ISIS targets.

In another hilarious juxtaposition, minutes before the cyber attack, the Twitter account for President Barack Obama, which is actually run by the political action committee Organizing for Action, sent out this tweet:

Jokes on cyber security aside, most military officials, journalists, and security experts were in agreement that the hack, while bellicose in nature, did not constitute a serious threat of any sort.

“Folks get that CENTCOM doesn't run its twitter feed from its classified system, right?” said Dr. Rebecca Johnson, a military ethics professor at the Marine Corps staff college, on Twitter.

ISIS’ strategy has largely consisted of trying to encourage Westerners to join its ranks or commit acts of violence on its behalf. One of the slain suspected terrorists in the Charlie Hebdo attacks in France has surfaced in videos claiming to be a member of the Islamic State.

The Islamic State feeds and recruits off of its ability to impact the daily lives of everyday Westerners from thousands of miles away and instill fear. To that end, they have repeatedly threatened attacks of U.S. service members in the United States.

Near the end of 2014, the FBI began warning U.S. service members of potential threats. While terrorist threats are by their very nature serious, many in the military community refused to cower to bellicose rhetoric. That group included Marine Medal of Honor recipient Dakota Meyer, who repeatedly mocked the group on social media.

No matter how many DoD Twitter accounts ISIS agents hack, they’ll never be as successful as Dakota Meyer was with this tweet:

Wonder if any ISIS members want to drop by and join my book club @ScoutMedia pic.twitter.com/Wft72YYM0I

“I take the threat seriously, but you are talking about a bunch of cowards,” Meyer told Military Times in an interview. “We're not cowards. We're the most feared nation on the face of the planet, and we're worried about some radical group, some extremists that prey on the weak? I mean, that's like sheep preying on lions.”