When confronted with thousands of pounds of ordnance falling from the sky, most people would run for cover. Not the... 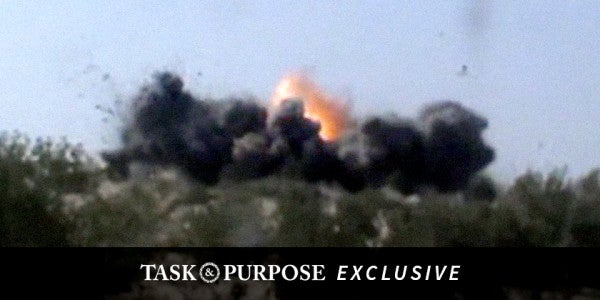 When confronted with thousands of pounds of ordnance falling from the sky, most people would run for cover. Not the person who filmed this video. Instead, he simply stands there as the bombs fall and jets scream overhead.

This is what it’s like to be on the receiving end of what was purportedly an Egyptian airstrike, as seen from the perspective of an ISIS-affiliated jihadist in the Sinai Peninsula.

The video comes from a thumb drive found in a Syrian village that was wrested from ISIS control earlier this year following a protracted battle with Kurdish forces.

The thumb drive, which was recently acquired by Task & Purpose, contains a bundle of ISIS propaganda, including more than a dozen videos, many of them produced by the Amaq News Agency, a pro-ISIS media outlet.

The text in this particular video, written in Arabic, reads: “Random airstrikes from the Egyptian Air Force south of Sheikh Zuwaid in the north of Sinai. September 5, 2015.”

Located just a few miles from Egypt’s border with Gaza and Israel, Sheikh Zuwaid has been the scene of heavy fighting since Wilayati Sinai, a jihadi group loyal to the Islamic State, attacked the town in the summer of 2015.

The Egyptian army responded by launching a series of counteroffensives in the region, and rumors soon began circulating that it was launched in coordination with Israel, which both Egypt and Israel have denied.

Officially, Israel hasn’t conducted a strike in the Sinai since the Egypt-Israel Peace Treaty was signed in 1979. And the country isn’t part of the U.S.-led coalition bombing ISIS in Iraq and Syria.

In the following video, also found on the thumb drive, and purportedly filmed in the same area and around the time same as the previous video, ISIS militants appear to be showing off an unexploded rocket, which the text in the video claims was dropped by an Israeli jet.

The text reads: “This rocket was shot by an Israeli bomber with other rockets that didn’t explode on ISIS territory south of Sheikh Zuwaid. September 9 2015.”

The writing on the rocket is in Hebrew.