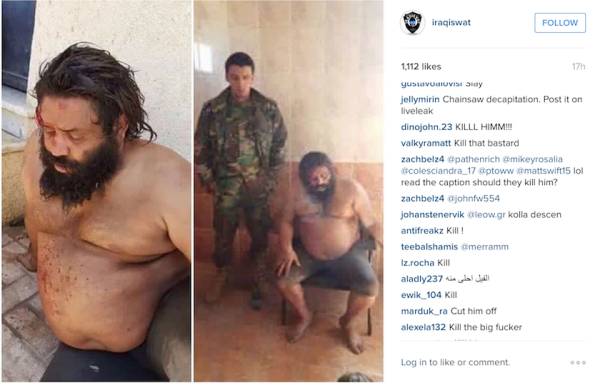 The unfiltered photo posted on March 28, 2016 shows a disheveled man being dragged through the dirt by members of an Iraqi militia. The caption begins: “We have arrested one of isis in south of Mosul.”

But the man isn’t being dragged to a prison cell to await trial. His fate will be decided much quicker than that. In fact, it will be decided immediately — by you, the follower. “You can vote For (kill him or let him go),” the caption continues in botched English. “We will post his fate after one houer.”

Hundreds of comments pour in immediately, many of them in English. The word “kill” pops up line after line. No mercy for this man. “On behalf of ALL red blooded americans,” someone writes, “give em the kill.”

Two hours later another photo is posted to the account with a simple caption: “Thanks for vote.” It’s a selfie taken by a member of the militia. Behind him the man from the previous photo lies face down on a concrete platform in a pool of blood.

This is @iraqiswat, the Instagram account of what appears to be an Iranian-backed Shia militia currently operating in Iraq.

A quick scroll through the group’s feed reveals a running catalogue of life on the front line in the war against ISIS. There are countless videos of gun battles, triumphant group photos among the wreckage of captured towns, ISIS-bashing memes, hero shots of Abo Azrael (aka the “Iraqi Rambo”), and tributes to the fallen. There’s also the occasional diatribe, including one recent rant imploring American commenters to stop “trash talking” Iraqi troops.

But the most popular posts are consistently the before/after photographs of men who were apparently tried, convicted, and sentenced to death by some of the account's nearly 75K followers. While Instagram states in the “community guidelines” section of its website that sharing “graphic images for sadistic pleasure or to glorify violence is never allowed,” it states elsewhere that the company “does not have any obligation to prescreen” content. Thus, many of the photos remain on the account before enough complaints force Instagram to take them down.

At a time when combatants on all sides of the conflict are using social media to rally support and undermine their foes, trial by Instagram adds another, more troubling dimension to the mix. It transcends the digital sphere, giving people around the world an opportunity to play — or at least feel like they’re playing — a direct role in a war being waged in the remote villages and desert plains of the Middle East.

In theory, a guy on the toilet in Omaha, Nebraska, could emerge from the bathroom with the blood of some 18-year-old Syrian on his hands.

How can anyone be certain that the men being summarily executed in these photos are actually ISIS fighters? They can’t. But it doesn’t matter, because Instagram isn’t a courthouse and these aren’t actual trials. It’s a game. And in this game there’s always only one outcome: “kill.”