ISIS Twitter Terrorists Get Beat Down By Anonymous Keyboard Warriors

On Wednesday, Anonymous took responsibility for shutting down roughly 800 Twitter accounts, a dozen Facebook pages, and a host of... 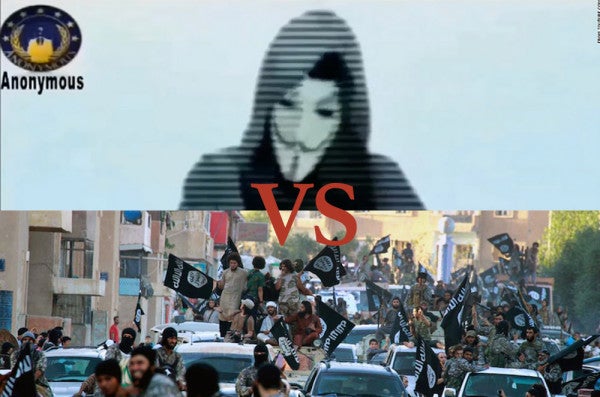 On Wednesday, Anonymous took responsibility for shutting down roughly 800 Twitter accounts, a dozen Facebook pages, and a host of email addresses, all of which were linked to ISIS supporters. The Internet-based hacker group has issued a straight up and down challenge to ISIS. And, the crazy part? They’re backing it up.

Last month, Anonymous declared war on ISIS in an animated video in the wake of the Jan. 7 Charlie Hebdo attacks when gunmen affiliated with Islamic extremists attacked the French satirical publication, killing 12. Speaking directly at ISIS militants, the animated video warned: “You will be treated like a virus, and we are the cure. We own the Internet now.”

The warning was referring to ISIS’ digital fear campaign, in which individuals claiming to be affiliated with the group have taken to hacking high-profile, social media accounts — most recently, the group hacked the Military Spouses of Strength Twitter account Tuesday morning — and posting vague and foreboding messages on Twitter feeds and Facebook walls, often ending with something particularly creepy like “You think you're safe but the [Islamic State] is already here!”

Personally, I imagine this battle being narrated by Christian Bale from “The Dark Knight,” but with less throat-talking. And like Batman, Anonymous hasn’t always had the best reputation, but that’s where the similarity stops. To be clear, they’re not good guys — just days before the news broke that Anonymous hacked the social media feeds of ISIS supporters, the group also claimed responsibility for hacking the web page of the European Parliament President Martin Schulz. They are computer hackers after all. They do break the law, and it’s not always to fight evil-doers.

What makes this Anonymous-ISIS war remarkable as well as highly entertaining is that on one side of the fence you have a group of quasi-Internet anti-heroes, with no discernible structure or hierarchy, waging a digital crusade against members of an equally fractured Islamic cyber caliphate that may only be associated with the Islamic State in the sense that it ends its posts with #ISIS.

This is a legitimate flame war. An epic battle of two titanic Internet trolls. I have no idea if anything good will come of it; maybe ISIS will get some more bad press, or see a loss of stature among its recruitment base, but it’s unlikely the online spat will have lasting effects. Anonymous can declare war all it wants, but until it starts sending in strike bombers, special operations forces, and taking key terrain, they remain all tweet and no talon.