It could be years, maybe even decades, before the full details of the U.S. special operations mission in Syria comes... 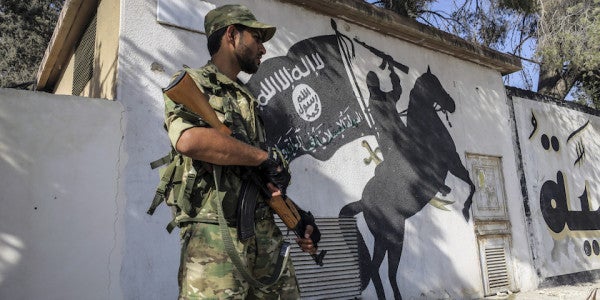 It could be years, maybe even decades, before the full details of the U.S. special operations mission in Syria comes to light.

Until then, they’ll continue to emerge only in bits and pieces — in occasional fragments that surface on the internet with little or no context, as they did on Sept 16, when a video purportedly showing a convoy of American operators leaving a town in northern Syria after a confrontation with local rebels began circulating online.

According to Reuters, the incident involved between five and six American operators, and took place in the border town of al-Rai. The Americans were apparently there supporting Turkish-backed rebels battling the Islamic State as part of an operation called Euphrates Shield, which was launched last month to push ISIS from the border.

But it was a group affiliated with the U.S.-backed Free Syrian Army, and not members of ISIS, who apparently drove the Americans away.

In the video, tanks (which appear Russian-made) and pickup trucks roll down a crowded dirt road. In the back of a few of the trucks, Caucasian men sporting helmets and body armor in the fashion of Western commandos stand or sit behind machine guns. Sitting shotgun in one truck, a commando casually throws up a “shaka” sign for the camera. The footage is bookended by footage of armed rebels chanting anti-American slogans.

At this point, it’s impossible to say what exactly drove the commandos out of the village, but a senior rebel source told Reuters that it was the protests that did it. According to the GlobalPost, threats of violence against the Americans can be heard in the video, and one of the protesters shouts, “We won’t accept any American here. We’re Muslims, not infidels.”

While the Syrian rebels may have succeeded in driving the Americans out of al-Rai, it’s important to note that they didn’t act on their threats. In the video, the chants give way to an almost ghostly silence when the commandos pass by, as if that portion was spliced in between the footage of the rebels chanting to create the illusion that the Americans were retreating, rather than simply driving away.

Multiple sources, including the Pentagon and the Turkish military, confirmed to Reuters that U.S. forces were operating in the area at the time the incident reportedly occurred. The Wall Street Journal reports that 40 special operations soldiers are currently deployed to northern Syria to help Turkish government forces.