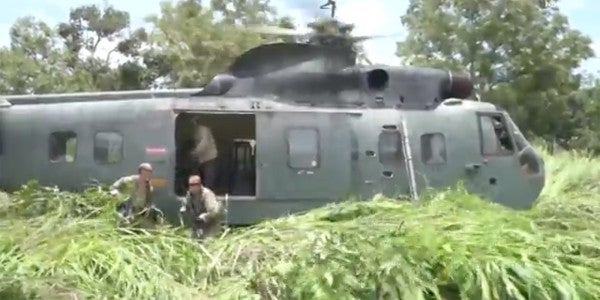 Right now, American operators are dropping onto LZs in central Africa, following Ugandan patrols through machete-resistant jungle brush, to find and capture one of the most wanted men on earth: militia leader Joseph Kony.

But as NBC News’ Mac William Bishop reports this week, the mission isn’t going great — it’s been a U.S. priority since 2011 — and there are rumblings that a new administration in Washington could draw down the effort and use the American Green Berets elsewhere.

In an engrossing, nearly 3,000-word dispatch — with ample video of the ground effort — Bishop, a seasoned war correspondent and former Marine infantryman, describes how the tip of America’s spear is as sharp as ever… but its deployment to a vast, fractious swath of the African bush is fraught with political and logistical difficulties:

The area of operations is the size of California, with about 80 military personnel and several dozen support personnel tasked with finding around 150 fighters with Kony's Lord's Resistance Army, operating across portions of four countries in some of the world's most inaccessible terrain.

“You're looking for a needle in about a million haystacks,” said Lt. Col. Cecil Marson, who commanded the operation's headquarters in Uganda until last spring. “You have to be judicious with your resources, but very aggressive.”

Kony has been a shadowy boogeyman of African anarchy for three decades. Founder of the so-called Lord’s Resistance Army, the charismatic guerrilla leader and self-professed Christian prophet is believed to be responsible for thousands of brutal killings and numerous village-razings, largely perpetrated by child soldiers his “army” abducted and trained on the fly. His force relies on black-market poaching and smuggling for money, helping to perpetuate an illegal ivory trade in which an elephant’s horn “sells for as much as $70,000,” Bishop reports.

Related: In Hunt For Warlord Joseph Kony, US Military Turns To Unsavory Partners»

Kony gained prominence as a baddie with the viral breakout video “Kony 2012,” an engrossing 29-minute chronicling of his bad deeds and their deleterious effects on humanity. The dynamic video, produced by nonprofit Invisible Children, galvanized U.S. support for anti-Kony operations, particularly among evangelicals who saw the mission as a religious and moral one.

Invisible Children was widely criticized for playing loose with the facts in its video, however, and its narrator, group cofounder Jason Russell, had a nasty public breakdown from stress associated with the video. By 2015, Kony fervor had evaporated on the internet and Invisible Children was planning to shut down operations.

In the meantime, U.S. forces, which had surreptitiously sought Kony since 2008, began a coordinated operation in 2011 called Observant Compass. Special operations forces from U.S. Africa Command hooked up with Ugandan troops to interdict Kony and disrupt LRA operations. Kony’s force was whittled down from some 3,000 troops to about 350. The U.S. has also trained and equipped local forces, as well as worked on civil affairs projects for local residents and incoming refugees.

But inertia has set in, and last October outgoing President Obama renewed the op for only six months, as opposed to the usual year, “in order to give the incoming administration flexibility in deciding its future.” The Trump administration now must decide whether the Africa operation is worth the cost in time and personnel.

One complication is that if the U.S. pulls its troops from the hunt for Kony, the effort could end up being privatized. Invisible Children, with help from a Texas hedge fund, has taken over a network of 36 African radio stations and is using them to gain intelligence on LRA ground movements. That Texas fund has also hired the controversial South African founder of the now-defunct Executive Outcomes private military company to train Ugandan troops in the hunt. If the U.S. withdraws now, the hunt for Kony could become a bloody colonial free-for-all.

As Bishop reports, there are also growing numbers of refugees who have clustered in areas where U.S.-led troops have established security — meaning a human crisis could grow out of control if American forces pull back and battle lines shift amid factional fighting.

What results is a troubling picture of how the best trigger-pullers in the world’s most powerful military still can’t “fix” a complex security situation in the shadowy gaps between well-governed countries. But if the U.S. pulls out, Kony lives on — along with the growing cacophony of hedgies, missionaries, and military contractors who’ve made him their mission. Will the U.S. remain on the overseas-savior track in central Africa, or move on? The operators wait for their next orders. The choice lies with the White House.