Report: SOCOM Has More Troops In Africa Than Anywhere Except The Middle East

There are now more U.S. Special Operations Command personnel deployed to Africa than anywhere outside the Middle East. That's just... 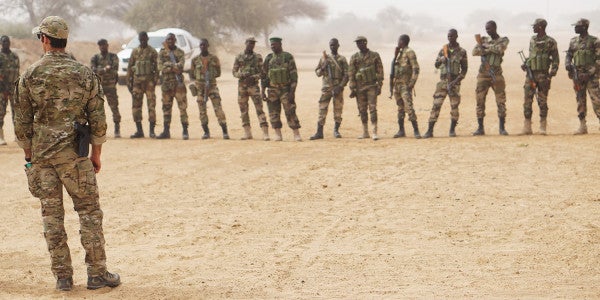 There are now more U.S. Special Operations Command personnel deployed to Africa than anywhere outside the Middle East. That's just one revelation from a newly unearthed 2016 internal military report that paints Africa as a possible future source of instability greater than “the threat that the United States currently faces from conflict in Afghanistan, Iraq, and Syria.”

Nearly one-fifth of U.S. Special Operations Command personnel deployed overseas are on missions in Africa, running almost a hundred active missions a day in 20 countries, according to documents and data obtained through a Freedom of Information Act request by Vice News's Nick Turse. Those figures represent a 17-fold increase over the share of SOCOM deployments to Africa a decade ago.

The figures come from the end of the Obama administration, but the newly minted Trump administration shows no signs of slowing U.S. interventions in Africa. Recent domestic news headlines have highlighted the military’s rising operational tempo on the continent, including U.S. troop movements to the Horn of Africa, operations to find notorious Lord’s Resistance Army leader Joseph Kony, and American casualties in the fight against al Shabab, an al Qaeda-aligned jihadi group based in East Africa.

“The United States is not at war in Africa, but our African partners are,” Brig. Gen. Donald Bolduc, the head of Africa Special Operations Command (SOCAFRICA), wrote in the October 2016 guidance. Bolduc’s report “paints a picture of reality on the ground in Africa today and what it could be 30 years from now,” Turse explains:

That picture is bleak.

“Africa’s challenges could create a threat that surpasses the threat that the United States currently faces from conflict in Afghanistan, Iraq, and Syria,” Bolduc warned. He went on to cite a laundry list of challenges with which he and his personnel must contend: ever-expanding illicit networks, terrorist safe havens, attempts to subvert government authority, a steady stream of new recruits and resources.

Terror attacks have multiplied throughout Africa over the past decade, and violent extremist organizations across the continent “have been some of the most lethal on the planet,” Bolduc writes. “We believe the situation in Africa will get worse without our assistance.”

Navy SEALs, Green Berets, and other specops personnel have a major role to play in that assistance. “The problem we assist AFRICOM in solving is countering violent extremism in order to provide time for African partners to expand good governance and self-secure,” Bolduc writes. “This is by no means an easy task due to the extent of destabilization throughout Africa.”

If the trend lines continue and more U.S. troops — conventional or otherwise — deploy to Africa, FOIAs like Turse’s may be a key conduit of information for the American public, since the White House and Pentagon in March decided to stop disclosing major troop movements publicly.

Even with reports like these, fresher data remains hard to come by. Vice News “reached out to SOCAFRICA and U.S. Africa Command for clarification” on the troop numbers in Bolduc’s guidance, Turse writes.

“[E]mail return receipts show an AFRICOM spokesperson ‘read’ three such requests,” he writes, “but the command did not offer a reply.”