ISIS fighters have closed the streets around Mosul's Grand al-Nuri Mosque, residents said, apparently in preparation for a final showdown... 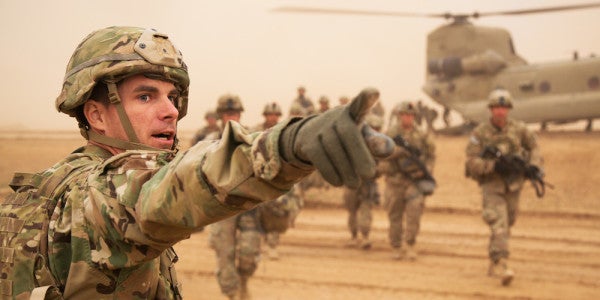 ISIS fighters have closed the streets around Mosul's Grand al-Nuri Mosque, residents said, apparently in preparation for a final showdown in the battle against Iraqi forces over their last major stronghold in the country.

Dozens of fighters were seen by residents taking up positions in the past 48 hours around the medieval mosque, the site where ISIS leader Abu Bakr al-Baghdadi declared a caliphate in July 2014.

Remaining #ISIS in W. #Mosul #Iraq hold less than 10 sq. km. This will arguably be some of the toughest fighting the #ISF will face.

The black flag of ISIS has been flying from the mosque since the fighters captured Mosul and seized swathes of Iraq and Syria in the summer of 2014.

“Daesh's fighters know that the mosque is the most important target and they are preparing for a major battle there,” said Hisham al-Hashemi, who advises several Middle East governments, including Iraq's, on ISIS, using an Arabic acronym for the group.

Military sources said the move by ISIS fighters was aimed at preventing any infiltration by advancing Iraqi forces, who are closing in on the remaining pockets of territory held by the armed group.

The fall of the city would, in effect, mark the end of the Iraqi half of the self-styled caliphate. Meanwhile in Syria, Kurdish forces backed by U.S. air raids are besieging ISIS forces in the city of Raqqa, the fighters' de facto capital in that country.

Up to 200,000 people still live in harrowing conditions behind ISIS lines in Mosul, running low on food, water and medicine.

Civilians fleeing the fighting told Al Jazeera about the terrible conditions they have been living in.

Tired and panicked, they described starving conditions with limited access to water

A fleeing man said that during the Muslim fasting month of Ramadan, which is currently under way, he has been surviving with flour and water.

An older woman said that they were being treated as prisoners and had no food or water.

Iraqi forces launched a major U.S.-backed operation to retake Mosul in October last year, fighting their way to the city and retaking its eastern side before setting their sights on its smaller but more densely populated west.

The battle has taken a heavy toll on civilians, pushing hundreds of thousands to flee, while hundreds more have been killed or wounded.

#CJTFOIR has supported the #ISF with 21 strikes this past week, taking out mortars, heavy machine guns, VBIEDs and VBIED factories

The Grand al-Nuri Mosque has become a symbolic focus of the campaign with Iraqi commanders privately saying they hope to capture it during Ramadan.

But a battle in or near the mosque would put the building and its famed leaning minaret at risk, experts say.

The minaret, several meters off the perpendicular and standing on humid soil, is particularly vulnerable as it has not been renovated since 1970. Its tilt gave the landmark its popular name — al-Hadba, or the hunchback.

The Mosul offensive has taken much more time than expected as ISIL is fighting in the middle of civilians and using them as human shields.

Over the past few days, fighters ordered dozens of families living in the Zanjili district to move into the Old City to prevent them from escaping towards the Iraqi forces trying to advance from the northern side, a resident said.

Government forces have been dropping leaflets over the districts telling families to flee, but the intensity of the fighting has prevented people from escaping.

ISIS is countering the offensive with suicide car and motorbike bombs, snipers, booby-traps and mortar fire.

About 700,000 people, or one-third of the pre-war city's population, have already fled seeking refuge either with friends and relatives or in camps.