America loves a hero sniper. Consider Chris Kyle, the veteran Navy SEAL who became the stuff of legend well before... 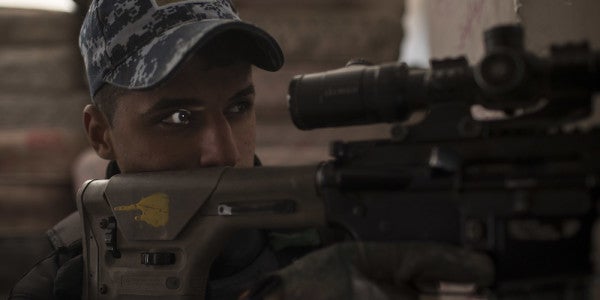 America loves a hero sniper. Consider Chris Kyle, the veteran Navy SEAL who became the stuff of legend well before publishing his 2012 autobiography “American Sniper,” with more than 160 kills confirmed by the Pentagon during his four tours in Iraq. Or Gary Gordon and Randy Shughart, the Delta Force snipers posthumously awarded the Medal of Honor for their bravery during the 1993 Battle of Mogadishu, actions immortalized in “Black Hawk Down.” Or Marine Corps Gunnery Sgt. Carlos Hathcock II, who established a Scout Sniper School at Quantico, Virginia, after returning home from the Vietnam War. Alone with his rifle, the sniper is the embodiment of the one-man army.

Now, Iraq has its own expert marksman to celebrate: Yousef Ali, a 20-year-old Iraqi federal policeman who, with the help of a Russian-made Dragunov sniper rifle, is helping Iraqi security forces and the U.S.-led coalition take back the city of Mosul inch by inch, block by block.

Since Western-backed forces began their advance on Mosul in earnest in February, six months after the initial military offensive by Iraqi forces, ISIS has put up fierce resistance with their own barrage of mortar shells and sniper fire — constant threats lurking behind burned-out houses and mountains of rubble. USA Today’s Igor Kossov embedded with Ali to get a first-hand look at the task facing the warfighters of the multinational coalition:

Through the small hole in the wall of an abandoned hotel, Ali saw the labyrinth of the Old City's narrow streets stretch before him.

Less than 300 yards away, the Islamic State, also known as ISIS, prepared for another sneak attack, surrounded by civilian human shields. “The (ISIS fighters) are out there,” said the 20-year-old Iraqi federal policeman, taking his eyes off the scope for a moment. “Just behind those buildings.”…

“Two or three days ago, (ISIS) set some fires to make a smokescreen, then some of them came at us with suicide belts,” Ali said. “I killed two of them.”

But that’s the beauty of the Kossov’s profile of Ali. The young Iraqi policeman is less a superhuman marksman and more a courageous young man doing his job — and following his training:

Ali said it had been his dream to become a sniper since he joined police basic training.

After 45 days of basics, he was accepted into sniper training, spending six months becoming acquainted with the specialization under Iraqi and Italian trainers in Baghdad and Fallujah. The training paid off when he was thrust into the Mosul offensive with his M-16 and Dragunov rifles, Ali said.

Of course, Ali maintains a friendly rivalry with his fellow snipers: After all, who doesn’t want to be the next Chris Kyle?

“We always hear everything that's going over the radio. So sometimes we'll say, 'Oh, I killed more (ISIS fighters) than you, you better try harder,'” he told USA Today. “But we all treat each other as brothers here.”