In 1991, the overwhelming success of night vision-equipped U.S. troops in the Gulf War inspired a brand new axiom of... 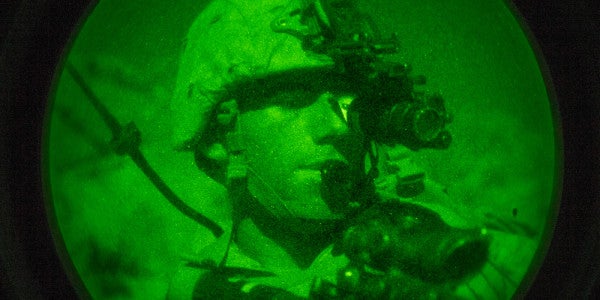 In 1991, the overwhelming success of night vision-equipped U.S. troops in the Gulf War inspired a brand new axiom of the modern American military: We own the night. But new ISIS propaganda video, released following the expulsion of the terror group from their last de facto stronghold in Raqqa, has a clear message for Western forces: Not anymore.

The six-minute video, “Snipers of the South – Wilāyat al-Janūb” published to social media on Nov. 10 shows an ISIS sniper and spotter using “a U.S. M4 with an unknown scope” and a $5,000 FLIR BHM thermal camera originally designed “to help maritime vessels see debris, rocks, other boats and landmarks in pitch-black conditions,” Army Times reports. Although U.S.-made military-grade night vision and thermal imaging gear are restricted export items under the Department of State’s jurisdiction, it is quite possible the equipment was liberated from Iraqi or U.S.-led coalition depots by ISIS militants in recent years — or simply purchased online and smuggled into Iraq and Syria by foreign-born fighters.

For years, militants' emerging night vision capabilities remained a negligible threat to the Department of Defense. Only a handful of Taliban and Al Qaeda were trained to use their few night-vision devices effectively in combat, as Adam Raymond reported for Task & Purpose in July, “nor did they fully grasp how much the U.S.’s night vision capability had improved, leaving them unaware that they were just as visible in the darkness as they were in daytime.”

But that advantage has evaporated in recent months. The ISIS video comes amid reports that Taliban insurgents belonging to an elite “Red Unit” outfitted with sophisticated night-vision equipment —described by the New York Times as “Star Wars-like headgear containing Russian-built night goggles” — slaughtered scores of Afghan police officers this month. Despite their past inexperience, Taliban fighters now appear to, as Raymond put it, “fully understand the power of night vision” like the foreign fighters who fill ISIS ranks in Iraq and Syria

Speaking to Task & Purpose correspondent Marty Skovlund in Kabul on Nov. 4, U.S. military leaders in Afghanistan insisted that Afghan National Defense and Security Forces “consistently” defeated the Taliban on a regular basis. But the “Red Unit” spree is a demoralizing blow to Afghan security forces that just weeks ago saw nearly an entire Afghan Army unit “wiped out” by militants using stolen U.S.-supplied Humvees loaded with explosives. “The Taliban are trying to capture the entire province,” one local Afghan official told the New York Times, “and they have modern weapons.”

With ISIS fully expelled from its urban strongholds of Raqqa and Mosul, it’s likely that Syrians and Iraqis who have endured years of horrors under the so-called caliphate are feeling a glimmer of hope. But with thousands of ISIS militants now scattered to the winds and planning the group’s next bloody resurgence, the Afghan experience with night-vision-equipped Taliban militants may portend a new era of ISIS terror that is silent and deadly — and can see in the dark.