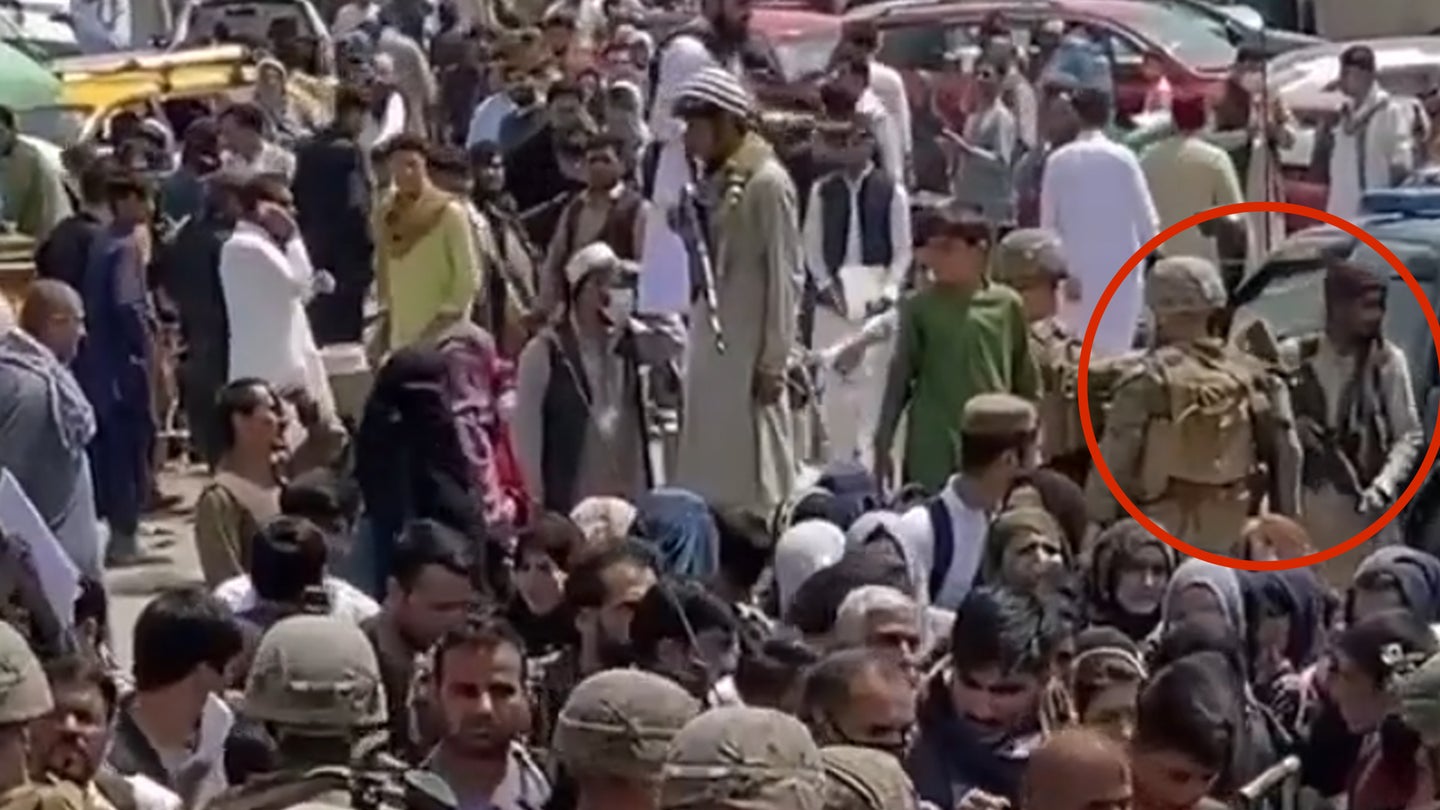 A recent video shared to Instagram appears to show U.S. Marines manning a checkpoint within arms reach of armed Taliban fighters outside of the Hamid Karzai International Airport in Kabul, Afghanistan. (Screenshot via Instagram).
SHARE

After two decades of war, American service members and Taliban militants have been standing within an arm’s length of one another outside the airport in Kabul, Afghanistan.

A short video clip posted to Instagram appears to show U.S. Marines standing just feet away from armed Taliban fighters at a checkpoint outside of the Hamid Karzai International Airport in the country’s capital, where droves of Afghans have gathered in recent weeks hoping to flee the country ahead of the militant group’s takeover.

The clip was first shared by the Instagram account maneuver_____up and appears to show U.S. Marines as they check identification badges at a checkpoint outside of the airport, all while the militants stand nearby, intermingled with, and at times looming over the crowd. It’s incredibly surreal.

As thousands of Afghans rush to flee the country, Taliban fighters have established roadblocks and checkpoints outside of the airport, and appear intent on keeping as many from leaving as possible. And, as Jeff Schogol recently noted, for those who are lucky enough to make it safely to the airport, their luck needs to hold long enough to find a gate that’s open, and then they still have to be able to get in.

While the Taliban has insisted that they’ve brought security to Kabul’s streets — despite evidence to the contrary — the presence of their armed fighters in a crowd of civilians hoping to flee their rule sends a threatening, and not-so-subtle message. Here’s how Jariko Denman, a former Army Ranger who is currently on the ground at Kabul airport, described the scene in a recent article for Coffee or Die Magazine: “Anyone who has ever been deployed would recognize HKIA’s entry control points: big barricades with multiple checkpoints. When you get to the last one, that’s Taliban. And then the Taliban kind of spit them out at us.”

The bizarre scene of Marines being in close proximity to Taliban fighters, but not in combat, has become “the norm” in recent days, according to a Marine on the ground.

For years, Marines and soldiers who deployed to Afghanistan fought against Taliban fighters who operated like ghosts, planting improvised explosive devices at night, or firing from long distances — often inaccurately, but in volume — before peeling off and fading away. It was rare to see one. Now they’re everywhere.

A post shared by CLOSE WITH AND DESTROY (@maneuver_____up)

Responses to the video on social media underscored just how strange, and discomforting, the scene is, with more than one stating simply: “Too close for comfort.”

There is a brief moment, right at the tail end of the short video, when two militants with AK-47s move through the crowd toward the Marines. While they don’t appear to aim their weapons, they change positions from carrying their rifles slung lazily over their shoulders and chests, to having a hand on the pistol grip. Though nothing happens on screen, it’s still a little… tense.

The U.S. military’s posture during the War in Afghanistan often prevented large groups of people from gathering so close to U.S. troops. And with the exception of close-quarters combat, or the odd “bodyguard” accompanying a village elder to a shura — you know, the guy who gave off very big “I’m going to be shooting at you in an hour” vibes — it’s hard to imagine Taliban fighters being so near to U.S. military personnel.

And that’s to say nothing of two decades of military operations and tactics which instilled every service member in Afghanistan with a little voice in the back of their heads that screamed “DISPERSION!” anytime they got within eight or 10 feet of someone else. For those not familiar, this was a patrolling technique that involved maintaining enough distance between each member of the patrol to ensure that if there was an explosion — whether it be from an improvised explosive device, a rocket-propelled grenade, suicide vest, or any of the other weapons that became mainstays of that war — the patrol would be spread out enough that the number of casualties might be reduced.

With that in mind, it’s difficult to look at the situation facing Marines in that video, with the crowd on a canalized city street, hemmed in by walls and parked cars, and armed men nearby, and not echo the concerns of previous commenters: Definitely too close for comfort.

But the potential for danger is only part of the challenge that U.S. troops still face overseas. There’s also the incredible burden and stress that comes with operating in a fluid and volatile environment. What happens if a fight breaks out in the crowd? What if Taliban fighters threaten civilians? What if they beat them? What if they open fire?

“It’s terrifying. It’s a nightmare scenario,” said Zachary Bell, a former Marine infantryman who deployed twice to Afghanistan with 1st Battalion, 6th Marine Regiment, first to Garmsir and then to Marjah as a squad leader in 2010.

“But to be in a scenario where you can’t engage and can’t help people who are defenseless, feet away from you,” said Bell, who runs the popular military social media page Veteran With a Sign. “It just feels dangerous on so many levels.”

“What if you were to see someone being mistreated by the Taliban? How do you react to that?” Bell continued. “Do you just stand there and watch? That’s a task and a burden of responsibility I don’t envy.”

Though U.S. troops have the inherent right of self defense, the rules of engagement depend on the situation and the mission at hand. It is unclear at this time what the ROEs are for service members assigned to provide security at the airport, and U.S. Central Command did not respond to requests for comment seeking clarity.

The video is yet another glimpse into the state of affairs in Kabul that has emerged since the Taliban seized control on Aug. 15. One recent video showed a U.S. Marine hoisting an Afghan baby over the walls of the airport as a throng of desperate people pushed in seeking safety. That same week images flooded the wires and the web of Taliban fighters operating openly in the city, parading down streets, and gathering in public squares. And then there was the tragic and horrifying footage that captured a rush of civilians as they made their way onto the tarmac at the airport, as they climbed atop and clung to the sides of a C-17.

“When I see all this stuff happening in real-time now — heartbroken would be an understatement,” Bell said. “Some of it seems like the Afghanistan I remember. Other parts seem like a world I barely understand.”