Spring reminds most people of rebirth. It reminds me of death

In 2010 my rifle squad was finishing a patrol through southern Marjah, Afghanistan. With the temperature rising that May, sweat... 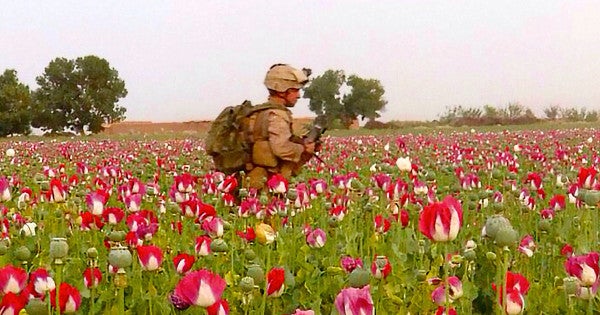 In 2010 my rifle squad was finishing a patrol through southern Marjah, Afghanistan. With the temperature rising that May, sweat covered us as we passed through fully-bloomed poppy fields ready for harvest.

It had been quiet for most of the day so we were heading back to base. But after passing our final checkpoint, I saw something out of the corner of my eye. It was the earth exploding in front of us.

“Contact left!” I shouted to my squad as I raised my rifle and fired back at the Taliban ambushers, attempting to suppress their fire. Others bounded across the open field toward them.

It was over within minutes. By the time we got to their position, all that was left was an abandoned shooting platform. Like ghosts, the Taliban was gone.

My time in Afghanistan is long behind me now, but in spring I always tend to see, hear, and smell my war, and I fear I always will. People always ask me what things remind me of war. Is it loud noises? Lights?

Paradoxically, it is the radiant light of a spring day glistening on my skin. It releases feelings of regret and remorse entangled in my soul that only find respite in shadows hidden from the sun’s golden rays.

I call it the remembering.

Back home in Tennessee during April and May, the warm air rises as it melts away the morning dew that hangs from leaves of grass. Sometimes it makes me think back to the dew on opium poppies. The buzzing of the bees is often mistaken for the whiz and crack of a Kalashnikov rifle, and the soft pelting from a splash of dirt as it inches closer brings me back to those days when 7.62 millimeter rounds skipped at my feet like rocks over a pond.

I see helicopters taking off with my wounded friends when I feel a warm breeze blowing through weeds. And I see tracer fire when fireflies begin to appear as the sun starts to die down.

Spring and summer was the fighting season in Afghanistan. Now, I constantly fight my own mind from taking me back there.

Later that spring, patrolling near Marjah, we were tasked with seeking out a village elder so we could try to strengthen ties, pay for damage done to civilians during the fight to retake the city from the Taliban, and gather information on enemy movement.

Intelligence reporting indicated that enemy fighters were using the main road that ran parallel to the village. Since the threat from improvised explosive devices was high, we kept off the road and traversed through harvested, now-barren poppy fields, separated by irrigation canals.

Leaving base in early afternoon, we bounded across one open area to the next. Some of the canals were narrow enough to jump across, while others were too wide, and the only option was to cross the muddy water as quickly as possible.

Walking cautiously and scanning for signs of the enemy, I began to notice a change in the scenery from cracked desert earth to lush green grass as we traveled north. It appeared from nowhere like a mirage. The grass felt soft on my hands as I ran my fingers through the leaves. For a moment, it seemed like I was back home, running barefoot with my wife and daughter in our backyard, playing on our swing set.

When we arrived at the village, our interpreter asked the local farmers to bring the elder to us as we consolidated near a building. My squad leader called the team leaders to him, and smiled as he said, “smoke em’ if you got ’em.”

Sitting in that emerald paradise, smoking, I was again transported back home, barbecuing with family and friends, remembering the way it felt to have my wife’s hand in mine and my daughter’s head on my chest as we stared up at the stars.

We smoked the cigarettes to the filter band. Throwing my butt to the ground, I took my fire team and some of the Afghan soldiers to speak with two farmers working in a nearby field.

I squatted as I talked to the young men. Our conversation echoed previous interactions that always yielded little to no information. Then just as it seemed a rapport was developing, I asked them about Taliban fighters in the area. They didn’t need to answer.

Across the field, hidden beneath the foliage of the tree line covering the canal, the ghosts again emerged and opened fire.

“Contact Front!” I roared as I fired 40 mm grenades at the enemy fighters. I reloaded my M203 grenade launcher at the cyclic rate as I pushed the locals behind me and my Marines, shielding them from the danger.

My squad leader and I were a few hundred meters apart, away from the safety of the building. We could see about a dozen Taliban fighters moving through the tree line trying to bait us into crossing the open area and trigger the ambush they were trying to complete.

Reloading my M203, I fired a few more rounds, forcing the Taliban fighters’ heads down as shrapnel and bullets rained down on them. One farmer, overcome with fear, stumbled and I put my hand on his back as I pushed him to safety.

We regrouped on the opposite side of the building, redistributed ammo, and made a hasty plan to skirt the road as close as possible and return to base. We left, bounding from one piece of cover to the next as we ran back, returning in a third of the time it took to get there.

Back in relative safety, we talked over what had happened and refilled our ammo and supplies. Our next patrol, this time at night, would come a few hours later. My squad leader and I sat in silence, smoking, as we began to calm and catch our breath.

Then he broke the silence. “It’s going to be a long summer,” he said.

That was almost a decade ago.

Although I’ve had many challenges since then, my life now has never been better, and I consider myself truly blessed. But every April through July I still feel off balance, finding myself in a personal purgatory of arrested development.

The anniversaries start slowly, but then it begins to build into a tidal wave that peaks on Memorial Day, and carries me into the Fourth of July.

Now more than ever, I seek refuge from the coming storm. I’m slowly learning how I can live a life that recognizes all the friends I have lost, in a way that is reverent of their memory and honors their sacrifice.

I have tried everything to avoid this time of year, but this time I am taking a different approach. The remembering will continue, but perhaps, I can try to create new memories that I can fall back on.

Instead of secluding myself from the world, I will spend this spring and summer with my family and friends, remembering that it’s okay to enjoy this gift of life. That’s what my fallen brothers would probably want.

But still, for me, it will always be a long summer.