"Leaders need to be asking those questions, and they are, because they now know people are number one." 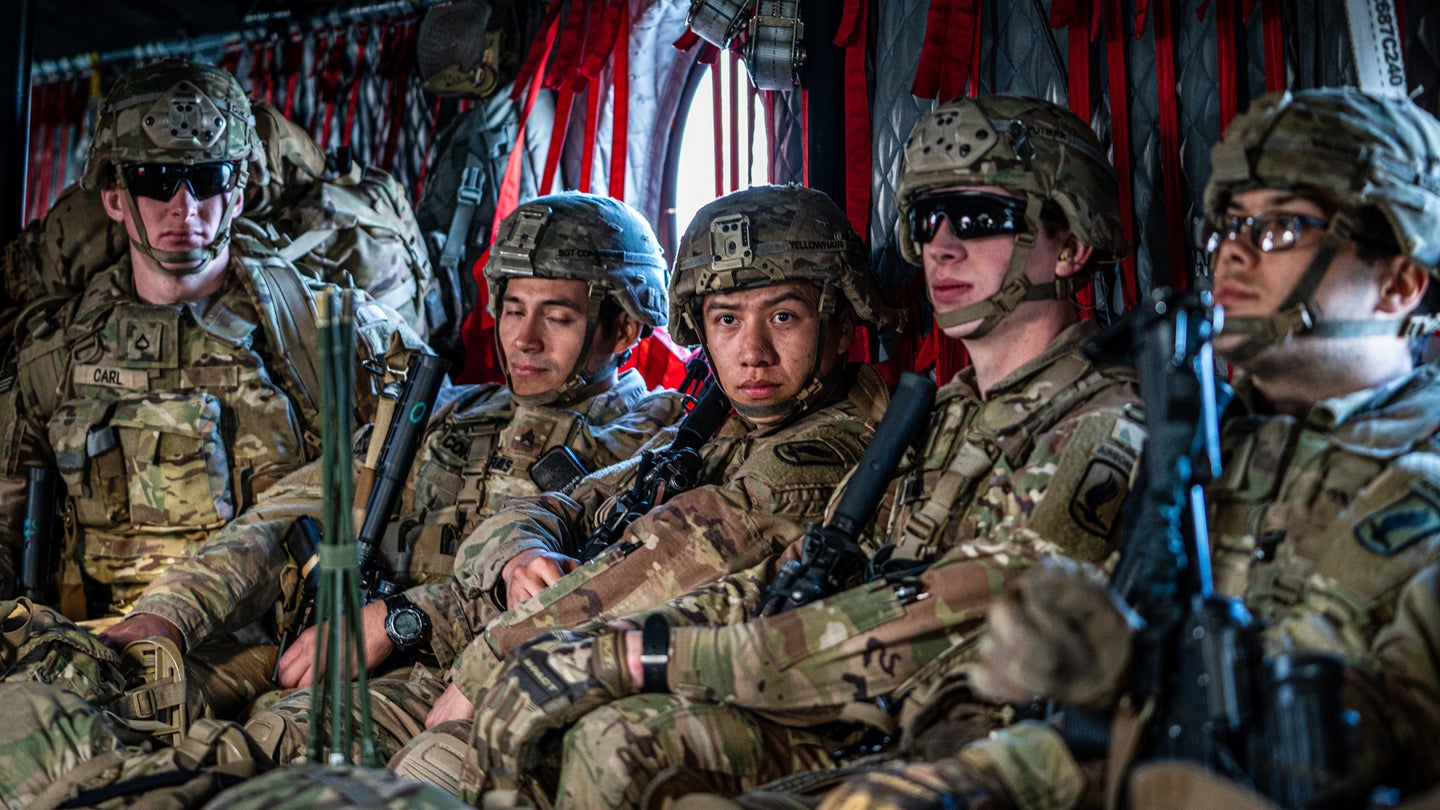 Paratroopers of the 173rd Airborne Brigade take a ride in a CH-47 Chinook from B Co, 1-214th General Support Aviation Battalion during air assault training in the Republic of Cyprus on Jan. 14, 2020.
SHARE

The year started — literally, on Jan. 1 — with a rapid deployment to the Middle East. That was followed by the novel coronavirus (COVID-19) outbreak which forced the Army to adjust to a new normal. In April, the service was rocked by the disappearance and death of Spc. Vanessa Guillén. In May, the death of George Floyd, a Black man who died at the hands of Minneapolis police officers, brought a renewed intensity to the issue of racial division throughout the entire country — and the Army was no exception. In June, the Army found itself in hot water after National Guard helicopters flew low over people protesting Floyd’s death in Washington, D.C., the official investigation of which still hasn’t been released.

In the fall, the service found itself responding to a different kind of tragedy as wildfires spread throughout California. And just recently, the Army has been forced to take a long hard look at itself as an outside panel pointed out glaring flaws at Fort Hood, one of its largest bases.

It’s been a long year, full of challenges. But to Army Vice Chief of Staff Gen. Joseph Martin — who spoke with Task & Purpose alongside Undersecretary of the Army James McPherson earlier this month — the biggest issue for the service is an ongoing effort to overhaul Army culture to focus on putting the welfare of soldiers and families ahead of all else.

“It’s the whole idea that this group is a cohesive team that all have relationships built on trust, mutual respect, and empathy, and that’s easy to say but it’s harder to do when you ask a million-person organization to buy into that and do it,” Martin said. Indeed it is.

In October at the Association of the U.S. Army’s annual conference, Army Secretary Ryan McCarthy announced that the service was officially putting people ahead of readiness and modernization in their top priorities — something that seems like bureaucratic nonsense but actually signals a significant change in thinking for a service that has been relentlessly focused on training and modernizing the force.

To start, McCarthy announced that the Army would be cutting down on combat training center rotations to address an “unsustainable operational tempo (OPTEMPO)” stemming from the service’s focus on readiness. “As we took a closer look at ourselves over these past couple of months, we understand that the last 19 years of combat operations and global deterrence has come at a cost,” McCarthy said in his opening remarks at AUSA.

But changing that mindset won’t be easy.

“The leaders that are leading our formations right now have been focusing for the past two decades on building formations to deploy them and, since 2015, building the readiness of our formation so we’re as ready as possible, so we can fight tonight,” Martin explained. “It’s going to take time to say no, that’s not what I said, this is what you need to do … And over time, I think the problem will resolve itself.”

As part of an effort to move the force closer to that point, the Army announced “Project Inclusion” earlier this year to help “improve diversity, equity and inclusion across the force and build cohesive teams.” Within that initiative, leaders were encouraged to hold listening sessions to create an open dialogue about what problems people may be facing.

Martin said that when he held those listening sessions with people in his own office, he learned challenges they’d faced in the past — or were still facing — that he never would have known if he’d never asked.

“I would like to think we have a very good climate in this office because everybody’s happy, they love their jobs, they tell me this when I sit down and talk to them,” Martin said. “They talk to me collectively about it. And so you think that they had a wonderful life on the way to wherever they’re at right now. So you have a simple conversation about, ‘This is my life story, this is what I experienced, now tell me yours.’ I was blown away with some of the adversity that teammates on my team who seem to be — I just assumed that they had a wonderful career or a wonderful life en route to this time when we served together — that they had some things that they were, or still are, working their way through that I had no idea because we never had that discussion.”

McPherson said that one of the most striking things he heard during his conversations was that a Black Army colonel took extra steps when he got behind the wheel of a car to ensure his safety if he was pulled over by law enforcement.

“He shared with me that even as an older African American, as an O-6, wherever he gets in his car to drive anywhere, he hangs his uniform in the back hanger. Why? Because if he gets pulled over, he knows that a law enforcement officer is approaching his car and probably doesn’t have his hand on his gun because he sees that uniform,” McPherson explained. “It resonated with me, because I could now understand what the Black community is saying to us across this country.”

Ultimately, the two leaders both pointed back to the mantra that has defined the Army’s focus in 2020: This is My Squad, an initiative meant to form a bond of understanding and empathy between soldiers and leaders throughout the force.

Moving into the new year, it doesn’t appear that’s going to change. As McPherson said, re-focusing leadership isn’t something that will change overnight — it will no doubt take continued commitment from Army leaders to stay engaged and ask questions they may not have prioritized in the past.

“It requires that leadership at every level, starting here, going down to [U.S. Forces Command], down to the corps, down to the divisions, and on below — for every leader in that chain of command to turn their focus back on this, and ensure, ‘Is my SHARP program working at my company level? Is my SHARP program working at battalion, brigade?'” McPherson said. “Leaders need to be asking those questions, and they are, because they now know people are number one.”

Featured photo: Paratroopers of the 173rd Airborne Brigade take a ride in a CH-47 Chinook from B Co, 1-214th General Support Aviation Battalion during air assault training in the Republic of Cyprus on Jan. 14, 2020. (U.S. Army/Maj. Robert Fellingham)