And you thought the Indian navy's screen-door-on-a-submarine moment was bad: Apparently, the Spanish navy's brand new diesel-electric S-80 Plus submarines... 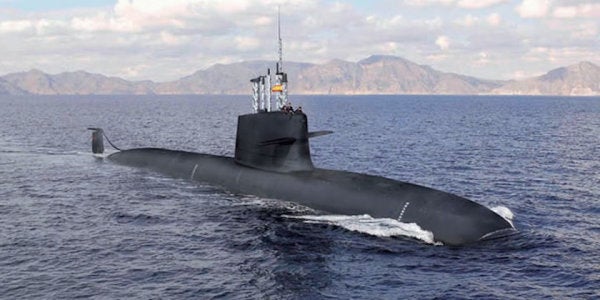 And you thought the Indian navy's screen-door-on-a-submarine moment was bad: Apparently, the Spanish navy's brand new diesel-electric S-80 Plus submarines are too girthy for their berthings. And in this case, size really does matter:

El País reports Spain's new submarine project, the S-80, has a new problem (the first, very expensive, one was that it didn't float). Now it doesn't fit in the submarine pens at the Cartagena naval base.https://t.co/hRTmfSVOKd pic.twitter.com/r3z5GWaiwD

The issues facing the Spanish navy's cocksure bubbleheads include the sub's girth, weight and length. Here's a run-down of the problem according to the Spanish-language newspaper El Pais (emphasis added):

The problems surrounding the bizarre history of the new submarine of the Spanish Navy have not yet been fully resolved.First was the excessive weight of the ship, which prevented it from floating and forced an increase in its length by 10 meters and its displacement by 800 tons.Now the problem is that, with its new dimensions, the S-80 Plus does not fit in the docking pits of the naval base of Cartagena (Murcia), which will force the Ministry of Defense to dredge and expand the docks.The cost of the necessary infrastructure works to adapt the base to the new submersible, including the expansion of the pits, amounts to 16 million euros.

Yikes! We're pretty sure our friends at The War Zone are in on the joke, too:

The issue is that the S-80 Plus is larger than manufacturer Navantia had said it would be when the Spanish government approved construction of four boats all the way back in 2003. The program to develop a new submarine for Spain’s Navy dates back to before the end of the Cold War, at which time it was a joint Franco-Spanish effort.

Luckily, the Spanish military plans on making it, uh, work. “There have been deficiencies in the project,” Spanish Defense Minister Margarita Robles said of the S-80 in a recent interview with the BBC. “They are already corrected and that the project is absolutely viable.”

Sometimes, you just need a magnum sheath for your big ol' sub.