The 2018 race in Virginia's 5th Congressional District has taken an unusual turn, leading some voters to ask: What is... 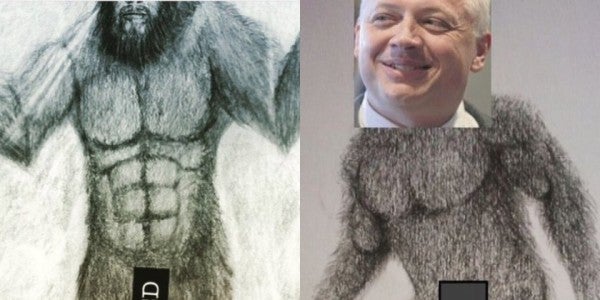 “My opponent Denver Riggleman, running mate of Corey Stewart, was caught on camera campaigning with a white supremacist. Now he has been exposed as a devotee of Bigfoot erotica. This is not what we need on Capitol Hill,” Cockburn wrote on Twitter Sunday.

She also tweeted two screenshots from Riggleman's Instagram account showing images of a naked Sasquatch with a “censored” bar over its genitalia. Mashable reports Riggleman's account is currently set to private as “Bigfoot” continues to be a trending topic on social media Monday.

My opponent Denver Riggleman, running mate of Corey Stewart, was caught on camera campaigning with a white supremacist. Now he has been exposed as a devotee of Bigfoot erotica. This is not what we need on Capitol Hill. pic.twitter.com/0eBvxFd6sG

According to the Washington Post, Riggleman is a craft distillery owner and former Air Force intelligence officer who was selected last month to replace Rep. Thomas Garrett on the November ballot after Garrett revealed he was an alcoholic and abruptly ended his re-election campaign. Riggleman previously ran for Governor in 2017, but has never held public office.

“You've never seen a fighter like Denver Riggleman,” he said in a speech after accepting the nomination in June, according to the Post. “I've been through hell, and I've got hell to give!”

Last week, the Cook Political Report said Riggleman had an “offbeat sense of humor,” such as a Facebook page claiming he is the author of a book called “The Mating Habits Of Bigfoot And Why Women Want Him.” The screenshots from Riggleman's Instagram included references to the same title.

Riggleman told the Daily Progress that the images and the book are not actual “Bigfoot erotica,” but rather a joke his military friends played on him. He described Cockburn's tweets about it as “absurd.”

BuzzFeed reports that Riggleman is, however, the co-author of a real book called Bigfoot Exterminators Inc. The Partially Cautionary, Mostly True Tale of Monster Hunt 2006. A source close to the candidate told the Daily Progress it was about people who look for Sasquatch, and “assuredly not” a sexual story.

As for the allegations that he supports white supremacists, BuzzFeed points out that congressional candidates don't actually have “running mates” but Stewart, a Republican candidate for U.S. Senate in Virginia, has been called “the Alt-Right's Favorite Candidate,” and criticized for saying the Civil War was not about slavery.

Riggleman distanced himself from white nationalists, the alt-right and the KKK in an op-ed last week saying “any white supremacists intending to come back to Charlottesville… are not welcome.”

Meanwhile, according to the Daily Progress, Cockburn is also facing scrutiny over a book she co-authored about a very different subject: “Dangerous Liaison: The Inside Story of the U.S.-Israeli Covert Relationship.” The Republican Party of Virginia has accused Cockburn, a journalist and first-time candidate, of anti-Semitism in the 1991 book.

The Post reports the 5th Congressional District is typically won by Republicans, but the race is one of nearly 100 being targeted by Democrats seeking to take control of the House in midterm elections.