I'll be totally honest, I love this. 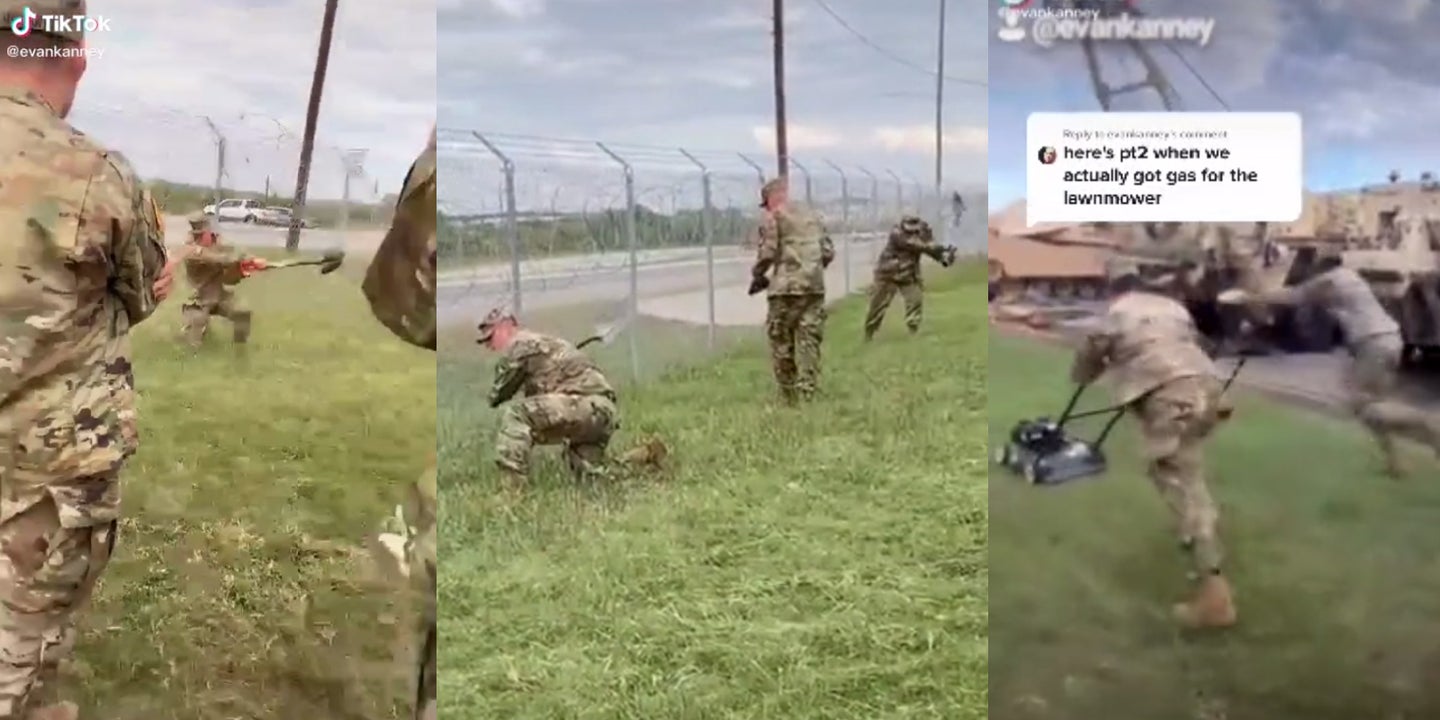 Ah yes, active duty life. The clarity of purpose. The routine. The camaraderie. God, remember all that? So great.

Do you know what nobody talks about though? All the fuck-fuck games. Which is nuts, because that’s how the real memories are made. Think back to some of the best moments from your time in. I’m willing to bet that your mind didn’t jump to that time you totally crushed it on some fitness test, or how you got an award for doing your job.

No, I’m going to wager that you’re thinking about some hilariously idiotic thing you and your buddies did to make the time fly while you were doing some other stupid thing your boss told you to. Like this:

Be All You Can Be pic.twitter.com/NjY3wM502l

The video, which quickly went viral and has been viewed more than 629,000 times, was uploaded to TikTok on Oct. 9 by Evan Kanney, who based on his other posts appears to be a specialist in the Army.

The short and objectively funny clip shows soldiers “cutting grass” (note the scare quotes) along a fence line with shovels as the service’s recruitment theme plays in the background.

Now, the video is not actually a recording of soldiers being punished for screwing up as some have suggested. Rather, it’s a perfect example of what happens when you leave a bunch of bored service members standing around for too long. In this case, they’re killing time while they wait for gas for the lawnmowers, which they immediately start racing back and forth.

I’ll be totally honest: I love this. It’s not like it’s going to inspire me to head on over to the prior service recruiter’s office at the nearest strip mall — I’m too old, too out of shape, and enjoy my life too much for that shit. But it does bring back fond memories, like when I saw a bunch of Marines burst out in song as they filled sandbags in Afghanistan to the tune of Sam Cooke’s Chain Gang.

This video is just one more reminder that junior soldiers (or any of their counterparts in the other services) will do any and everything in their power to make the most menial, pointless, or idiotic task as bearable and entertaining as possible.