For paralyzed veterans, even some of the most fundamental, and crucial, aspects of their daily life have been upended by the coronavirus pandemic. 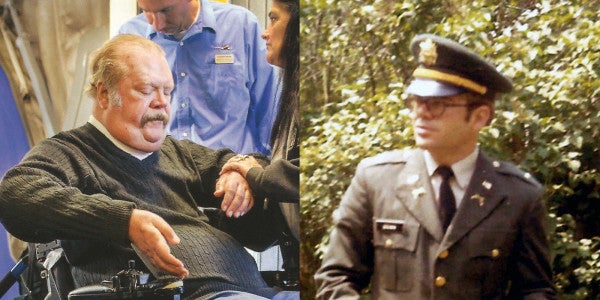 In late-March, as the novel coronavirus (COVID-19) began to spread across the country, Stan Brown was trapped in bed at home.

For six hours, the 72-year-old quadriplegic Army veteran lay there, alone, and unable to move. Earlier that day, Brown had sent home one of his caretakers, because she had a dry cough. It simply wasn't worth the risk.

Then in April a different caregiver, who split her time between working with Brown and at a nursing home, tested positive for COVID-19. For Brown, those six hours spent bed-bound paled in comparison to the fear and anxiety that followed after he got the call.

“Those two weeks after I heard that notice were pretty anxious,” Brown told Task & Purpose. “Of course, every time you feel warm, or get a slight cough, you wonder what's going on. It's a constant worry, with people coughing.”

Brown's daily routine is a carefully choreographed process that relies on a web of support, in which a single severed strand could leave him once again isolated and without help, or worse. It's a delicate system, and one that has been upended by the pandemic.

Now, veterans like Brown are forced to make tough decisions about when to prioritize quality of life over health: Do you send your caretaker away out of an abundance of caution, and spend the next several hours stuck in your wheelchair, or in bed? Or do you risk getting sick?

“It’s a judgment call,” he told Task & Purpose. “You make the call as best you can, but you don’t know. That’s kind of my day-to-day, you try to figure out how your workers are, and if they have symptoms, when’s the last time you saw them?”

Each day Brown wakes up with the help of a caregiver, one of six who work with him throughout the week in shifts, beginning at 8 a.m. and ending at 11 p.m. Every morning at his home in a St. Louis, Missouri suburb, a caregiver helps Brown out of bed, into the shower, and then helps him get dressed. By 9:30, he'll be transferred into his wheelchair.

On a typical day, he's driven to the store to run errands, before heading to his local Paralyzed Veterans of America chapter, where he does outreach, and peer mentoring with newly injured veterans, sometimes meeting them at the Veterans Affairs Spinal Cord Unit in town. Other days there are doctors appointments, or meetings and events with other veterans.

That's all ground to a halt amid the pandemic, which has infected 6.4 million worldwide, killing more than 380,000, with 1.8 million cases and 106,000 deaths in the United States alone, according to Johns Hopkins.

RELATED: The Navy is facing yet another COVID-19 outbreak aboard a warship

These days, Brown mostly stays at home. When he goes out to run errands, he stays in the car as his driver goes inside, and when he heads in to work, it's only when the building is empty, or close to it.

“You’ve been through a lot, with spinal cord injury. Waking up in an ICU with other problems, you're pretty tough by then,” Brown told Task & Purpose. “But now, it's always hanging over your head — catching this from somebody else.”

Those with disabilities that limit their movement, and who are dependent upon direct support from nurses and care providers, are at higher risk of contracting the virus due to the increased likelihood of exposure, according to the Centers for Disease Control and Prevention.

And for paralyzed veterans, contracting the virus can have dire consequences: Because COVID-19, the disease caused by the virus, attacks the lungs, those with paralysis may be particularly vulnerable, as spinal cord injuries can result in impaired respiratory function.

“Under normal circumstances, paralyzed veterans are susceptible to secondary conditions like respiratory and urinary tract infections, pressure ulcers, blood clots and autonomic nervous system dysfunction, that can be life threatening,” said Tom Wheaton, a 53-year-old paraplegic Navy veteran, who serves as the treasurer for Paralyzed Veterans of America.

“We’re constantly in need of quality health care which has been significantly disrupted during the pandemic,” Wheaton continued. “Paralyzed veterans are also at the highest risk for contracting COVID-19, and we’re more likely to suffer serious consequences and even death, since paralysis often affects the lungs. On top of this, many of us rely on outside caregivers for daily survival and can’t practice social distancing even in our own homes.”

But these safeguards, while necessary, come at a cost: Isolation.

“Most paralyzed veterans around the country, we feel trapped and terrified, as we have since mid-March regarding the pandemic,” said Wheaton who has remained quarantined at home since March 13.

Wheaton, whose wife, Angela, serves as his primary caretaker, tries to alleviate some of that stress by making daily calls to a phone tree of other paralyzed veterans.

“And although we're holding up okay, for the people I’m calling around the country, it’s not the same thing,” Wheaton, told Task & Purpose.

After sustaining a spinal injury in 1988 while on active duty in Australia, Wheaton said that he woke up at a Milwaukee Veterans Affairs Center not knowing what his life would be like.

“The key thing for me though, is that when they got me in a wheelchair after being in bed, paralyzed from the neck down for many weeks, and started to get a little function in my arms, I went to the day room where they had a table tennis setup,” he said. “So I started playing and they, of course, made me look like a fool, and I'll never forget them putting their arms around me after, and saying ‘hey, you still have a fulfilling life, here.’”

Wheaton says that had it not been for moments like that, “I really don't know what kind of path I would have had in life.”

With the coronavirus pandemic ongoing, “That’s all disrupted” Wheaton explained.

“The uniqueness of paralyzed veterans is there might be lots of anxiety and depression when we can't get out of the house, but also the [post traumatic stress] factor,” Wheaton said. “Now with being kind of stuck at home and isolated, alone, and not having the opportunity of being out and about to live a fulfilling life as much, thoughts of suicide could actually ensue.”

Additionally, Paralyzed Veterans of America, which counts 16,000 veterans among its members, has raised concern over other day-to-day challenges imposed by the pandemic, like wheelchair repair.

“They're trapped as well because of not only being housebound, but to some degree being bed bound, depending on if they have a manual or power wheelchair, wheelchair repair is not as available as it has been these last 10 weeks,” Wheaton told Task & Purpose. “We normally have great opportunities there. But with this with a pandemic, the idea of people who might contract the virus coming into your home is one issue.”

For those vets who don’t have an immediate family network, these challenges are compounded by a pandemic that has so far showed no sign of letting up.

“If you're there with your wife, maybe, relative, taking care of you, or a small group that can make you feel safe, Okay,” Brown said. “But in my case, there's six different people, and everybody they come in contact with, and that's something that weighs on me, really all the time. There's no end in sight. It's just difficult.”

RELATED: 'I'm wearing the same mask three days in a row' — VA workers detail what it's like on the frontline of COVID-19