Usually it costs money to get meds delivered at home through TRICARE. This bill aims to change that. 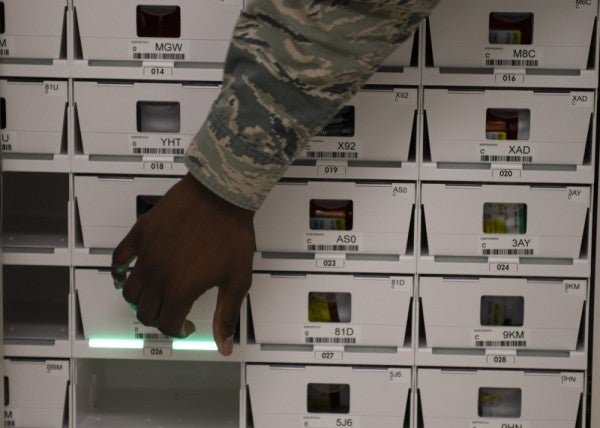 If you’re a TRICARE beneficiary and you need to reup on meds, a new bill in Congress could save you some cash and a trip to the pharmacy at a time when leaving your house might expose you to novel coronavirus (COVID-19).

The bill, Help Our Heroes Access Medicine Act of 2020, would temporarily waive copayments for TRICARE beneficiaries (i.e. service members, retirees, survivors and their families) to get their medicine mailed home.

Currently, beneficiaries have to pay a $10 copay for a 90-day supply of a generic drug and $29 for name-brand drugs via mail order, explained Rep. Elaine Luria (D-Va.), in a press release promoting the legislation, which Rep. Lisa Blunt Rochester (D-Del.) introduced on April 21.

Currently, beneficiaries don’t have to shell out that copay when they pick up their prescription in person at a Military Treatment Facility. The policy incentivizes in-person pick-ups, which is a problem in a time of COVID-19 when people are supposed to minimize their time around others and when some bases are closed to retirees or survivors.

“A lot of the local bases have restricted access to retirees and those eligible because of the COVID outbreak, which has impacted their ability to access medications,” said Jill Lynch, a Virginia member of Veterans of Foreign Wars, on a phone call with reporters hosted by Luria on Wednesday.

The $10 or $29 copays for ordering drugs in the mail get pricey over time, explained Lincoln Smith, vice president of the Virginia chapter of the Military Officer Association of America.

“Many military families, particularly those with special needs, wounded warriors, medicare-eligible retirees and their spouses, they take multiple maintenance medications every day,” Smith said on a phone call on Wednesday

“The Defense Health Agency, DHA, just doesn’t have the authority to modify TRICARE pharmacy copays, so we join you in advocating for a legislative fix,” Smith said to Luria, endorsing the bill on behalf of MOAA.

The bill would amend Title 10 of the U.S. Code to temporarily waive TRICARE copays on prescription drugs during a public health emergency or national emergency such as the COVID-19 pandemic.

If the bill passes, you can order your meds to arrive at home while you rewatch The Pacific for the fifth or sixth time without paying a penny extra and without needlessly exposing yourself to COVID-19.

The waiver would end “on the date of the termination” of the public health emergency, though it’s unclear at this point when the COVID-19 emergency will end.

'A lot on the plate right now'

Luria said the bill was a “common-sense” measure, and it has support from MOAA, VFW, 11 other veteran service organizations, and 11 cosponsors in the House of Representatives.

However, it might still be awhile before the bill is actually considered on the House floor.

“I think the obstacles right now are that there is so much need in so many sectors of both the economy and health care,” Luria told reporters.

For example, Congress is currently fighting over CARES II, another trillion-dollar aid package that would help cities and states through the COVID-19 crisis.

The first CARES act was worth $2 trillion when it passed last month, and other relief bills passed since then bring the total aid funding to nearly $2.8 trillion, The Hill reported on Monday.

“There’s just a lot on the plate right now, and a lot of need out there,” Luria said. “So this is one of many initiatives that we’re supporting to try to get after a whole range of issues that are important for our community.”

This issue in particular hits close to home for Luria, who is a 20-year Navy veteran. On top of that, she said one in five of her constituents are either active duty, a veteran or a family member thereof.

“There’s a lot of people here in Hampton Roads who could benefit from this if they do require prescription drugs during this time,” the congresswoman said.