'The culture within this administration of neglecting the needs of the American people in favor of bloated defense spending for endless wars must come to an end.' 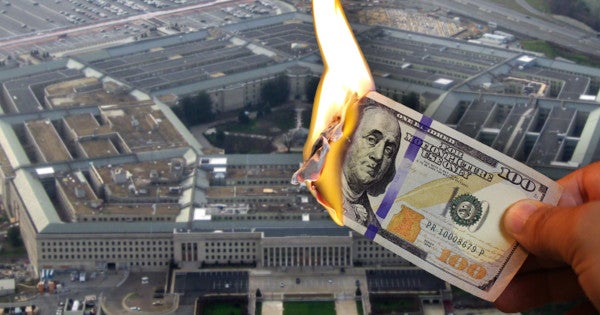 Congress gave the Pentagon $1 billion to “prevent, prepare for, and respond” to the novel coronavirus (COVID-19), but instead the military decided to spend most of the money on bailing out defense contractors by buying things that have nothing to do with keeping people safe from the disease, the Washington Post has revealed.

The $1 billion was allocated under the Defense Production Act as part of a wider $3 trillion COVID-19 relief bill passed by Congress known as the CARES Act.

Shortly after it got the money, the Pentagon began awarding contracts to companies for body armor, uniforms, drone technology, and other items that are not directly related to the COVID-19 response, Washington Post reporters Aaron Gregg and Yeganeh Torbati first reported on Tuesday.

When asked about the Washington Post story, Pentagon spokeswoman Jessica Maxwell noted that the CARES Act did not include any limits specifying that the $1 billion must be spent solely on medical equipment.

The Washington Post also reported that some of the companies that were awarded contracts received money under a separate program as well: The Paycheck Protection Program.

Maxwell said it is “not in conflict or duplicative” for defense contractors to receive money through both the Defense Production Act and the Paycheck Protection Program.

It appears the Defense Department was able to circumvent Congress’ intent on how the $1 billion should be spent because lawmakers were not specific enough about what constituted a response to COVID-19, said Mandy Smithberger of the Project On Government Oversight.

“My concern is that Congress will often give the Department an inch and they'll take a mile, and in this case that they may be taking an overly broad reading of the word ‘respond’ to imply other real or perceived consequences or risks of coronavirus,” Smithberger told Task & Purpose on Tuesday. “But a plain reading and common sense is that Congress did not intend these funds to be used to shore up the industrial base, and if that's what they wanted they would have said so (as they did for relief for other industries).”

The Washington Post’s revelation about the Defense Department using money allocated for the COVID-19 response as a handout to defense contractors is not entirely unexpected.

During earlier talks for a now-stalled COVID-19 relief bill, Senate Republicans wanted to include $29 billion on defense spending, including to replenish some of the money that the Pentagon had transferred in order to build a wall along the southwestern border.

Sen. Elizabeth Warren (D-Mass.), a frequent critic of the Pentagon’s cozy relationship with the defense industry, expressed her outrage on Tuesday at how the Defense Department had spent the money that had been earmarked for the COVID-19 response.

Warren accused President Donald Trump’s administration of working for “wealthy corporations” rather than “working families” during the COVID-19 pandemic.

“Instead of addressing the urgent needs of a pandemic that has killed over 200,000 Americans, the Trump Administration is using money meant to protect lives from COVID-19 to pad the pockets of defense contractors,” Warren said in a statement.

Meanwhile, two Democrats in the House of Representatives are calling for an investigation into how the Defense Department spent the money allocated by Congress.

Reps. Mark Pocan, of Wisconsin, and Barbara Lee, of California, wrote a letter on Tuesday to Democratic leaders urging them to “commence oversight investigations and public hearings into this matter immediately.”

“The culture within this administration of neglecting the needs of the American people in favor of bloated defense spending for endless wars must come to an end,” Lee said in a statement.